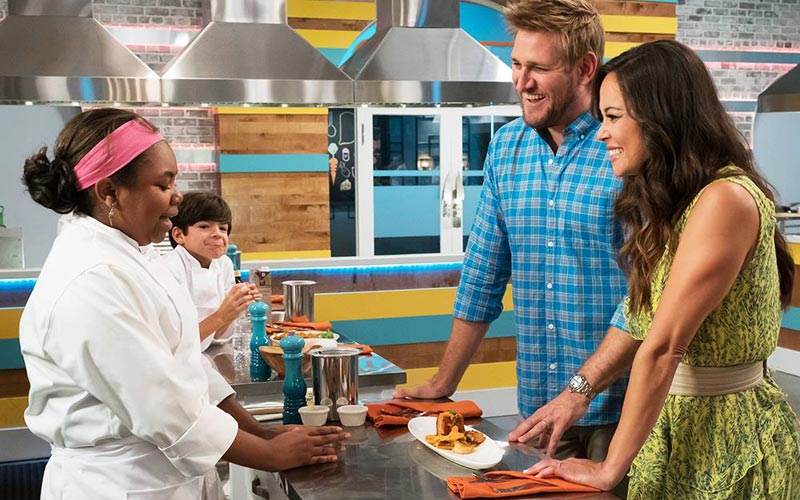 When Top Chef Junior was announced, its youngest contestant was about two years old. He is now 11, because nine years have passed since Bravo said, in 2008, that it would spin off a teen version of its culinary competition.

The show finally but quietly debuted last Friday, but not on Bravo. Instead, it’s on Universal Kids (Fridays at 8), the network formally known as Sprout, which has already renewed Top Chef Junior for a second season. That’s a vote of confidence in the show’s ability to lead the new network and its expanded kid demographic.

It’s a relief that Top Chef Junior is, on its surface, recognizably Top Chef, with the same structure and music, and even some of the same judges and editing. This is not an entirely different show that just uses the label.

But instead of just placing kids in the adult version, more or less, it’s found too many ways to condescend to the kids—and, therefore, to its audience, of kids and adults alike.

That begins with host Vanessa Lachey, who guides the show as if she was a substitute teacher in a third-grade class who really wants the class to like her. Head judge Curtis Stone isn’t any better.

“I love that you’re using the words emulsify and crème fraîche,” he says to one kid during the first quickfire challenge. How surprising that a kid on a cooking show would know cooking words! Stone later draws a smiley face in sauce on another kid’s station instead of giving an actual critique, because perhaps because big-boy words are hard for Curtis, too.

Thankfully, the always delightful Gail Simmons shows up to show them how to actually judge a competition, which is to just judge what’s there. During the season, the three judges will be joined by guest judges, including former Top Chef contestants. Hopefully, they’ll infuse the show with more of the original Top Chef.

The set is brighter and cheerier than usual, and even has faux windows, which is a nice change, because it seems more open and inviting.

But there are some bizarre choices: In the first episode, the kids serve dishes to the judges in a room that’s bathed in stage fog and surrounded by Christmas lights covered in tule, which makes all of this look as classy as a middle school dance.

The kids’ parents—who are on set because their kids are kids—watch from a monitor, and the editing cuts between them and their kids, almost giving them equal time during some segments.

In episode one, at least, the kids don’t get to shop at Whole Foods or another store, but a pretend market that’s adjacent to the kitchen, giving the first episode more of a Masterchef feel. (I suspect that’s simply about time, as kids can’t be on set all day, and a trip to a store could add hours.)

When the kids were cooking, or bonding over their shared love of cooking, it’s pleasant TV, though not exactly captivating. Perhaps that’s because there’s a wide range of quality and technique, and nothing too spectacular in episode one.

As usual, production company Magical Elves has cast well, finding characters rich both in personality and life experience. For example, 13-year-old Fuller has had leukemia three times, and Audrey has celiac disease and wants to cook gluten-free Southern cuisine. They’re heartbreaking and inspiring with all the life they’ve lead in their 11 to 14 years.

In the process of attempting the first two challenges, the kids hurt themselves and fail and cry. While some succeed, there does seem to be more fragility here, or at least more struggle, especially with time.

Top Chef Junior treats its cast in a noticeably delicate way, primarily with a dumb gimmick that requires the eliminated chef to open a jar and find out if they’re actually eliminated or not. (There are four allegedly pre-selected competitions during which the eliminated chef will discover that they’ve been saved.)

I think it’s okay to adapt a show for younger contestants; Masterchef Junior often eliminates more than one contestant at a time, and here, the judges walk out with the eliminated kid, which is a nice touch. (I did laugh when the first eliminated chef was confused by Vanessa’s patronizing attempt at banter as they exited the kitchen.)

In 2016, asked during an interview if Top Chef Junior would ever air, Tom Colicchio suggested that it might be too expensive and too challenging:

“I’m not sure. We have a different budget from network TV, and kids on set can only work six hours at a time, they have to have tutors. We shoot five weeks, six weeks and we’re done. Also, every [adult] chef who comes on the show, if they get halfway through it, they’re all beat, and they start to talk about how tired they are, about how grueling it is.”

That may explain the show’s initial struggles, though Project Runway Junior doesn’t have those, and has set a high bar for kid competitions, treating its young contestants as it treats its regular contestants. The result is a series that has surpassed the original—in both creativity from its young artists, and in entertainment.

So far, Top Chef Junior is nowhere near that bar, nor that of Masterchef Junior. For a show on a kid’s network, it’s great, and there’s enough here to keep me watching. But it’s not yet living up to its name.