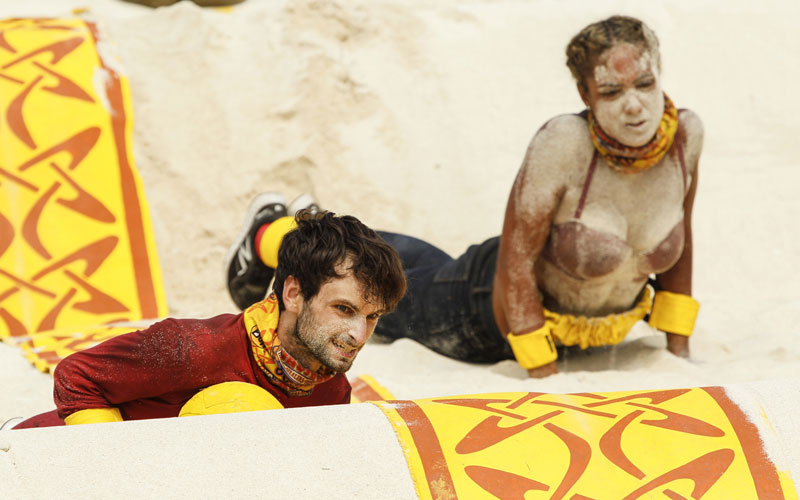 Survivor Heroes vs. Healers vs. Hustlers opened with its usual post-Tribal Council visit to the tribe’s camp. But what came next was different—for this season, for Survivor.

At the red tribe’s camp, Lauren was tending the fire, and a bamboo log in the embers popped. Ben reacted, but the camera didn’t catch what happened. It happened again, a couple quick pops from the fire, and he reacted more strongly. It was a disorienting moment: What happened? Was he hurt?

Not physically. But mentally, yes. Ben, a Marine, had his PTSD triggered by the sounds.

As the Mental Health America notes, “For people with PTSD, it is very common for their memories to be triggered by sights, sounds, smells or even feelings that they experience. These triggers can bring back memories of the trauma and cause intense emotional and physical reactions, such as raised heart rate, sweating and muscle tension.”

Ben walked to the ocean, insisting he was okay, and laid down in the shallow water. In a subsequent interview, he talked briefly about his experiences, how his family was helping him cope, and how this is a reality for so many men and women who’ve served in the military and return home.

That was such a remarkable moment, because it gave prime-time attention to something we don’t really talk much about in our country but is so very important, and because Survivor did that in a way that showed us rather than told us.

We saw it happen, rather than just hearing him talk about it, and that makes all the difference in helping us understand.

Ben’s “the past will eat you alive” became the title of the episode.

Typically when players receive focus at the start of the episode, we’ll see more of them later, probably because their tribe loses immunity. But no: this season’s weird editing continues in that Ben all but disappeared from the rest of the episode after that.

In other disconnected and less-consequential character development:

Ryan’s inability to slither through sand and push a ball with his face got attention, as he helped his tribe lose a reward challenge—so no iced coffee for them. (Tangent: I’m so conditioned to product placement that it’s jarring to me when Probst unveils generic, non-sponsored products as reward.)

But Ryan wasn’t targeted for his challenge fail. The yellow tribe didn’t do well at the immunity challenge, either, and so off to Tribal they went.

I’d be lying if I said I knew who Ali and Roark are, but their alliance plans had Chrissy (rightfully) worried, so she countered by pretending Roark was creating a fictional all-girls alliance, and convinced JP, another person who is apparently a player, to vote with her. By “convinced,” I mean, said “girls alliance” and he immediately decided to vote out Roark. If only all strategizing and lying was that easy on Survivor.

There was obvious tension at Tribal between Roark and Chrissy, especially when Roark called out Chrissy for her last-minute attempt at strategy:  “on the day you needed me is the day you called.” Zing!

I’m not sure I know anything about Roark, and I wouldn’t be a quarter that she was actually on this season of Survivor, but I really appreciated her parting words. She explicitly didn’t blame her exit on the tribe swap, and said, “I always think there’s something someone can do, and evidently I didn’t do that.”

Imagine having the composure it takes to say that immediately after being voted out, which has to be a highly emotional, or at least high-intensity moment. And imagine being that introspective even after being deprived of food and sleep and comfort and friendship for days or weeks.

Those who exit Survivor on such a high note, regardless of their game play, have earned my admiration.

So have those who have not just served our country, but who carry those experiences and wounds with them every single day, even when they’re playing a game on a beach in Fiji.