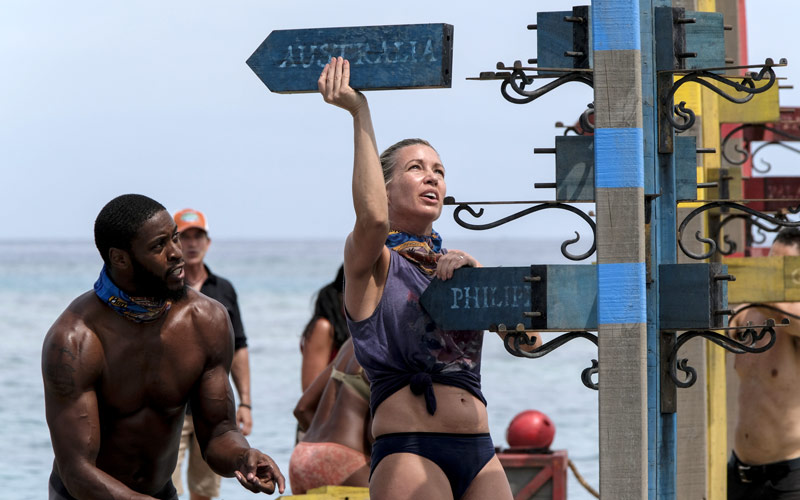 Alan Ball and Chrissy Hofbeck during the combined reward/immunity challenge on Heroes vs. Healers vs. Hustlers' second episode. (Photo by Timothy Kuratek/CBS)

The hero of Survivor Heroes vs. Healers vs. Hustlers episode two was the puzzle—an incredible spinning crossroads sign post with arrows that pointed to locations Survivor has been in the past. The puzzle part: the arrows were different lengths and on different tiers, and when spun, they all had to be able to clear a nearby post.

This was another of Survivor’s brilliantly conceived and executed puzzles, and it was also three remarkable things:

No, it’s not. Survivor can take a while to reach full boil, and I appreciate time spent on character development, but nothing this season is feeling new or exciting to me, even though it is, of course, an entirely new cast.

I have high expectations and want Survivor to wow me constantly, but that’s unreasonable, perhaps especially for a show in its 35th season. And I’d much prefer this to artificial attempts to create drama.

Still, so much of these episodes have felt like familiar beats.

This week’s return of the familiar included an annoying, obnoxiously loud child (Patrick). A crazy, overplaying bald guy (Joe). Someone catching fish (JP, actually bringing in a lobster). A crush (Cole, on Jessica). Cast members who haven’t even had a confessional yet (I don’t know their names).

There were developments. Alliances started to form. Joe found the idol clue, painted on the side of a tree, but couldn’t figure it out because he didn’t connect the icon to the one on the map. Cole explained emjoi to him and then led Joe to the idol and now Joe has it.

Perhaps the issue with this season so far is that, like Ryan said in a rare moment when he wasn’t trying hard to make a joke land, “the people who blend in the best are the ones who escape.” So maybe many of them are lying low enough to force the editing to focus on the louder, more familiar stereotypes instead.

The challenge was situated in the middle of the ocean, which was gorgeous, and had the aforementioned puzzle, was one of the best I’ve ever seen on the show.

Yet there was little tension.

I don’t know if I care enough about any of the tribes to root for one, and when the yellow team—I mean, the Healers—fell so far behind, I found myself expecting them to at least catch up long before they even had their puzzle pieces, because there was so much attention to how far behind they were.

At this point, we know that puzzles can be equalizers, and behold, the Healers pulled out a win.

The actual outcome also lacked tension, with its uncomplicated choice between annoying Patrick and not-yet-adapting-to-camp-life Simone.

Before the vote, Ryan compared Tribal Council to a kid’s birthday party, an awkward metaphor that mostly just made me feel sad for the birthday parties he went to as a child and then had to watch as one of his friends had their torch snuffed and was sent away.

Though if they’d been at this particularly uneventful Tribal Council, they would have been the lucky one.