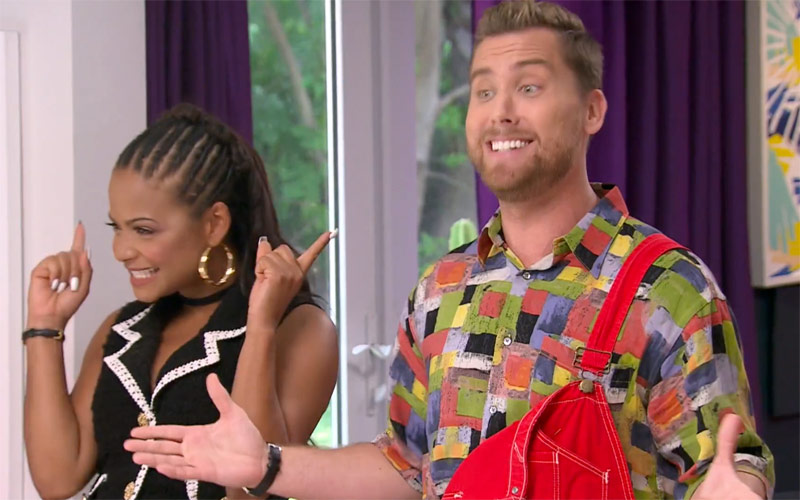 The 1990s were peak MTV for me, especially early seasons of The Real World and Road Rules, and whether it’s an appreciation of the decade’s culture or an opportunity to escape our own, the ’90s are back. MTV revived TRL yesterday, and a new Road Rules is on its way.

So it’s with those joyous memories of 1990s reality TV that I tuned in last week to the premiere of MTV’s new competition series 90’s House, willing to forgive its incorrect apostrophe usage just to wallow in the decade for an hour every week.

The cast’s first challenge was to create 1990s sitcom title sequence. Giving advice about their creations, Lance Bass told the cast that, “most of all, it should make us want to tune in and watch.”

On that, 90’s House (MTV, Tuesdays at 11) failed immediately, with a super-tease that made it look like typical MTV’s reality garbage: grating personalities screaming at each other.

And that’s what they did almost immediately. It was as if a producer whispered to each person before they walked through the door: It’s time—time to be a monstrous jerk! Go!

What does casting a bunch of assholes have to do with the 1990s? That will be the 2010s House, obvs.

Tapping into nostalgia via a competition is a wonderful idea. The execution, though, is atrocious. What kind of competition is this? Why are they even competing? Why do these particular people want to challenge themselves to live in that era? There’s no introduction or context.

The elimination process was incoherent, and even the most basic things are fumbled: the first eliminated contestant transformed from her 1990s outfit to her modern-day clothes as she walked out of the house (clever!) and then held up her phone, making a call because she’d been unable to use technology for so long, but actually just showing us that the phone was on its home screen and she was just faking the call for TV.

There are a few clever ideas here, such as having the cast dress in 1990s-era clothes, and I appreciated the use nostalgia-triggering music (the most transporting song in the premiere for me was Ace of Base’s “It’s a Beautiful Life”).

But those are drowned out by terrible choices that the production made again and again, starting with the cast. The cast members’ interviews are over-produced, and soundbites come across like they’re being repeated, not spoken.

The attempt at 1990s celebrity is particularly laughable: hosts Lance Bass and Christina Milian, and episode one guest Mario Lopez, are all very familiar, whether it’s because of success they’ve had in the 2000s or their overexposure on bad reality TV (Mario Lopez cough cough).

Their presence doesn’t feel special; it feels forced, like the rest of the show.

When it was announced and scheduled, the series was set for VH1, but then moved to MTV. I don’t know if this has anything to do with its absence of quality. It’s produced by Superdelicious, the same production company that produced The 70s House, a show I’d completely forgotten about and don’t think I ever watched; it aired in 2005 and had essentially the same format.

If only those involved—from casting to whoever gave network notes, and this is definitely the kind of show that feels like it had all of the life squeezed out of it by bad notes—had actually watched 1990s-era reality TV and tried, on the smallest level, to return to that aesthetic. Instead, everyone seems intent on turning this into the next Challenge.

I don’t need to bother watching that when there is plenty of 1990s nostalgia on the Internet, like clips from “Hey Dude” and reality shows that didn’t suck.