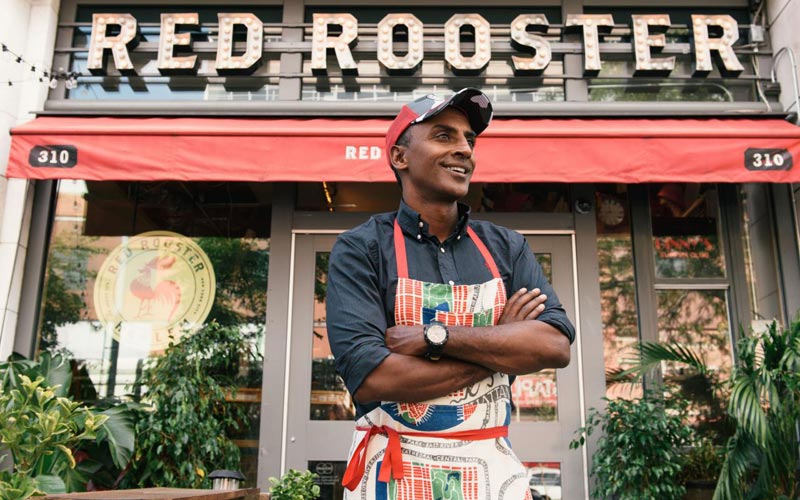 Marcus Samuelsson in front of his Harlem restaurant, Red Rooster.

Chef Marcus Samuelsson will travel to immigrant communities around the United States to meet people and sample cuisine for his new series No Passport Required.

The new series, which will air next year on PBS, “will celebrate America’s diverse cultural mosaic as Samuelsson travels to under-explored parts of American cities to showcase the people, places and culinary flavors of immigrant communities,” according to a press release.

The five-time James Beard Award-winner has been a regular presence on food reality TV, competing on Top Chef Masters and The Next Iron Chef, and judging The Taste and Chopped, among other shows.

Marcus was the first chef featured on Amazon’s Eat the World, giving Emeril Lagasse a culinary tour of Sweden, where Marcus is from, and it was a wonderful episode. His new show seems at least thematically similar, and similar to Anthony Bourdain’s series, just staying inside the country and focusing on American communities and cuisines.

In the press release about the new show, Marcus said,

“Chasing flavors has been my lifelong passion. To now be able to bring viewers on that journey with me to these amazing communities in cities across the U.S. is truly a dream come true. We get to go deep into the markets, pull up to the roadside stands, and be welcomed into homes—all the places where people share and celebrate food together.”

Six hour-long episodes are being produced by Vox Entertainment, which owns Eater, the culinary web site. A press release says there will be “exclusive behind-the-scenes digital content on Eater and PBS.org” and “local outreach by PBS member stations and Eater’s local city platforms.”