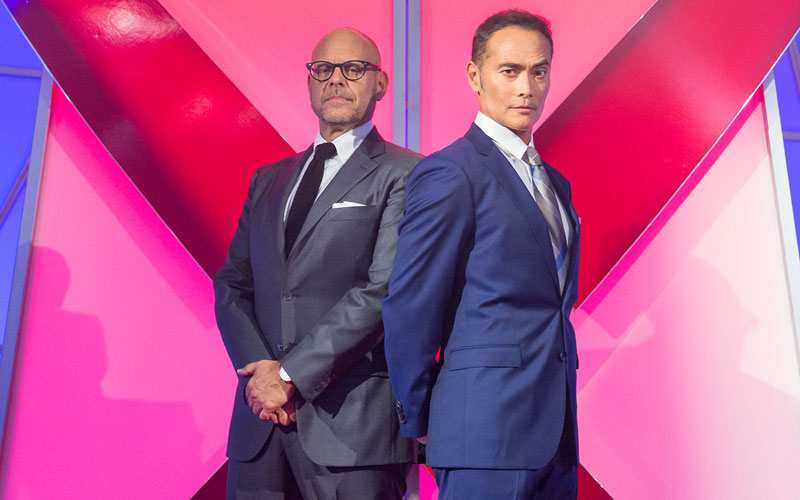 Alton Brown and Mark Dacascos, aka The Chairman, who both star in the new Iron Chef Showdown. (Photo by Food Network)

In the spring, Food Network announced that it would bring back “the elite culinary skill, strategy and stamina of Iron Chef America returns” with “a fresh reboot of the fan-favorite franchise hosted by the incomparable Alton Brown.”

Alas, the show, Iron Chef Gauntlet was a typical Food Network studio-based competition, though one that turned out to be the best kind of its kind.

The new series, Iron Chef Showdown, takes place in Kitchen Stadium (“newly renovated”) and will bring back The Chairman, played by Mark Dacascos.

But instead of a challenger facing an Iron Chef, the show starts with a round that “pits two up-and-coming chef competitors against each other,” with the winner “[earning] the right to face a legendary Iron Chef.”

Here’s how the competition works, according to Food Network:

“In each episode, Alton welcomes two formidable chef competitors to Kitchen Stadium and they battle each other in the Chairman’s Challenge to create their best dish based upon a secret ingredient. Alton is the sole judge to determine which chef advances to the next level: an epic duel against a legendary Iron Chef in the Secret Ingredient Showdown. Then tradition comes to life as Alton, the Chairman, floor reporter Jaymee Sire and a rotating judge panel of two culinary experts oversee the competitor versus Iron Chef action. Ultimately, the two guest judges taste the offerings and determine ‘whose cuisine reigns supreme?’ in these epic Iron Chef battles.”

Essentially, then, it’s Iron Chef with an additional round of competition.

It will be paired with a series that purists and Alton Brown fans will possibly enjoy: Iron Chef: Behind the Battle, which Food Network says “revisits fan-favorite battles from the past.” That happens as “Alton explores, dissects and offers new insights about the secret ingredients, mind-blowing cooking techniques and each Iron Chef’s individual approach to their culinary confrontations.”