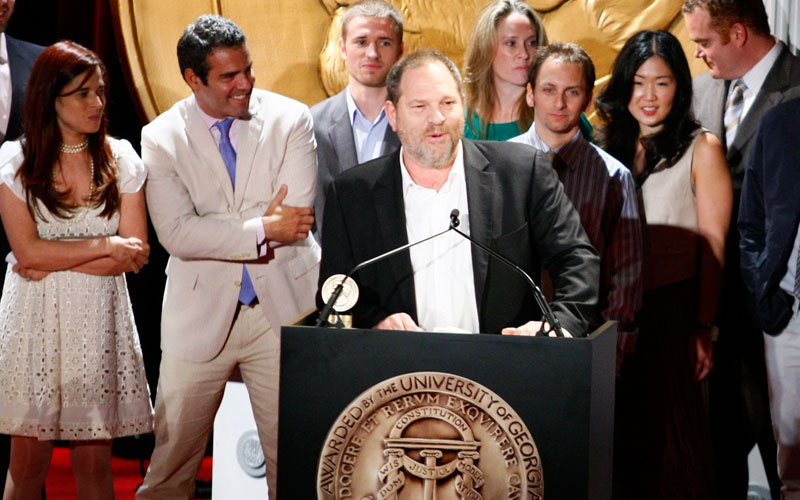 Harvey Weinstein, the executive producer of Project Runway and a prolific film and television producer, was fired from The Weinstein Company after The New York Times published a report documenting almost 30 years of “allegations including sexual harassment and unwanted physical contact” that led to at least eight settlements with women.

The paper’s reporting included interviews with:

“eight women [who] described varying behavior by Mr. Weinstein: appearing nearly or fully naked in front of them, requiring them to be present while he bathed or repeatedly asking for a massage or initiating one himself. The women, typically in their early or middle 20s and hoping to get a toehold in the film industry, said he could switch course quickly—meetings and clipboards one moment, intimate comments the next. One woman advised a peer to wear a parka when summoned for duty as a layer of protection against unwelcome advances.”

Weinstein acknowledged his behavior in a statement to the paper, saying, “I appreciate the way I’ve behaved with colleagues in the past has caused a lot of pain, and I sincerely apologize for it. Though I’m trying to do better, I know I have a long way to go.”

But Weinstein has also threatened to sue the New York Times, with his attorney saying the Times’ report was defamatory.

Bloom, ironically, has represented many women who said they were sexually harassed by powerful men, including Janice Dickinson and three women whose complaints about Bill O’Reilly’s behavior led to his exit from Fox News.

Bloom resigned as Weinstein’s adviser on Saturday. One-third of The Weinstein Company’s board of directors resigned Friday.

Weinstein’s behavior is horrifying. So is the response of those in Hollywood who knew about it but did nothing. As The New York Times’ Jim Rutenberg wrote in a column Friday:

“The real story didn’t surface until now because too many people in the intertwined news and entertainment industries had too much to gain from Mr. Weinstein for too long. Across a run of more than 30 years, he had the power to mint stars, to launch careers, to feed the ever-famished content beast. And he did so with quality films that won statuettes and made a whole lot of money for a whole lot of people.

While Harvey Weinstein and his company has mostly been known for distributing and producing films (including distributing the documentary about sexual assault at colleges and universities, The Hunting Ground), it also produces reality TV.

There are several reality shows in the company’s roster, including VH1’s Mob Wives and TLC’s Welcome to Myrtle Manor, but its greatest television hit is the  Project Runway franchise.

The show originated on Bravo but Weinstein sold the show to Lifetime; was sued by NBCUniversal; and eventually settled and paid NBCUniversal.

Neither A&E, which owns Lifetime, nor Heidi Klum, who is an executive producer on the show, have commented publicly.

The show is, of course, produced by more than one man, and The Weinstein Company isn’t the day-to-day production company on Project Runway. But as another New York Times report put it, “Harvey Weinstein is the one who called — or screamed — the shots, often pushing the company forward by sheer force of will.”

Update, Oct. 8. 7:30 p.m. ET: This story was updated to reflect Weinstein’s firing by the board of The Weinstein Company.