Another of James Corden’s Late Late Show bits becomes a reality series tonight: Drop the Mic (TBS, Tuesdays at 10:30), on which celebrities will face off in rap battles.

The show, hosted by Method Man and Hailey Baldwin, will feature heightened versions of the competition from the CBS show, as celebrities attempt to throw witty shade at each other with rhyme and style.

These are not, however, freestyle rap battles, meaning they’re not improvised.

Instead, the rap battles are written by Drop the Mic’s writers, who include Eliza Skinner and Jensen Karp, writers who are responsible for some of the rap battles on The Late Late Show. (Karp’s web site includes credits for individual battles.)

The writers do more than just the battles.

Another writer, Marcella Arguello, told The Modesto Bee that, starting last January, “she has been creating rap lyrics for the contestants, mini sketches and banter for the hosts of the show as part of the writers room.”

How Drop the Mic’s rap battles are scripted 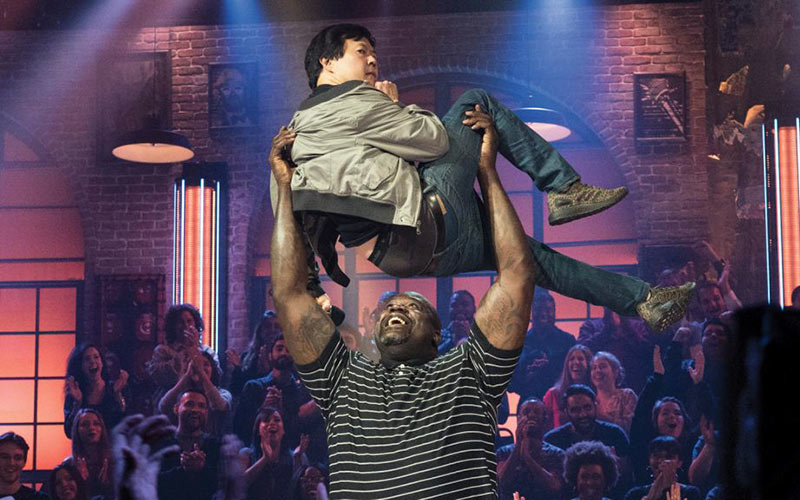 Ken Jeong and Shaquille O’Neal on Drop the Mic season 2. (Photo by TBS)

Karp, who’s also one of the show’s executive producers, described how the process worked during a press conference at the Television Critics Association press tour in Los Angeles this summer.

“We put [the celebrities] together with battle experts and writers, and work with them,” he said, calling the process “really collaborative.”

He said “we have a few hours to work with them, and learn it, and get them out there, but it’s really a lot of them, which is really shocking.”

How much is written “depends on the person,” Karp added, but most are not improvised:

“There’s guys like Randall Park who showed up with three verses. … Schwimmer wrote most of his own stuff on an airplane, and we were, like, This is going to be garbage. And then he came together, and I’m, like, That’s better than what we do for you. … We wrote a lot with Chrissy Metz. She had her own ideas, and we sat and worked with her.

So I would say it’s really a pretty even effort in most cases. But someone like—we had Wayne Brady on the show, and he came in, and he freestyled a lot of his stuff. So it’s really about the person, but I would say, in almost every case, we sit down, and we work directly with him.”

At least one celebrity wanted the writers to amp up comments about her, Karp said:

“When I sit and write the raps with celebrities and we have our writers’ room, everyone comes in and helps and collaborates. You’d be surprised. Mayim Bialik, when we read her some of the ideas, she looked at us. She was, like, You guys can go way harder on me. So you’d be surprised how excited they are to get in there, and you can get away with so much just by rhyming.”

Why all this preparation? “We want to make sure that when you go out there, it’s not corny, it’s an actual rap battle, and I think we’ve achieved that,” he said.

Co-host Hailey Baldwin said at TCA that the celebrities are well-prepared to respond to the insults.

They “are in the mindset where they know already that there are going to be some digs in there,” she said, “and it’s never surprising to them.”