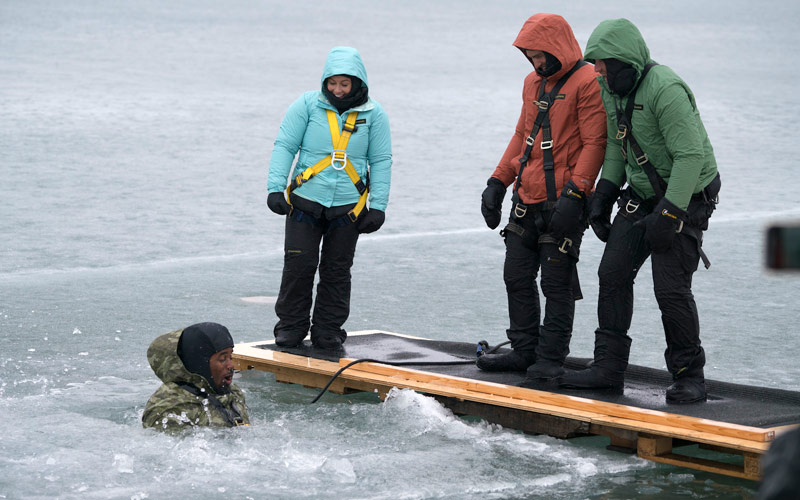 The format Shark Tank introduced—investors pitched by entrepreneurs, who want an investment, a partner, exposure, or all three—is one I can’t get enough of, and has been duplicated frequently, but is rarely done well. The most successful version of the format I’ve found recently include a podcast, The Pitch, and CNBC’s Adventure Capitalists, which starts it second season tonight (CNBC, Tuesdays at 10).

The tweak to the format that Adventure Capitalists adds is a useful one: the investors actually get to really try and test the products in real-world conditions, which expands those fun moments from Shark Tank, when the sharks play with a product, into full segments of television.

All of the products on Adventure Capitalists are in the outdoor adventure space. So, too, is the show: there’s no set, just outdoor locations, which allows them to test in real-world conditions on the water, or a snowy mountain, or in an icy lake. That also means pitches take place with the investors sitting on camp chairs, or tree stumps.

Returning as investors to the 3 Ball Entertainment-produced series are Dhani Jones, a former NFL player and star of a Travel Channel series, and Jeremy Bloom, an Olympic skier and NFL player, and they’re joined by Shawn Johnson East, the Olympic gymnast, who replaces Craig Cooper, who was on season one.

I entirely missed the short, four-episode first season, which aired late last summer, but watching it, I found a lot to like, though those early episodes were finding their footing, and I found cutaway interviews to be jarring, perhaps because of my familiarity with Shark Tank’s version, which doesn’t use interviews with the investors.

But the opportunity to actually test products and see if they held up to the entrepreneurs’ claims is a game-changer—and a lot of fun to watch.

“We kick the tires literally and figuratively,” DJ Nurre, 3 Ball Entertainment’s EVP of programming and development, told me. “They beat the piss out of these products to really see if they’re up to snuff; that’s what you need to do with this type of gear. It’d be so disengeous to look at a coat, and hear someone say, No, seriously, when you jump in this icy cold river, it’ll work, and the someone write a check. They’re actually doing it.”

“These are some type-A, aggressive individuals. You can tell Jeremy all you want—feather the throttle on your Corvette—and he’d smoke the tires,” Nurre said.

Season two has added an additional product per episode. Showrunner Grady Candler and his team film four episodes in three days, so there’s one day during which the investors will be pitched and test two separate products.

Guest investors join them, which 3 Ball SVP of programming Jeff Altrock told me “really changes the dynamic. You have your core three, but the nice thing is, every guest investor comes in and throws a little monkey wrench in.”

Nurre said that “they’re [all] competitive individuals,” and besides being “methodical” in their interaction with investors, are not just pretending for the sake of the cameras. Bode Miller even offers to buy one person’s entire company during an upcoming episode.

CNBC’s Jim Ackerman demands that shows on the network be real. “Jim is very, very very strict about the authenticity,” Nurre said.

The show does set up their investors for success, by briefing them before a pitch—but not about the product itself.

“It doesn’t make sense for somebody to go into negotiations 100 percent blind,” Nurre said. “They are brought up to speed on a particular market, so when they see the product, the product is fresh to them but they are knowledgeable about that market. … To be fully up to speed on what’s trending from bait to motocross is impossible.” Knowing what type of product is coming means that the investors “can educate themselves, talk to their teams back home.”

Altrock added that “if they have a better knowledge of the market, then as long as the entrepreneur’s given them their word, the chances of that deal going through after due diligence are very high.”

And that, of course, makes the show worthwhile for not just the investors and entrepreneurs, but perhaps also for viewers, who can try and buy the products that have been tried out on Adventure Capitalists.