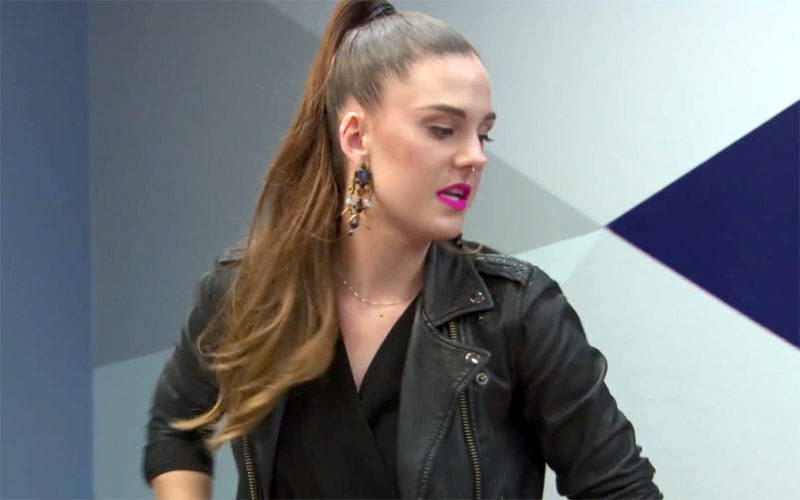 Claire Buitendorp leaves the designers' lounge after being told she was being disqualified from Project Runway 16.

Claire Buitendorp had a different story to tell about her Project Runway 16 disqualification when she was interviewed by a newspaper for a story published late yesterday.

On the show, she admits, twice, to measuring clothing at her apartment. But in an interview with The Lansing State Journal, she says she did not measure anything, but instead just accidentally took a tape measure with her and then threw it away.

The paper’s interview is largely summary with some partial quotes, and rather than trying to summarize a summary, here’s the key part:

The tape measure was in her pocket after a day of filming in the show’s workrooms, she said. She’d forgotten it was there and had it at the apartment for “a matter of hours” before “disposing” of it, she said.

On the show she told host Tim Gunn she used the tape to measure a few pieces of clothing, but Monday Claire said she never used it in the apartment.

“Once I got rid of it, I didn’t think it would be a big deal,” Claire said Monday.

That’s quite different than what she said on and after the show, when she did not mention discarding the tape measure.

In fact, in the contestant’s lounge, she talked about the tape measure in the present tense (“I have a tape measure”) and admitted to using it (“I measured a tank top”).

During Tim Gunn’s interrogation, he said, “Is it true that you’ve been measuring garments in your room?”, and she said, “I have measured a tank top and I have measured the crotch of a pair of pants.”

In a brief Skype interview for a video on Lifetime’s YouTube channel, Claire admits the same thing: “Yeah, I measured some of my own garments. I didn’t think that was something I wasn’t allowed to do.” She also says that, when confronted, “I wasn’t able to fully articulate what was going on.”

Shawn adds that, “in the contract it says you cannot use your own clothes to make patterns,” but they didn’t think that applied to “using a measurement as a reference tool.”

But all of this doesn’t seem to have bothered the twins too much. In the Lifetime video, Shawn says, “We’re getting a lot of traffic to our web site, which is incredible.”

And Shawn said something similar to the newspaper: “Truthfully, getting out in front of people is what’s going to help us be successful. Absolutely.”

Claire and Shawn, who share an Instagram account, have previously only responded to Thursday’s episode with a photo of Claire reading this book and the caption “Reading up on my new social club 😉”.