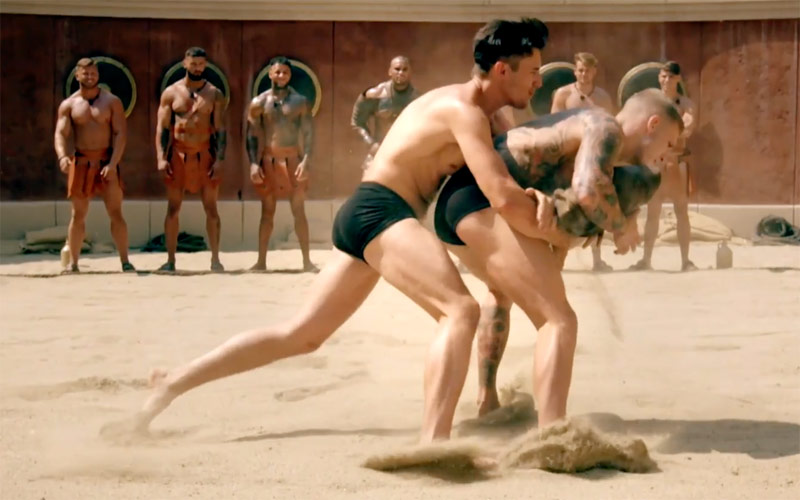 Two Bromans contestants wrestle for a sandbag while others watch, in this screenshot from the ITV2 series.

A month ago, the UK network ITV debuted Bromans, a reality competition that transports eight men and eight women back to ancient Rome, where the men compete as if they were gladiators.

This is not a living history show, nor is it even historical. The awful parts of gladiator life—killing opponents, for one example—has been replaced by eye candy, while actual history, like gladiator slavery, has been reduced to an excuse for nudity.

If you can forgive historical inaccuracy, and also arbitrary competition (eliminations are a combination of producer-selected nomination, votes, and random immunity), and some sexism, you’ll find a streak of The Great British Bake-Off‘s innocence and delight at the center of Bromans.

Did I really just compare GBBO to Bromans? A show with a bunch of white guys pretending to be gladiators with no acknowledgement of the reality of gladiator life, while women compete, too, but are often ignored because they aren’t the actual contestants? Because as I type it, it just gets more and more awful.

Yet watching the first episode, that was easy to miss because of all the charm. One contestant observes, with true wonder, that the drinks, provided by the production, are free: “it’s all included!”

In the first episode, men are barely wearing clothes when they arrive in their modern clothes, and are quickly taken to a coliseum, where they had to strip naked and were then shackled by other men.

It’s unapologetic objectification, not that the contestants seem to mind. (Before the series aired, one contestant posted a photo of his “thigh tattoo” to Instagram, but the tattoo was not the photo’s focal point.)

The homoeroticism arrives long before the challenges that ask them to wrestle in the sand, which may explain why the show cuts away from actual nudity quickly to introduce the bros’ girlfriends, who are there, too. They’re also competing in these challenges; in the first, they have to dig through sand to find a “sack” of clothes for their man (the two losers get thongs).

The physically demanding challenges they take part in could be Survivor challenges, but with the cinematography and slow motion, plus the extreme physical demands, the show seems like Steve Austin’s Broken Skull Challenge smothered in a layer of Roman cheese.

That cheese is the reason to give Bromans your time.

The reveal of the emperor is particularly wonderful, and host Tom Bell, in pseudo-character as “Dominus,” is taking nothing seriously, whether he’s blowing a ridiculous horn to start a competition or announcing “who becomes ancient history.”

There’s also sly commentary from the narrator, who mocks things like their reliance on modern conveniences (hairspray, for example).

I’m amused that some in the UK have reacted negatively to this, only because—despite its very real problems—this bottom-of-the-barrel show is so much better than the trashy TV here in the U.S.

Just as I’d love to see a version where the girlfriends are equal contestants and the show acknowledges how they’re living in luxury compared to actual gladiators, I’d love to see an American network pick it up to demonstrate how reality TV can be unserious without being unappealing.

Because Bromans does not take anything it is doing seriously, from its title to its thongs.