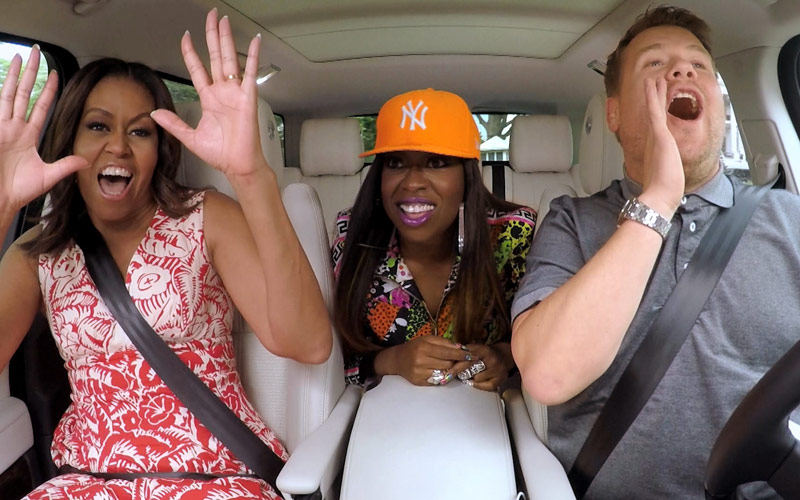 First Lady Michelle Obama and Missy Elliott with James Corden in July 2016 on CBS' Carpool Karaoke, which was adapted into an Apple Music series. (Photo by CBS)

Apple’s first two attempts at original content have both been reality series, and both have essentially fallen flat: the first was a Shark Tank-like competition series, Planet of the Apps, and the second was a spin-off of James Corden’s Late Late Show bit, Carpool Karaoke.

This week, Bloomberg reported about Apple’s efforts, and has two very telling anecdotes. Both reveal that Apple executives prioritized things other than quality content.

Carpool Karaoke was supposed to be Apple Music’s first series, but its premiere was cancelled and it was mysteriously delayed, and now we know why, thanks to Bloomberg:

“Days before Apple Inc. planned to celebrate the release of its first TV show last spring at a Hollywood hotel, Chief Executive Officer Tim Cook told his deputies the fun had to wait. Foul language and references to vaginal hygiene had to be cut from some episodes of Carpool Karaoke, a show featuring celebrities such as Gwyneth Paltrow, Jessica Alba, Blake Shelton, and Chelsea Handler cracking jokes while driving around Los Angeles.

While the delay of Carpool Karaoke was widely reported last April, the reasons never were. Edits were made, additional episodes were shot, and Apple shifted resources to another show.”

So in other words: remove all the things that wouldn’t be included on television, where people can watch for free, and then ask people to pay for this watered-down version. (The Apple version does have a slightly different format.)

In January, at the Television Critics Association winter press tour, Carpool Karaoke executive producer Eric Pankowski said that he, James Corden, and executive producer Ben Winston “couldn’t be more excited to work with [Apple] as their first series.” He added:

“They’ve been incredible partners. Jimmy Iovine and Robert Kondrk, the whole team there, Eddy Cue, have been so incredibly supportive of us and the show and really embraced the creative and letting the creative be what it is.”

That was months before Apple’s CEO decided he didn’t like some jokes.

Meanwhile, the delay of Carpool Karoke helped to sabotage the other series, Planet of the Apps, which had Gwyneth Paltrow, Jessica Alba, and will.i.am hearing pitches from people coming down a fake escalator. Apple executives did the opposite with that series:

“Around the time Apple delayed the release of Carpool Karaoke, its top brass also decided the TV unit should move up the release of Planet of the Apps, a reality competition series in which entrepreneurs pitched celebrity investors on their idea for an app, so it would make its debut on Apple Music in time for the company’s Worldwide Developers Conference in June. Apple execs loved the show and thought it would endear the tech giant to software writers. The show wasn’t supposed to be released for a couple of months, and there was no marketing plan in place—a vital step in the age of too much TV. Apple pressed ahead, and the show came and went with little fanfare beyond a couple of savage reviews.”

I wrote one of those reviews.

I’m not sure more marketing or more time would have helped Planet of the Apps, because the format was devoid of personality or purpose, so perhaps it was a gift that fewer people knew about it.

Despite these false starts, Apple is staffing up and moving ahead, Bloomberg reports, and wants to release several “comedies and emotional dramas with broad appeal” (i.e. no foul language or body parts) in 2019.

But if any of those are going to be a success, Apple is going to need to learn to trust creators and their audience, and give them the financial and promotional resources they need rather than micromanaging some fucking words.