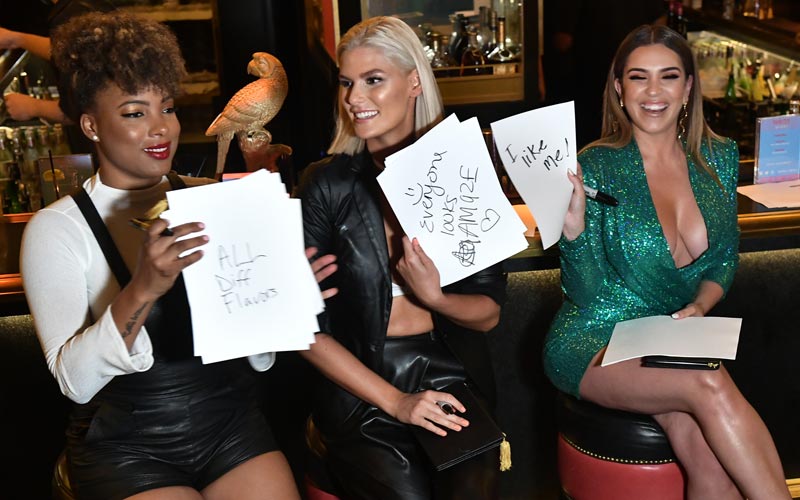 WAGS, aka Wives and Girlfriends of athletes, debuted in August of 2015 and returns for its third season on Nov. 1. A spin-off, WAGS: Miami, followed in 2016, and is currently airing its second season. And thus summer, E! ordered WAGS: Atlanta, making WAGS the next Real Housewives-style franchise.

All three WAGS series are produced by the same company: Machete Productions, which was founded in 2011 by Amber Mazzola, a producer and editor who’d worked on shows such as Kathy Griffin’s My Life on the D List. (The company name, her bio says, “was originally Amber’s nickname in post for being so creative in piecing together the content of her shows.”)

Machete also created The Profit with Marcus Lemonis, which returns with its next season in late November on CNBC.

Each episode is filmed over about five days, so a 10-episode season of Miami was 10 or 12 weeks of production.  L.A., Atlanta, and Miami will next have eight-episode seasons, so that’s eight or 10 weeks of filming five days a week.

Filming is also complicated by the nature of a show that follows its cast members’ lives. “Our production is really very fluid—which is annoying at times, because you plan the schedule and have it all ironed out, and it always changes,” Mazzola said. “We try our best.”

“At the beginning of a season, we have all these story meetings. We bring each talent in and ask them what’s going on in their life and what things they have coming down the pile, so we can put it in the calendar,” she said.

But: “These girls’ schedules change like the wind. We may have a schedule one day, and then all of a sudden, they have something else going on—they’re going on trip with their husband, or they’re going to see the game that they didn’t think they were going to go to,” she added. “We try our best, but inevitably we’re calling talent and saying, ‘Hey, can you shoot with us tomorrow?'”

Casting for the two series—and especially the new spin-off in Atlanta—has been easier and more difficult. The show’s popularity “opened the doors for us, but it doesn’t make it easy by any means,” executive producer Amber Mazzola said.

“We are able to get access and get more ins to people because we’ve developed great relationships with sports agents and publicists, so we’re able to hit their rosters a little bit easier,” Mazzola said. “On the other end, we get a lot of people that are sending us their bios and resumes and saying, ‘We’re perfect for your show.'”

Of course, they’re often not perfect. “Either they’re not dating an athlete or they’re just a jersey-chaser,” she said.

Mazzola said “we prided ourselves” and “wanted to differentiate ourselves” by ensuring that the cast members really are wives or girlfriends of athletes.

Casting for Atlanta, she said, “we really do want them to be dating someone or be married to someone,” though the show has made exceptions for people who date athletes but might not be with one currently. For example, “Olivia didn’t have one person in particular. She was a hopeless romantic, but she’d really dated a lot of these athletes and was looking for an athlete,” Mazzola said.

Keeping WAGS true to its title is complicated by time passing and the nature of professional sports.

“We’re in the third season of the show and not all of our guys are playing any more, but people fall in love with the characters, so we don’t want to lose our characters,” she said.

And Mazzola is one of those who loves the characters.

“I just had a baby four weeks ago and I’m at work right now, not because I’m crazy but because I truly love what I do and who I work with,” she told me. “I’m literally here in my office pumping and having story meetings about WAGS and the Profit, because it’s just so much fun. I can’t believe that this is my job.”