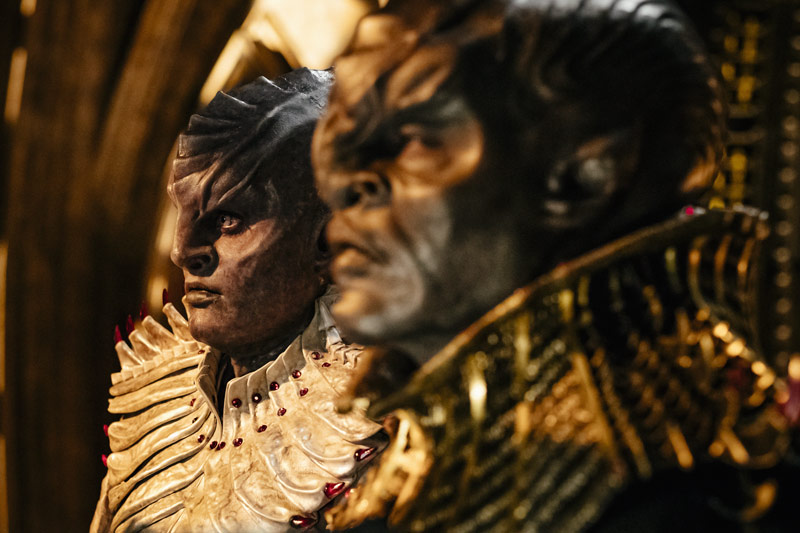 The premiere of Star Trek: Discovery, the CBS All Access series that had its debut on actual television last night, started aboard a Klingon vessel. The series takes place about 10 years before the original series, and the Klingons are decidedly different.

The prosthetic work that brought them to life is by Alchemy Studios, and specifically Glenn Hetrick and Neville Page—the effect artists and creature designers who may now be best known as Face Off judges.

They are often critical of contestants for creating work that makes it difficult for actors to emote, and ironically, that is what’s happening now, because their work has been called out by critics.

Here are a few examples, with emphasis mine:

On social media, viewers have also not been kind. One person, Bonnie North, tweeted, “Take a ’65 VW Beetle, demolish and crumple the hood = Klingon face makeup.”

Not everyone hated it, though. On Syfy Wire, Tara Bennett wrote, “I also loved the reframing of the Klingons. The makeup by Glenn Hetrick’s team, and their design by Neville Page, take the race of warriors in a more primal and religious space which feels very fresh for the universe.”

Glenn and Neville discuss their makeup

So how did the makeup end up like this?

First, Gizmodo tracks the long history of Klingon appearances, and how much it has changed and evolved over time, both because of technology and budget and for story reasons.

Meanwhile, USA TODAY talked to Hetrick and Page—and actor Mary Chieffo—about everything from the design concepts to the actual application of the new look.

Neville says they wanted to “respect the canon and the franchise. The Klingons need to look like Klingons,” but adds, “this was a good opportunity to expand on it. The Klingons have ridges on their heads for a reason. What is that reason?”

Hetrick said that, “The Klingons come from an empire  containing a ton of planets. If you think about the cultural diversity that we’re able to exhibit in just a few thousand years on our planet, what would it be like if we existed on a group of planets?”

In the USA TODAY video below, Glenns ays, “We know how important it is to fans, so our goal is really to evolve the design without being dismissive of the canon design.”