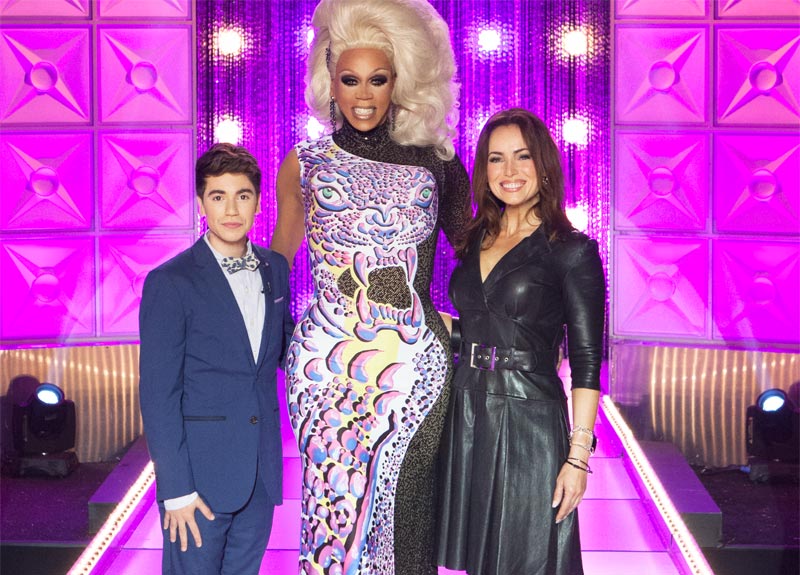 RuPaul’s Drag Race won three Emmys this weekend, including the second in a row for Ru as host, but also the first Emmy win for costume designer Zaldy Goco, who designs all of Ru’s gowns.

Zaldy has been the “exclusive designer” to RuPaul for all nine seasons of the show, according to his web site, which has highlights of his work for RuPaul.

However, the specific episode he was nominated and won for was one in which RuPaul did not appear in drag, and that has some fans of Zaldy’s work and Drag Race wondering why.

Zaldy—who guest judged the season 9 episode during which the queens did drag makeovers for members of the show’s crew—won the Emmy in the “Outstanding Costumes for Variety, Nonfiction or Reality Programming” category. (He was also nominated in the same category last year for “Keeping It 100!”; that nomination specified that his work did not include the contestants’ looks: “Costumes: RuPaul only.”)

This year, he was nominated and won alongside Perry Meek. The specific nomination was for the season nine premiere, “Oh. My. Gaga!” and specified the work that each did:

When he’s not in drag, RuPaul wears suits by Klein Epstein & Parker, including the yellow suit he wore during that episode.

I asked Zaldy about this: the work he was nominated for, and what he thought about winning for an episode that did not include his design:

“Thank you! I am honored to be supported by my peers and thrilled to have won! I feel like the members of the Academy are aware of my long collaboration with Ru and voted as such. Even though the episode had Ru not in drag I believe it was a collective acknowledgment.

I know when I was voting for categories I had the nominated episode in mind, but the whole series is also there. The way the nominations work, per episode, I think is most important for categories like best director since many directors work on different episodes of a series.

I love Gaga and having just designed outfits for her Joanne tour, having her and Perry as part of this night have made this a very special year for me!”

How the Emmy process works

Emmy nominees submit one or more episodes for voters to consider, depending upon the category. A guest actor in a drama, for example, submits just one episode, while the show itself would submit six episodes for its category.

For individual achievement categories, peer groups (for example, in this case, other costume designers) vote, and then the actual “nominees choose their best work of the season,” according to the Television Academy. All 22,000+ members of the Television Academy may vote for winners; the Academy says that process includes a step during which voters “verify they’ve watched the content” submitted, now “via a secure online platform.”

Why would voters vote for a person’s collective achievement, then? One reason: Quantity and time.

As TV Guide reported last year, there were 84 episodes for 2016 drama and comedy series nominees alone, never mind all of the individual categories and episodes. Joyce Eng wrote, “It’s safe to say no one will make all that the time to watch over 100 episodes in that period.”

And again, that’s just two categories, and there are 25 categories in which reality TV and nonfiction programs and crew members are nominated, never mind all the scripted categories. And there were just 15 days to vote this year.

In other words, as Zaldy mentions, it’s likely voters choose winners based on their knowledge of shows and individuals’ past or collective work.