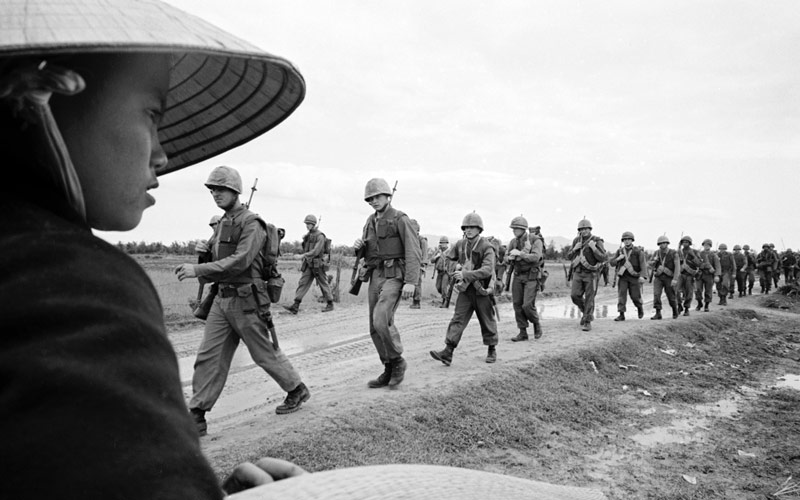 Marines in Danang on March 15, 1965 during The Vietnam War. (Photo by The Associated Press)

The best work of nonfiction television to air this fall covers one of the most challenging and contentious periods in the history of the United States: The Vietnam War.

Directed by Ken Burns and Lynn Novick and with a score by Trent Reznor and Atticus Ross, The Vietnam War is 10 episodes and 18 hours that debut tonight on PBS, airing one episode a night from Sunday to Thursday, and again next week, and is also available online. (How to watch.)

That is, of course, what a Ken Burns documentary does best. Facts, compellingly, carefully, and soberingly presented until a full picture emerges.

“We try super hard not to sort of put our thumb on the scale or to promote an agenda, political or otherwise,” Burns said. “It’s enough to spend 10 years just trying to wrestle this story to the ground, and we felt that it was hugely important because the story is rarely told from more than one perspective.”

The documentary doesn’t include the usual talking heads; there are no academics or historians or famous politicians.

Instead, Burns and Novick’s goal, as Novick said at TCA, was to “try to look at it from the bottom up, the experiences of ordinary people who lived through it from all sides.”

People wanted to talk: “There was enormous interest in having their story told, that there’s a chance for people to share experiences that were very important to them and seminal, informative, sometimes very, very painful, but also moments in their lives that have stayed with them when they wanted to have a chance to share them with the wider world. It was really our privilege to collect this testimony from all the sides,” she said.

If any of the events or themes from The Vietnam War have resonance in today’s political or cultural climate, Burns reminded everyone that “we’ve been working on this for 10 years” and said:

“This is a story about mass demonstrations all across the country against the current administration; about a White House obsessed with leaks and in disarray because of those leaks; about a president railing against you, the news media, for making up news; that it’s about asymmetrical warfare, which even the mighty might of the United States Army can’t figure out the correct strategy to take; and it’s about big document drops of classified material that’s been hacked, that suddenly is dumped into the public sphere, destabilizing the conventional wisdom about really important topics and accusations that a political campaign reached out to a foreign power at the time of a national election to influence that election.

This is the film we started in 2006, and every single one of those points are points about the Vietnam War having nothing to do with today.

History doesn’t repeat itself. We’re not condemned to repeat what we don’t remember. It’s that human nature never changes. And Vietnam, particularly because we live in this stew of rancor and alienation, has the opportunity to help us understand even more precisely not just what went on there … [but also] helps us understand [the] present moment.”