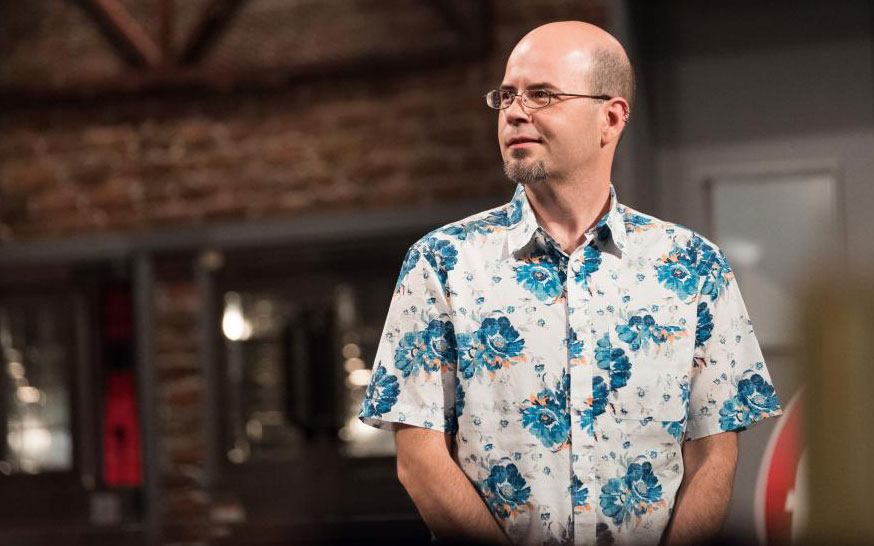 It’s also an “all-new concept,” Jason told me, so not similar to other “baking competitions that we’re seeing on Food Network.” In the first of two rounds of the Best Baker in America  (Food Network, Wednesdays at 10), contestants have to show off skills with a basic baking dish. “Sometimes the most basic recipes are the most hardest to do,” Jason said.

The elimination round challenges contestants to put their own creative twist on a traditional recipe and “give us something different that we’ve never seen before,” he said.

Looking for the “Best Baker in America” sounds at least thematically similar to The Great British Bake-Off or ABC’s version, The Great American Baking Competition, and I asked Jason if he watched the UK series. “I do watch that show,” he said, adding, “I’m really liking the baking that we’re bringing to light through Food Network” and other shows. That’s because, he said, “We’re showing people that baking is something that you should try if you enjoy really getting down to almost being a scientist. Baking is not one of those types of things where you can just throw a little bit of flour, a little bit of sugar, and a little bit of liquid together. It’s really a different love of the cooking world.”

Going from a contestant on Food Network show to judging one is “totally different world,” Jason said. “I’ve always wanted to be a judge on the show, and I had expressed that one time,” which is one of the reasons he thinks the network gave him this as his first post-Food Network Star gig.

Judging, Jason told me, “is the best of being bost worlds.” As a contestant, “you have one thing that is on your mind, and that is always devlivering that one dish that makes the judge like you and want more.”

He said being at the judges’ table “actually makes me have the utomost respect from judges” of shows he’s competed on because they’re weighing so many options all at once.

Will Food Network Star Jason Smith have his own show?

We talked briefly about how contestants on Food Network Star are often comfortable in front of the reality show’s cameras, especially in interviews, but then freeze when asked to talk to the camera to introduce their food. “Nerves plays a lot into that,” he said. “They let the camera get the best of them.”

Jason said he felt like he had an advantage: “I’m always the same good ol’ Kentucky Jason, but when the camera comes on in front of me, it’s like I’m talking to my best friend right there. I turn that camera into someone I know, and it makes me feel more comfortable. That’s one thing that I had in my pocket is that I love being on camera and I didn’t let the nerves get to me as bad.”

With his love of baking and being on camera, will Food Network be giving Jason his own show as a prize for winning Food Network Star? I asked if there was a show in development or even production.

“That’s one thing that we’re always working on different things,” he said. “It’s one of those things right now—it’s kind of all up on the air, so we just have to wait and see how it all comes together. Being on Best Baker right now, that’s what we’re focused on, and we’ll see what comes next. You just never know where you’re going to see me or what’s going to be next.”

Jason added, “I love this world, I love being in the television and food world, and I strive for it every single day. And I love coming up with new stuff and new concepts, so we’ll just see where it takes me and see what’s in the future.”