I’ve really been enjoying America’s Got Talent season 12—many of the acts have consistently wowed me, from Diavolo, the act that belongs Las Vegas tomorrow, to ventriloquist Darci Lynne Farmer. I had a lot of quibbles with the results and golden buzzers during the Judge Cuts episodes, and always wish for fewer singers and more variety acts, but I’m mostly enjoying what I’m watching.

What’s frustrating me the most this season, however, are the judges’ responses to magic acts.

A sense of wonder, awe, and appreciation for magicians’ work would be fantastic, but the judges’ willful naiveté is just lame. For just one of many examples, when (a particularly bad) escape artist was buried alive, they acted as if he was really trapped and going to die after a minute or two underground.

Please. I can’t tell if the judges are being serious or stupid, but it has the simultaneous effect of making them look ridiculous while also undermining the craft involved in magicians’ performances.

There are some talented magicians who’ve performed on AGT over the years, and their performances are made much more difficult by the environment: a live audience plus cameras plus viewers at home with DVRs and pause buttons.

Whether it’s close-up slight-of-hand or big stage magic, their tricks are under a lot of scrutiny—and that was evident last night during the second episode of the semifinals.

How did Colin Cloud predict? The camera showed us

During Colin Cloud’s performance semifinal performance, the camera seemed to give away the trick.

Colin presents himself as a mind-reader/clairvoyant/mentalist, and even pretends he knows whether he’ll make it through to the finals tonight.

For his latest performance, after apparently successfully identifying Howie Mandel’s iPhone unlock code, Colin used responses to a tweet posted by NBC’s account last week asking people to tweet a random celebrity, city, and object. (The tweet currently has 2,200 replies, though that’s today, after the trick was broadcast.)

Some members of the live audience last night had small print-outs of those tweets, with multiple tweets printed in two columns. Colin had Simon Cowell and Howie Mandell gather printouts at random, and asked Mel B to choose one of those. He then asked Heidi to pick an individual tweet. 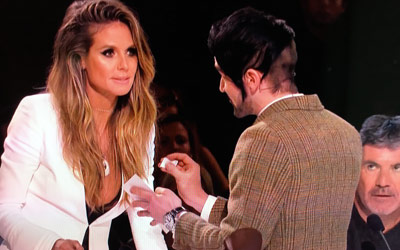 A screenshot of America’s Got Talent judge Heidi Klum and mentalist Colin Cloud, who has something concealed in his hand.

As Colin held up the card with tweets that Mel B selected in his left hand, he was gesturing in front of it with his right hand. A camera positioned stage left, behind Colin, showed that he had a small white rectangle palmed in his right hand—the hand he was moving over the card—as he said, “Heidi, you only get to choose one.”

While something in his hand is clearly, absolutely visible in the east coast broadcast, as you can see here, that was edited out the reveal for the version on YouTube. The online version cuts away as he says “Heidi, you only get to choose one,” and momentarily shows Howie and Mel B instead.

(I’ve asked NBC for comment about the edit, and will update if I hear back.)

In both versions, when Heidi says stop, Colin appears to press his hand against the card, and then his hand is empty. He then points to the tweet she just allegedly chose. My read of that is that he had a sticky print-out of the “Ellen. Rome. Cheese” tweet (it’s a real tweet from last week) that he stuck to the card—slight of hand that was briefly captured by the camera.

It’s still an impressive trick, and his reveal—a pre-recorded video that showed him going undercover throughout the week to illustrate that his prediction was definitely pre-determined—was a fun climax.

But let’s please stop pretending this is supernatural, specially when America’s Got Talent itself gives away the trick.