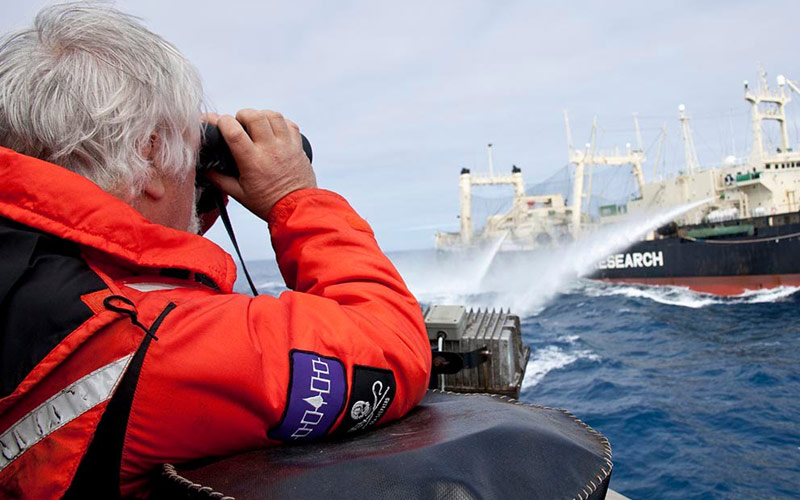 There could have been a new season of Whale Wars on Animal Planet this year, but Sea Shepherd was unable to intercept or engage with the Japanese fleet, and won’t try again this year. That means no Whale Wars season eight.

That ends a 12-year campaign that was documented on television in five full seasons and two shorter seasons of Whale Wars, which remains one of the best unscripted series ever, delivering real-world drama in a beautifully constructed package.

If you haven’t seen it, watch it.

A person with knowledge of the production told me that Animal Planet paid for production of a new season of Whale Wars for this year, but during its campaign that started last December and ended in March, Operation Nemesis, Sea Shepherd wasn’t successful, so the footage wasn’t interesting enough to justify a new season.

That’s an understandable decision but still an unfortunate loss for high-quality television.

The series elevated reality TV, and also elevated the profile of Sea Shepherd while it brought attention to the fact that the unnecessary and illegal slaughter of whales was continuing—even after the International Court of Justice ruled that their operation was commercial, not scientific, which was the excuse used to continue to kill whales.

In the past, Sea Shepherd’s efforts were so successful they led the Japanese fleet to stop whaling at one point. But not this year.

In an essay published Monday, Paul Watson explained why they weren’t successful this year, and why they won’t return to the Southern Ocean this year:

“What we discovered is that Japan is now employing military surveillance to watch Sea Shepherd ship movements in real time by satellite and if they know where our ships are at any given moment, they can easily avoid us. During Operation Nemesis, the Sea Shepherd ships did get close and our helicopter even managed to get evidence of their illegal whaling operations but we could not physically close the gap. We cannot compete with their military grade technology.”

Also in the piece, Watson celebrates Sea Shepherd’s previous success, and says that they will continue efforts to stop whaling there—and around the world:

[…] What Sea Shepherd has accomplished over the last 12 years demonstrates what people of passion can accomplish with few resources despite heavy multi-government opposition.

The Japanese whalers have been exposed, humiliated and most importantly have been denied thousands of lives that we have spared from their deadly harpoons. Thousands of whales are now swimming and reproducing, that would now be dead if not for our interventions.”