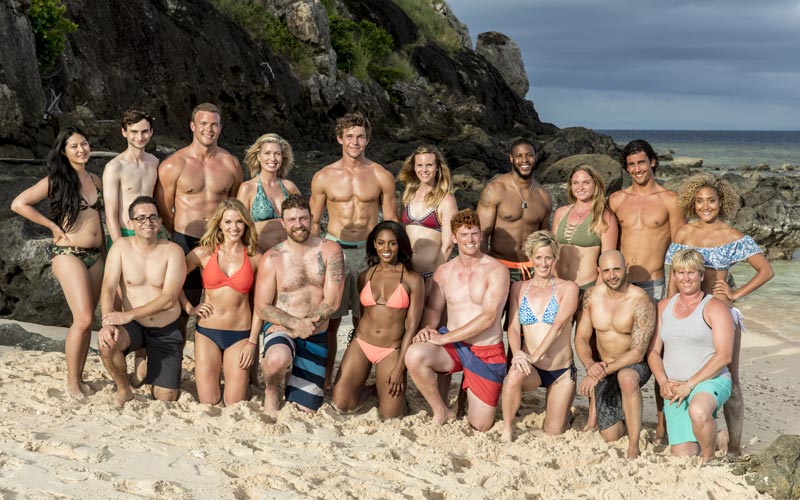 The Survivor Heroes vs. Healers vs. Hustlers cast. (Photo by Robert Voets/CBS)

The super idol is back for the first episode of Survivor Heroes v. Healers v. Hustlers, which officially announced its cast this morning, though most of the cast has been known since May. Also returning: tie votes at Tribal Council, which were eliminated for Game Changers.

Not announced today: the major change to the final four.

The most interesting information published today, with the lifting of CBS’ embargo, is from Josh Wigler’s interview with Jeff Probst, in which the host and executive producer discusses the return of the reviled super idol.

It will be hidden on the boat from which the cast gathers supplies, and Probst said:

“It’s an immunity idol. It’s a super idol, which means it can be played after the vote. But here’s the twist: it’s only good at the first Tribal Council. If the person who finds it ends up winning immunity and doesn’t end up going to Tribal, they have to send it secretly to somebody on the losing tribe, so they can use it.”

At least it’s here just one episode, but still. Go away super idol. (Actually: go away all idols!)

But don’t expect any other idol changes: “It’s an element of the game. We may change it next year. For right now, we like that,” Probst said.

Hidden immunity idol clues will literally be painted onto trees for this season.

The origin of the subtitle, the return to Fiji

The cast is divided “based on how others see them,” as Jeff Probst explains in this cast video, which I read as a synonym for “based on a completely arbitrary system we made up and forced contestants into even though they don’t fit but now we have a theme so yay.”

In his interview with Wigler, Probst offered a fascinating tidbit about how he labels potential cast members:

“When I do my little casting sheets, I write ‘LW’ if it’s likable winner. That to me says if they get on the show, then I’m good with it, because they’re a likable winner. No matter who wins, we have 75% of them as likable winners, so we’re good to go.”

He also explains the origin of the ridiculous subtitle:

“About halfway through, we had a football hero, a doctor, a nurse practitioner, a bellhop and a fisher. I just kept looking at the cards and trying to figure out what it was, and ‘healer’ was the word that really broke it. You could see ‘heroes,’ and you could see ‘hustlers.’ Finding the ‘h’ word, that came later. ‘Healers’ was the one that broke it. We pitched it to CBS, but they wanted the name to ring. You go, ‘Oh, god. Okay. I get it.’ Once we finally went, ‘Heroes and Healers and Hustlers,’ then we had it.”

And finally, he discusses the show’s return to Fiji, which will produce four back-to-back seasons filmed there (this is three of four):

“What I like about it, and I think I speak for our entire crew, is that we’ve traveled so many places over so many years. The landscape has changed a lot. There are more people. It’s harder to find deserted islands. The economy has changed in a lot of places, including the U.S., and we can’t afford some of the places we used to. Politics have come into play. Safety has come into play. But Fiji is this little beautiful and still undiscovered place, which is crazy. Everybody knows Fiji, but they don’t, really. It’s stunning. I’m torn, because I want people to know it’s beautiful, but I don’t want to lose it! You’ve seen the water here. It’s spectacular! The islands! They’re utopia!”