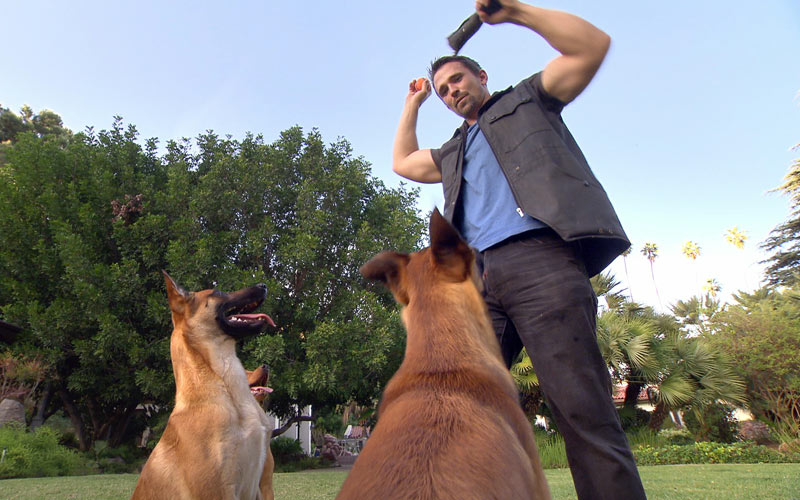 Rescue Dog to Super Dog has a clear, explanatory title that makes its simple, life-changing premise clear: On each episode of the Animal Planet show (Saturdays at 10), trainers Nate Schoemer and Laura London each find a shelter dog they start training to help someone who’s in need of assistance.

What’s remarkable is that the show doesn’t present the dogs as instant, magical solutions for their new owners, who need help with everything from anxiety and depression to diabetes.

“We really want to stress: No, you can’t train a dog that fast. There’s so much work that’s involved,” Nate Schoemer told me at the Television Critics Association press tour. “We’re still working with these dogs,” Nate said. “It’s not something that happens overnight.”

That comes across in the show, which is based on a format from the UK’s Channel 4. It emphasizes that training is ongoing; at the end of the first episode, both dogs are still identified as service dogs in training.

“That was very important for both of us, because far too often people try to take advantage of things they see on TV. The last thing we want is somebody to go out there and say, Look, they trained a service dog in just a few months—we could do it, too! Pay us $20,000!,” Nate said.

They searched all over Southern California for the right dogs, after meeting and spending time with each person who’d be featured in the series in order to learn about “their disability, their struggles, and what they really think a dog can do to benefit them,” Nate said.

Laura London told me it was not only important to find the right dog—which required “aligning of the planets and all sort of candle lighting, divine intervention,” she joked, adding that “they’re all outstanding animals and they deserve great homes,” but that not all “would be good service dogs.”

But it wasn’t just the dogs who needed to be ready. Laura and Nate had to make sure a dog’s new owner understood the responsibility that was coming.

“We needed to make sure they were ready to take this on. It wasn’t a gift—we were asking them to work for this,” she said. “Are they at a place in their life where they’re ready to do that?”

Those featured on Rescue Dog to Super Dog were ready, and their stories—both before and after they start working with their new companions—are touching.

“It’s going to a very heartwarming tear-jerker,” Nate said of the show. “It’s going to inspire you to want to get up and go save a dog, or go volunteer, or go help someone with a disability, or if you have a disability, be courageous and go out and tell people you need help.”