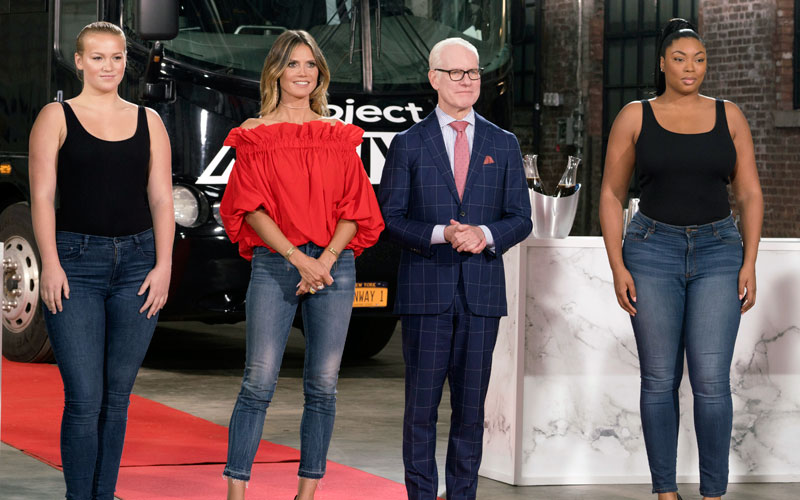 I’m always glad to have Heidi Klum, Tim Gunn, and the rest of the Project Runway family back on my television, even when it means watching Tim Gunn turn into Laura Linney’s character from The Truman Show as he hawks products every time he rides a bus into a warehouse.

Season 16’s announced change was the size diversification of its models, who now represent the actual range of women’s bodies instead of just model bodies. The designers mostly embraced this change, perhaps because they were aware of the Internet pile-on that would occur if they complained about having to design for the real world.

But the premiere had more changes in store, some of which worked and some of which didn’t. That started with the “Model Mirror,” essentially a confessional camera for the models, who previously were mostly mute. At this point, I’m ambivalent about that; I’d be glad to hear what the models think about their clothes and their designers’ work and process, but only if it really adds to our understanding.

Also: The 90 minutes are a bit unnecessarily bloated as it is, so if we’re just looking for things to fill time, maybe just cut things out, like Project Runway Junior does?

What didn’t work for me almost immediately were the twin designers, Clair Hair and Shawn Shaved; no fair, we need to be saved.

By the time that montage arrived, I hadn’t really identified their speech pattern, but once the designers imitated it and identified it, it was impossible to ignore

But it’s not their speech pattern or their confidence that was grating. It was the WE’RE TWINS WE DESIGN TOGETHER NOW WE ARE APART PAY MORE ATTENTION TO US.

After she was not eliminated, Shawn stomped back into the waiting room and announced “I HAVE POTENTIAL”  and then her sister Claire started bawling because Shawn didn’t get sent home. Me too, Claire, me too.

The editing gave them so much attention I thought for sure one of them was done, especially when Shawn gave her model a nice top and then left the rest of her naked except what looked like aluminum foil she’d wrapped around her model’s waist. (Zac Posen called the shorts “club kid, a little hooker-y; Nina Garcia said they were “a little bit of a cop-out.”)

But Brandon was ultimately just fine. So were most of the other designers; even the weakest clothes weren’t terrible, which suggests we’re in for a strong season.

Behind the scenes of the Project Runway runway

The runway segment itself introduced new flourishes to Project Runway, and while they are not dissimilar to the subtle changes Shark Tank implemented last season—changes I liked—they felt unnecessary here.

The editing included behind-the-scenes footage, starting with the judges chatting and getting seated, and since that preceded the runway show, it fit.

But watching a stagehand helping models up stairs backstage as another model gets ready to walk out broke up the pace and focus of the runway show. And we just didn’t need to see someone backstage explaining, in the most stilted way possible, that the models were going to go out to have their clothes inspected by the judges. That didn’t need more explaining or more footage; Tim Gunn does a fine job of bringing out the models for closer looks.

Likewise, someone thought we needed to see the winning designer, Deyonte Weather, jumping up and down behind the screen instead of just seeing his silhouette.

Deyonte won for an incredible dress made with a print fabric that he positioned flawlessly. But that made him less notable to me than the fact that he came on Project Runway while his wife was about to have their kid. Is he going to go see the kid when it’s born? Or will he just have to wait until the end of the show/sequester?

The designer kicked out this week was ChaCha, who took fabric that’s “like a clown and a unicorn and a child,” Zac Posen said, and put it over his model like a colorful trash bag, thereby hiding her figure and doing very little design work. That’s too bad, because ChaCha’s pre-season work had potential—sometimes wacky, but always interesting.

That describes the premiere, too, which gave me what I want from Project Runway, and some unnecessary flourishes and drama (CLAIRE! SHAWN!), but still altogether an appealing package.