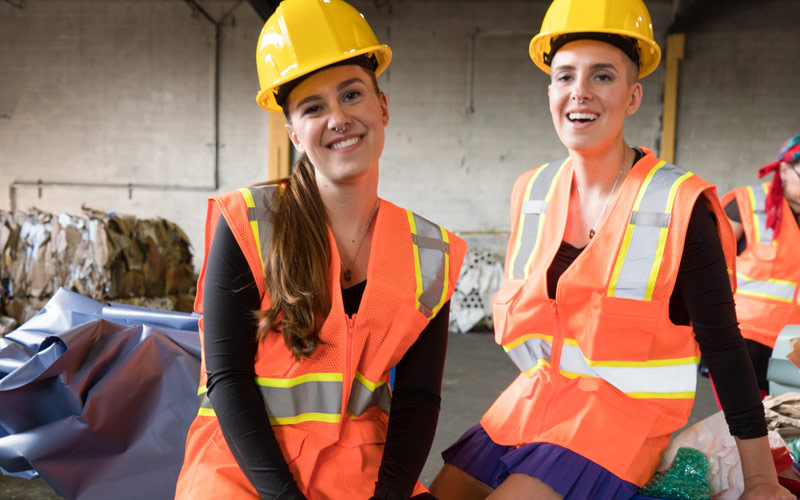 Claire Buitendorp and Shawn Buitendorp take time away from complaining to pose at a recycling center where Project Runway 16 contestants found materials for their first unconventional materials challenge. (Photo by Barbara Nitke/Lifetime)

In the summer of 2015, VH1 aired Twinning, a competition between pairs of identical twins that tested their abilities when separated. The winners were Claire Buitendorp and Shawn Buitendorp, who are now using their supertwin powers to destroy a season of Project Runway.

Okay, that’s too strong, and they are bringing a lot of energy to this season, though in the same way that a tsunami brings someone a refill of their water. It’s too much, too destructive, and so unnecessary.

I am very much enjoying the rest of the cast and the work so far, but I am wondering what we’re losing with the twin focus. It’s not like they’re entirely stunt casting; this profile of them explains what they offer, and is also more than the one-dimensional version of them we’re getting on the show.

At least twice, Tim Gunn walked into the Project Runway workroom, which was strewn with oddly clean recycled material, and exclaimed “Good heavens!” Later, when one team of designers told him their team was named “Ballin’ on a Budget,” his expressions suggested he’d just been hit in the face with a wad of lemon pulp.

That’s about how I felt every time the editing turned its attention to a twin and her drama or tears or both. It’s just so often that the show’s attention turns to them and their uninteresting problems: with the challenge, with their models, with the show, with their self-doubt.

‘You really need to change your perspective’

Claire Hair helpfully explained that her twin Is Shawn Gone Already was struggling because she had to work on a team, use unconventional materials, and design high fashion for a “larger” woman, none of which she’d done before.

Both Claire and Shawn couldn’t stop calling Shawn’s model “curvy,” which was better than Shawn’s first term, “larger” but still seemed more like a stand-in for another word than an actual descriptor, and finally the guest judges had enough: Maggie Q said, “She’s not curvy. …. If you think that’s curvy, you’re going to have a real problem designing in the United States. Because that is not curvy. So you really need to change your perspective.”

Earlier, when Shawn called her model a “curvier girl,” Anne Fulenwider, Marie Clarie’s editor-in-chief, whispered to Maggie Q, “I think she’s skinnier than I am.”

The twins took their team down with them, whirling around the workroom in a tornado of self-doubt and attention-seeking. Sentell’s actual design, plastic wrapped around his model in such a way that I was pretty convinced I could do better with a trash bag and three minutes, did him no favors and he deserved to be sent home for it, but he also probably spent too much time helping his demanding teammates.

The morning of the runway show, Shawn started by demanding things: “WE NEED A BELT FOR ME.”

Amy said of her teammates, “Watching this, is—honestly, it’s painful.”

It is. And I adore Project Runway and so many of this season’s designers. But the twins’ presence on the show is—well, I’ll just let the twins describe:

Claire: “I call it noxious.”