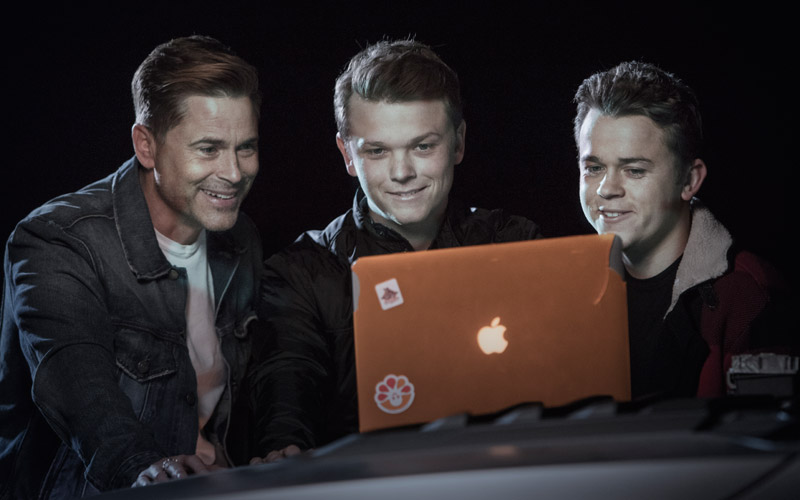 The stars of The Lowe Files: Rob, Matthew, and John Owen Lowe. (Photo by Richard Knapp/A&E)

The Lowe Files is two shows trying to be one: a family road trip with a dad who happens to be famous, Rob Lowe, plus a pedestrian supernatural show. Alas, the ghosts scare off the better parts of the series (A&E, Wednesdays at 10), which involve Rob hanging out with his adult sons, Matthew and John Owen.

At the TCA summer press tour last week, the show’s executive producer, Tom Forman, said, “What you are seeing on air is as close to Lowe family home movies as it could get. As it turns out, these guys are super entertaining, so it’s not as painful as watching, like, a friend’s home movies.”

That’s what I was drawn to in the trailer, and I rather enjoyed those parts of the show: stopping on the side of the road, or getting donuts and causing a scene because Rob Lowe and a camera crew are in a tiny donut shop, or screwing around and scaring each other. Rob’s kids distancing themselves from his sexist guy-banter in the car is a particularly interesting moment in tonight’s premiere.

It turns out the show was very much filmed as a weekend family road trip.

“We would get together on Fridays, travel, shoot Saturday, Sunday, and all go back to our lives,” Rob Lowe told TV critics. “So it was very much fly by the seat of your pants—which was also the fun of it, because it’s meant to be a real rough and tumble. None of it’s staged. It totally is what it is.”

What it is, alas, is a lot of nothing made out to be something, just like all the other supernatural shows that have preceded it.

The Lowe Files begins with a disclaimer that says, “What you are about to see is 100% authentic. Nothing has been staged for television.”

Forman admitted that, essentially, it’d be easier to fake things, but Lowe insisted upon authenticity:

“All credit to Rob, who has kept us honest through this process, because it would certainly be cheaper and easier, especially given their schedule, to have faked some of this stuff, like that is in our reality TV bag of tricks. We know how to do it and make it feel real. When I was developing the show and stalking Rob, because I just wanted to be in the Rob Lowe business, he expressed some casual interest and then, like, extracted three promises: It would be totally authentic. It would never be dumb, and that ‘Don’t Fear the Reaper’ would be the theme song. Those were our guiding principles.”

In tonight’s episode, while ghost hunting, they use gadgets and gizmos, including an Ovilus, a device that’s programmed with a bunch of terrifying words, which it blurts out occasionally, purporting to be picking up on ghosts’ communication. (Popular Science did a great piece on how these devices are devices are pseudoscience—bullshit that’s perfect for reality TV shows that need to visualize the existence of nothing.)

Rob Lowe told TV critics, “Don’t ask me how. Don’t ask me the science. I don’t know.”  That is evident, and is likely to disappoint fans of other paranormal investigation shows, or fans of true scientific inquiry.

John Owen, it turns out, is quite a skeptic, and at least at first, throws cold water on overheated ghost hunting nonsense, which is a lot more fun than the actual ghost hunting.

“I’m not trying to play the skeptic,” he says, but the show needs more of his skepticism, because it’s great. I particularly loved how, while ghost hunting, he called out his dad for unintentionally twisting the evidence of a ghost’s presence: “That’s not how she died; she was strangled,” he says. “You’re building the narrative.”

I was disappointed that his skepticism faded during the episode, though I’m sure that if I was in a dark, creepy place with gadgets flashing lights at me, I’d get creeped out, too.

Because there’s nothing here—no ghosts show up, and I’d guess if they found Bigfoot in a future episode, we would have heard about it by now—the editing has to work overtime, and does a fair job with obvious recreations that set the mood, giving some background about the place they’ll be investigating.

Still, it’s a lot of pump-priming for no water at all, and those recreations and ghost stories are yet another distraction from The Lowe Files’ best discovery: that a family hanging out is much more interesting than anything supernatural.