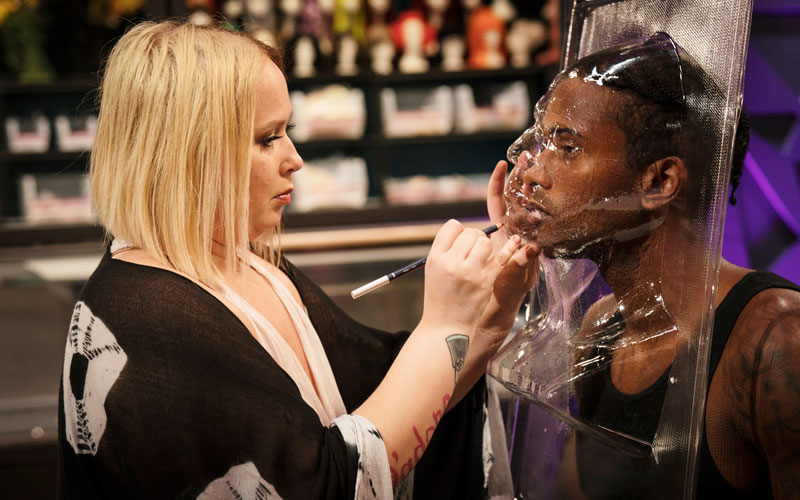 The format Chopped introduced to reality television has proved to be an enduring one. Not just for the Food Network series, which has been on the air since 2009, but for other series that have produced similar competitions with one-off episodes that follow a similar structure.

The latest is Face Off: Game Face, which is unapologetically the same format: four contestants, three rounds, three judges, a $10,000 prize. The difference here is that Game Face is an extension of a successful show, and is bringing its contestants—and their experience, both as artists and experienced reality TV competitors—into a more rapid-fire version of its usual contest.

The result is all of the best of Face Off in a more compact, faster-moving package.

Because there are three challenges in an hour, everything is collapsed, and the fluff isn’t missed: The judges talk to the contestants and look at makeups at the same time; there’s no duplication of deliberation and explanation, just the rationale for eliminating a contestant; and there’s less of McKenzie Westmore having to say the same things (Judges, why don’t you take a closer look as everyone fast-forwards through my dialogue?).

As a judge, Rick Baker kind of fades away next to Ve Neill and new judge Eryn Krueger Mekash, who’s done work for American Horror Story and many other films and shows.

Face Off’s foundation challenges now have their own show

In the first episode of Face Off: Game Face (Syfy, Tuesdays at 9), the challenges asked the contestants—who are all returning all-stars, except for in one episode that will air later this season, the spin-off’s pilot episode—to create makeups that either incorporated something physical or were inspired by an image.

They were all a lot like the smaller, quicker Foundation Challenges that used to precede the Spotlight Challenge on Face Off’s regular season, so if you missed those, this is the show for you.

They essentially have to create something from nothing in 90 minutes, which is even more impressive than usual.

Despite the time limitations—or perhaps because of them—the makeups often end up looking cleaner, more realistic, and less mask-like than weaker Face Off designs (like many from this past season). They’re not sculpting or molding, just creating and painting.

There’s another noticeable difference from the regular series: it appears to have been shot at a higher frame rate than Face Off, giving the show the “soap opera effect” (something I have a vicerally negative reaction to on new televisions that force that mode, smoothing out action in 24 frames-per-second films and TV shows by adding extra frames and making them look like soap operas). It doesn’t look bad here, just noticeably different: crisper, more immediate, but less cinematic.

If it gives a more detailed look of these artists’ work, even better. Face Off: Game Face certainly does that, and is a welcome companion to the main series.