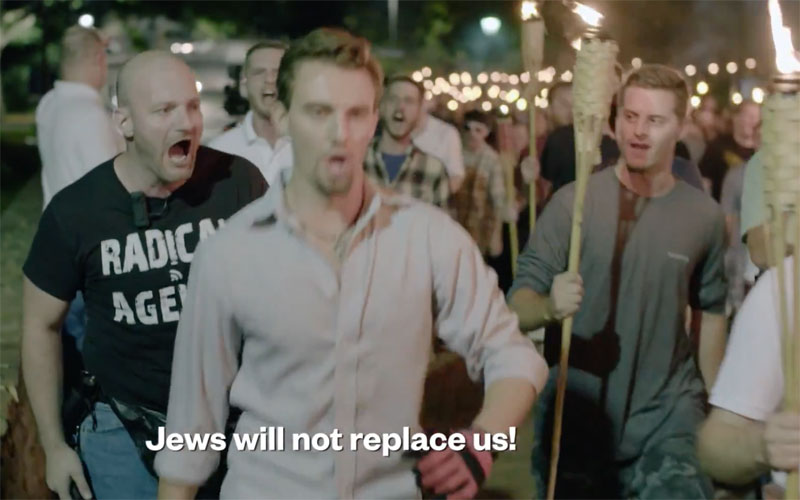 A scene and subtitle from VICE News Tonight's Charlottesville: Race and Terror.

Why are white supremacists, KKK members, and others emboldened by what Donald Trump said during his press conference yesterday, doubling-down on what his first response to a white nationalist rally and violence in Charlottesville, Virginia?

And why are so many of us—including Democrats and Republicans, activists and executives—so absolutely horrified about what the president said? And horrified by those who want us to shut up about it?

This paragraph makes it clear:

“President Trump buoyed the white nationalist movement on Tuesday as no president has done in generations — equating activists protesting racism with the neo-Nazis and white supremacists who rampaged in Charlottesville, Va., over the weekend.”

Here is Trump in his own words from a Trump Tower press conference, according to a transcript:

“I think there is blame object both on both sides. I have no doubt about it. You don’t have doubt about it either. If you reported it accurately, you would say that the neo-Nazis started this thing. They showed up in Charlottesville. Excuse me. They didn’t put themselves down as neo-Nazis. You had some very bad people in that group. You also had some very fine people on both sides.”

So who exactly are those “very fine people” on the side of the white nationalists/white supremacists/Nazis?

You’ll meet them in this 22-minute documentary, Charlottesville: Race and Terror, which was the entire Aug. 14 episode of HBO’s VICE News Tonight. Elle Reeve reported the story.

It opens with torch-holding white men (and a few women) marching Friday and chanting “Jews will not replace us” and “blood and soil,” a Nazi chant, and gets worse from there. (In case you or someone you know still thinks there were others there: Even Fox News says “we’ve been unable to find the very fine people protesting with the white supremacists.”)

Warning: It’s incredibly disturbing, and includes footage of the car that plowed through people—including a woman who was killed—demonstrating against the white supremacists.

But especially for those who think that “both sides” are equal, maybe hearing what that side actually thinks will help explain why it’s unacceptable and morally repugnant to equate white nationalists and people who oppose them.