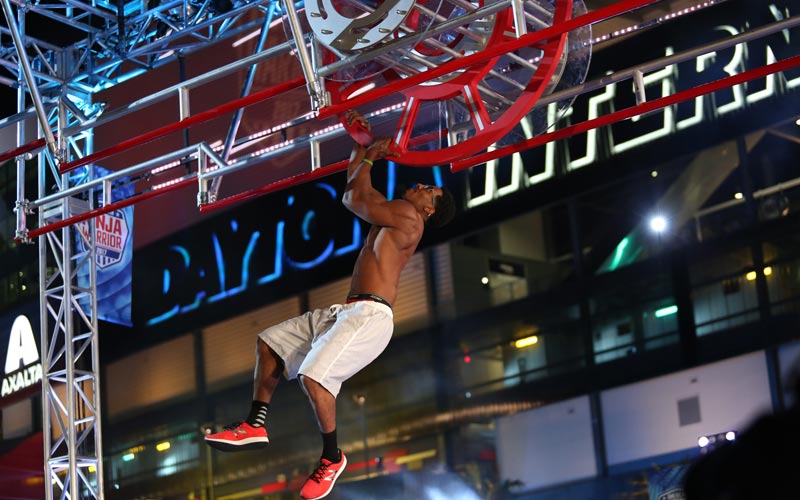 “5, 4, 3, 2, 1—go!” Another finalist took off on the American Ninja Warrior course during the Daytona Beach city finals. It was a surprisingly cool Saturday evening in early April, and we were standing in front of the massive Daytona Beach Speedway—the back of the grandstand, which looks out toward the parking lot and has a new facade—as the NBC show came to life.

Standing behind the camera and support crews, I watched contestants run the course—and watched the crew do their jobs, which included the obvious (camera operators, producers) and things that were very show-specific (people with squeegees and towels who wiped up all splashes; a person who put a sponsored towel on a fallen contestant’s shoulder before their interview).

The course is narrower than it looks on television, and the lights are mostly pointed at the contestants’ path—meaning they run with television lights shining into in their faces. The grandstands are very close to the course, and so contestants also get to hear fans shout helpful things like “give it everything you’ve got!” and useful instructions such as “put your feet on it!” It’s even more pressure added to the already physically challenging obstacles.

Behind the course, on the side from which viewers watch because that’s where the cameras are positioned, there is a lot of activity, and a lot of equipment. There’s a relatively clear path all the way along the course for cameras to move, and behind it, towers made of scaffolding for other cameras; massive tubs of towels and more fans. Behind all that were rows and rows of boxes for all of the equipment, with production trailers hovered on the periphery of all the activity.

American Ninja Warrior is a big production, but also a surprisingly nimble and efficient one.

Besides observing and reporting all the activity, I interviewed one of the people who literally makes sure the show comes together: Kristen Stabile, the executive vice president of productions at A. Smith & Co. Productions. She’s in charge of the logistics of moving all of this from city to city for three months every year, and then to Las Vegas, and provided a lot of the insight below.

Filming on NBC’s American Ninja Warrior takes one-third of the year, and that doesn’t include editing. And it’s not the only Ninja Warrior show that A. Smith and Co. are working on: They’d just delivered its last episode of Team Ninja Warrior to USA, for a premiere that was a week and a half later.

As the audience settled and waited, and before hosts Akbar Gbaja-Biamila and Matt Iseman went up to their viewing platform, they greeted VIPs and took photos with kids while standing on the course’s starting platform. “Come on up!” Matt said to one family. They certainly are among the celebrities that ANW has created.

Filming eventually began after dark, at about 9:35 that Saturday night, in front of an audience of families and kids, contestants’ friends and family, and superfans who had been in the stands since before 8—and would later be swapped out, in the middle of the night, for another audience.

A total of 34 people were about to attempt the course for a second time—the city finalists who’d qualified during their previous run. And 125 people were working behind the scenes to make it happen. Here’s how it all comes together.

When does the show film?

Qualifying and city finals film in March, April, and May.

The Vegas finals films in June.

When are the qualifiers and then the city finals filmed?

On television, however, those episodes are separated by weeks and weeks—the Daytona Beach qualifiers for season 9 aired June 26, 2017, and the Daytona Beach city finals was broadcast Aug. 7.

Because the city finals are filmed the next night, the contestants are actually running the course twice in less than two days.  An athlete could run the course at, say, 3 a.m. on a Saturday, and then again at 10 p.m. that night.

Keep that in mind the next time every time you watch someone attempt the course during the city finals.

That also means relatively little time to film all of the content for the episodes. I was observing the city finals on night two in Daytona Beach, and I watched sideline reporter Kristine Leahy filming introductions for the course that would air during the qualifying episode. (She was introducing the course’s obstacles and talking about how contestants who made it through all six obstacles would receive a guaranteed spot in the city finals—which were occurring that very night.)

How long is the show in each city?

Filming those two nights of television requires 10 days total. Here’s how it breaks down:

Those 10 days include four that are 24-hour days for the crew—the two filming nights and two others.

How many people work on the show?

American Ninja Warrior uses 15 semis to transport its “traveling circus,” as executive producer Kristen Stabile told me, which includes 125 people at its peak.

About 75 of those crew members are locals hired in each city, including security and catering.

The show starts with a crew of 35 on the first day of production, and gradually builds to that number.

In cities where qualifying rounds are filmed, the number of crew members varies by day. After filming ends, many leave, but a group stays behind to load out.

How are locations chosen?

“The hardest thing about my job is finding locations,” executive producer Kristen Stabile told me. “To try to keep it fresh” is one challenge, but so are all of the logistics.

The backdrop for the course “is the most important thing. If I’m lucky, every city has one or two locations. There are cities that would love to have us—Louisville, Nashville—it just doesn’t work the way their cities are laid out, as far of their iconic locations,” she said.

Nashville’s main drag was offered, for example, but couldn’t shut off music and noise from nearby bars.

Not every city wants the show: Austin and New Orleans have both rejected it. And even if a city wants the show, there are lots of layers of approval and bureaucracy to move through. For example, shutting down a city street for 10 days has to have approval from Homeland Security, she said. Busses might have to be rerouted, like they were in San Antonio.

Stabile told me that sometimes a city pays to have the show visit, and sometimes the show pays. “It’s a combination. I’ve never paid exorbitant fees for it,” she said. “Some cities ask for a donation. I always cover municipality fees—security, police” that the show needs.

The production decides whether or not to return to a city based on several factors, including fan/audience turnout, media coverage, space, and parking. She cited Kansas City and St. Louis’ particular strong fanbase.

“This was my easiest location because it’s privately held,” she said, referring to the Daytona International Speedway—which also has tons of parking, which is also useful and something most city downtowns just don’t have.

Who builds the courses?

Development of obstacles starts before Thanksgiving.

The obstacle course has 10 obstacles total and four are the “staples” that don’t change from city to city, though they might change from year to year. Those four are the steps, the warped wall, the salmon ladder, and the final climb.

“They do follow a pattern,” Stabile told me, and always include the same basic order for skills such as agility and balance.

A company called ATS Filmworks constructs the obstacles and tests them.

The Team Ninja Warrior course, by the way, is wider but shorter than the normal course.

What about the Las Vegas course?

The Las Vegas course is not a permanent structure. Like so many sets in film and television production, it’s constructed only when needed, which in this case is June.

The courses used for the Vegas finals are up for exactly 30 days: starting on day one, when pools are dug in the sand, and ending on day 30, when the last evidence of the production leaves.

The Las Vegas course needs four times as many trusses as the regular course.

How is the show filmed?

There are 27 cameras cover the course, including two cameras on cranes; GoPro, point-of-view cameras; and the camera rig that flies along a wire overhead.

Hand-held cameras and a stedicam on a cart follow the contestant down the course, meaning the crew is running up back and forth all night for two nights in a row.

What happens between runs? How long does it take?

A lot happens, and it happens so fast it’s incredible.

One contestant splashed into the water at 9:54, and at 9:57 the next contestant started running—meaning that person ran the course, fell, climbed out, and then the course was cleared, dried, and reset in less than four minutes.

Resetting the course depends upon what obstacles were used, of course, but often involved crew members climbing up the course’s tresses (to replace the salmon ladder), manipulating cables, or walking on top of the course.

At American Ninja Warrior, teams of people spring into action when it’s time: the camera operators running down the course, or capturing shots of the audience; the team with squeegees and towels; or the audience wranglers. They all play a role in making the show come to life.