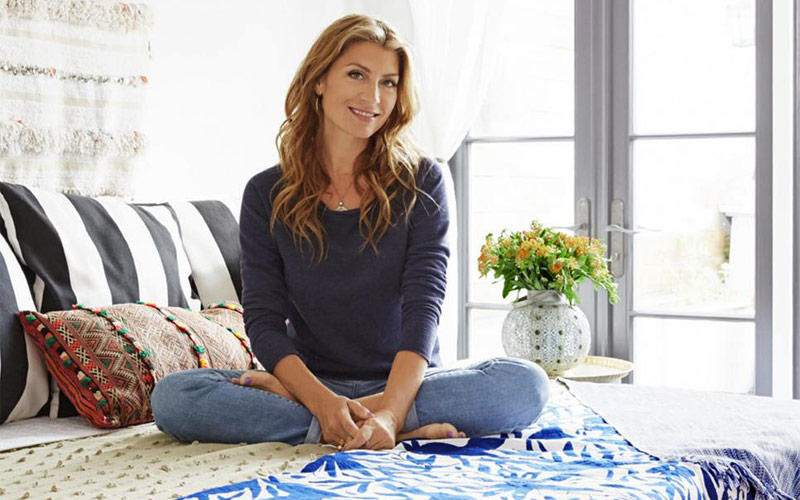 HGTV's Genevieve Gorder, who may be returning to Trading Spaces. (Photo by David A. Land/HGTV)

The original Trading Spaces designers will reunite in a televised reunion, and may be in conversations to return to the show, which is returning to TLC next year. That’s according to Genevieve Gorder, one of the original designers.

Host Paige Davis will return to host, TLC announced today, but what about the designers? There were many of them, ultimately, but I’m thinking of that original, core group of Frank Bielec, Genevieve Gorder, Laurie Hickson-Smith, Hildi Santo-Tomas, Doug Wilson, and Vern Yip?

Some or all of them may be returning to the show.

Genevieve Gorder was a guest on episode 45 of Reality Life with Kate Casey, and said, “We’re having a reunion sometime soon, which I will wait for TLC to announce. It’s about time, right?” She did not specify who is returning, but in her discussions of the cast, referred to the designers and carpenters.

As to their return to Trading Spaces itself, earlier in the podcast, just after the 33-minute mark, Genevieve said, “You know the show’s coming back, right? Well, it’s coming.” There’s crosstalk—host Kate Casey is saying things and moving on to ask about Genevieve’s moss wall—but Genevieve appears to say, “We’ve all been in talks already.”

I listened to it several times and it seems clear to me that’s what she said.

Genevieve does mention she has several television projects coming, including things she’s filming this fall. She says “three or four” that are in the works, and one that hasn’t been announced yet but is “an on-demand channel and I’m going to do an incredibly beautiful design show.”

Trading Spaces designers were a family of six

Earlier, she refers to the group of six as a family who was figuring out how to be television designers together, since they were the first in the space.

“We had no mentors,” she said. “Bob Villa was not really in the same game that we were in. So it was the six of us. We were this crazy family of people that just stuck really close together because life got so wild.”

Also in the episode, Genevieve talks about what the show was like back in 2000—which she reminds us was “before we even had GPS”, “there was no Pinterest. … I was drawing my plans.” She added, “This was before social media, too.”