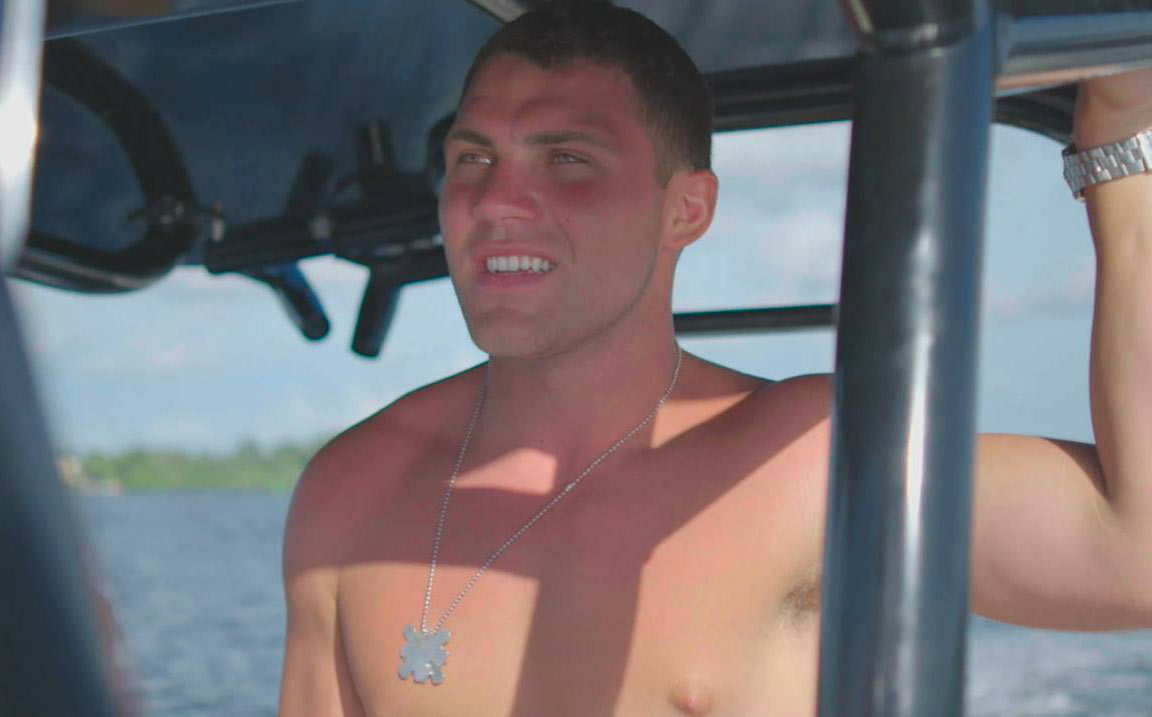 A party planned for the launch of Siesta Key tonight in Sarasota, Fla., was cancelled in part because of death threats toward the show’s star, Alex Kompothecras, who was linked to a man who dragged a live shark behind a boat, and whose Instagram account hosts images of him with animals he’s hunted and killed.

Dr. Gary Kompothecras, the father of Siesta Key star Alex Kompothecras, and the person who paid for the pilot to be filmed, confirmed the death threats but told the Tampa Bay Times, “I wouldn’t say that’s the only reason. There are other reasons” for the cancellation.

The shark-dragging incident came to light last week, when video was posted to social media. In it, one man says, “it’s already almost dead.” The Florida Fish and Wildlife Conservation Commission is investigating, saying in a statement:

“The Division of Law Enforcement has now identified the individuals in the video, and are currently conducting an investigation into this incident. Since the investigation is active, we can’t confirm the identities of the individuals, and it is too early to speculate as to what, if any, violations took place in this incident. However, we would like to state that the lack of respect shown in this video for our precious natural resources is disheartening and disturbing, and is not representative of conservation-minded anglers around the world.”

However, one of those people was identified, including by the novelist Carl Hiaasen, who wrote in the Miami Herald:

“The boat driver is Michael Wenzel, who has an ugly history of harassing wildlife and posting the images on Instagram. One photo features the Manatee County man and some pals roughing up a white pelican. (Wildlife agents investigated, but didn’t charge anyone).

In another published picture, Wenzel is holding what he claims is a dead dog that he intends to use for shark bait.

Still another photo shows him illegally hoisting a tarpon with his fist through its gills, with the mocking caption, ‘#FWCsMostWanted.'”

Wenzel, it turns out, is friends with Alex Kompothecras, star of Siesta Key, though he is not accused of animal abuse himself.

The chair of Save the Tarpon, Tom McLaughlin, “said the group’s investigation has turned up several photos of Wenzel on Alex Kompothecras’ boat. The reality TV star never turned up in the photos and videos of the particularly egregious stuff,” according to the Tampa Bay Times.

A Facebook group, Boycott Siesta Key, which was created by “3 women who want to be the voices for the animals,” said they had nothing to do with threats, and added in a post this morning:

“…our purpose is not to encourage any sort of violence or harassment whatsoever. We can have a much greater impact by pulling together and continuing to reach far and wide to share factual evidence of violations, cruelty and abuse. […] Finally, we remain firm on our stance against violence and therefore we have continued to refrain from taking part in any protests taking place. We support our followers who choose to participate in protests, however we will not be organizing, creating, or attending any such events as an organization.”

The group has, however, posted other images from Alex’s Instagram, such as one with a dead hammerhead shark and this, as his Instagram has quite a few images of him with animals he’s killed, such as a dead deer and what appears to be an alligator.