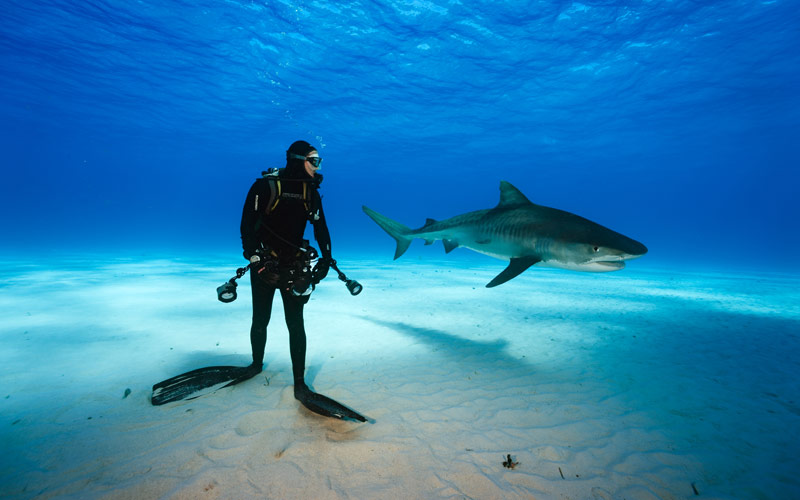 A diver and a tiger shark (Galeocerdo cuvier) near Tiger Beach in the Bahamas. (Photo by Brian Skerry/NatGeo WILD)

If you like watching sharks on television, it’s your week starting on Sunday. That’s because it will not only Shark Week on the Discovery Channel, it’s also Shark Fest on NatGeo WILD.

Yes, there are two weeks of sharks with programs that air at the exact same time.

Its the fifth incarnation of Shark Fest, and it continues to play with the confusion between the two, which in the past it’s openly acknowledged helps its ratings. Last year, its announcement said “we’re proud to be No. 2,” and added a dig at Discovery’s previously lie-filled Shark Week: “Nat Geo WILD’s fourth annual SharkFest continues to stick to the facts.”

NatGeo WILD called attention to its 2017 Shark Fest with the best press release of the year so far: It’s literally Discovery’s press release, edited and illustrated. And the network is bragging that “we may not have [Michael] Phelps racing a shark, but we DO have 2nd best Olympic swimmer Ryan Lochte helping us spread the word about the 2nd best week of sharks.”

Discovery’s publicity game is also very strong, and teaser ads continue the seal theme from the past few years—though with a fun twist and a song from the 1990s I can now not get out of my head.

Watch that below, followed by the schedules for each week’s programming.

Here’s Discovery’s programming for its 2017 Shark Week, from their press release:

Every two years in October – in 2008, 2010, 2012 and 2014 – a secluded beach on the central California coast has been the scene of great white shark attacks. Is it the same shark returning again and again? And will the attacks continue in October 2016?  Dr. Michael Domeier believes the Surf Beach attacks may be more than a tragic coincidence. With the help of shark experts Ralph Collier and Cal Lutheran, and using satellite tags and DNA technology, he wants to out the killer once and for all. Produced by Shark Entertainment.

They are one of the fastest and most efficient predators on the planet: Sharks. He is our greatest champion to ever get in the water: Michael Phelps. 39 world records. 23 Olympic golds. But he has one competition left to win. An event so monumental no one has ever attempted it before. The world’s most decorated athlete takes on the ocean’s most efficient predator: Phelps V Shark – the race is on! Produced by Peacock Productions.

Dr. Mark Meekan and conservationist Paul de Gelder go on an expedition to one the sharkiest places in the world – a remote wilderness called the Cobourg Peninsula in the Northern Territory of Australia. Meekan is there to count sharks and species as part of Vulcan’s Global FinPrint project – Paul de Gelder’s going because he heard that sharks and crocs fight over sea turtles out there. What happens when 14-foot crocodiles move into shark infested waters? That’s what they’re going to find out! Produced by Big Wave.

Early November, giant hammerheads arrive off Bimini, in the Bahamas. But why? Leading shark scientist Tristan Guttridge tags and follows these normally solitary sharks to find out. Many appear to be pregnant females, as an ultrasound of a female hammerhead shows. Guttridge believes they spend winter in Bimini to feed the growing young in their bellies – and then move on to the Florida coast to prey on migrating blacktips – and the evidence is unmistakable. Produced by Icon Films.

Each summer the Gulf Stream pushes north into the waters of southern New England, bringing with it 30 species of shark. Greg Skomal and Joe Romeiro study the annual spectacle, focusing on three sharks – makos, great whites, and porbeagles – that can out-swim, out-think, and out-compete all the others. Produced by 333 Productions and Radley Studios.

RETURN TO THE ISLE OF JAWS – Airing Monday, July 24 at 9PM ET/PT

Divers and scientists RETURN TO THE ISLE OF JAWS to unlock the mysteries of this new great white hot spot, just south of Western Australia. They make a startling discovery that causes us to re-think of everything we thought we knew about great whites. Produced by Red Rock Films.

ALIEN SHARKS is back in search of some of the world’s strangest sharks.  Dr. Craig O’Connell goes to the Bass Strait for sawsharks, while Victoria Elena Vasquez and Dr. David Ebert go into deep water in Tokyo Bay to find the star of the show, the goblin shark. They find both sawsharks and goblins – and many more, including ghost sharks, frilled sharks, and the amazing luminescent lantern shark. Produced by Discovery Studios.

Along the coastline of LA, great white sharks are increasing and they seem to be hunting out of season. Dr. Chris Lowe, Director of the CSULB Shark Lab, wants to know why. His investigation takes him to Guadalupe Island, off Mexico, where he finds the answer. Produced by Arrow Media.

For decades, great white shark numbers were in decline in the waters around New York. But now, seals are back in New York Harbor – can the great whites be far behind? Marine biologist Craig O’Connell tries to find out how close they really are, and shows what a future with great whites in New York will look like. Produced by Pangolin Pictures.

A team of explorers float in a one-of-a-kind shark cage, 500 miles into the Gulf of Mexico. Acting as human lures in the open ocean will they encounter its deadliest shark? Produced by Gurney Entertainment.

From active to extinct, and at every stage in between, volcanoes hold a strong attraction for sharks of all kinds. Across the world, sharks congregate and concentrate around volcanoes and volcanic islands. What is it about volcanoes that make them shark hotspots? Dr. Mike Heithaus dives in several volcanoes to find out. Produced by Pangolin Pictures.

In Brazil, Dr. Hazin has successfully reduced the number of shark encounters by simply catching and moving sharks out to the open sea. What’s his secret? And can this solution work in Australia, where encounters are a problem? Produced by Sealight Pictures.

At various times of the year and in different locations around the world, sharks of many kinds gather, swarm, and spiral. Dr. Tristan Guttridge Ornella Weideli  conduct a study of just what brings them together, and what’s going on in these shark ‘societies’. Produced by Red Rock Films.

Madagascar is NOT known as a location for great white sharks. According to the shark sanctuary here, both great whites and tigers are ‘extinct’ in Madagascan waters. So why has a great white shark, tagged in South Africa, travelled 1500 miles up the African coast to Madagascar? Craig O’Connell and the team make the long journey to the remote island nation to investigate and see if Madagascar is the next big great white shark hotspot. Produced by Arrow Media.

Experts unravel the mystery behind one of the sea’s strangest creatures, the sawfish, from its evolutionary links to sharks and rays, to its key role in the marine ecosystem. Their goal is to bring the sawfish back from the brink of extinction. Produced by Radley Studios and Delve Creative.

A rundown of the greatest moments from SHARK WEEK 2017, featuring the closest calls, biggest bites, greatest gadgets, and viewers’ top picks for the best of SHARK WEEK history. Produced by Discovery Studios.

Michael Phelps joins Doc Gruber and Tristan Guttridge of the Bimini Shark Lab to get a crash course on everything ‘shark.’ They’ll dispel the myths and common misconceptions, teach him how to safely dive with sharks – including how to stay calm when a hammerhead swims two feet above his face – and will get Michael Phelps up close and personal with the incredible power of a great white.  Produced by Peacock Productions.

Here’s what NatGeo WILD will be airing this week, from their press release:


SharkFest kicks off with a look at the animals that dare to take on sharks. Seals, crocodiles, octopi, bobcats and even birds have gone head to head with these elite killers, and we’ve uncovered the footage to prove it. Watch rare moments when a shark ends up on the receiving end of an attack. It’s time for nature’s ultimate underwater showdown.

Every diver has been warned that sharks feed at night, but is this a myth or does the truth lurk somewhere deep beneath the waves? Professional shark diver Eli Martinez and scientist Matthew Smukall plunge into the nighttime world of Tiger Beach to investigate whether shark behavior changes once the sun goes down.

National Geographic underwater photographer and Instagram star Brian Skerry is on a mission to change the perception of our oceans’ greatest predators – sharks. After three decades capturing the world’s oceans on camera, Skerry knows sharks as kings of the oceans that keep these fragile ecosystems functioning, not as violent “Jaws”-like man-eaters.

Across the vast oceans are underwater oases where sharks congregate in huge numbers. What is the attraction at these mysterious waypoints? Join shark scientist Riley Elliott on a unique expedition as he investigates some of the largest and most mysterious shark gatherings on the planet.

The deep blue sea is a majestic place explored by many, but it also holds some of the world’s deadliest apex predators … sharks! These savage killers have one thing in common: the need to feed. In their quest, they use sheer force, technique and genetics to achieve their ultimate goal.