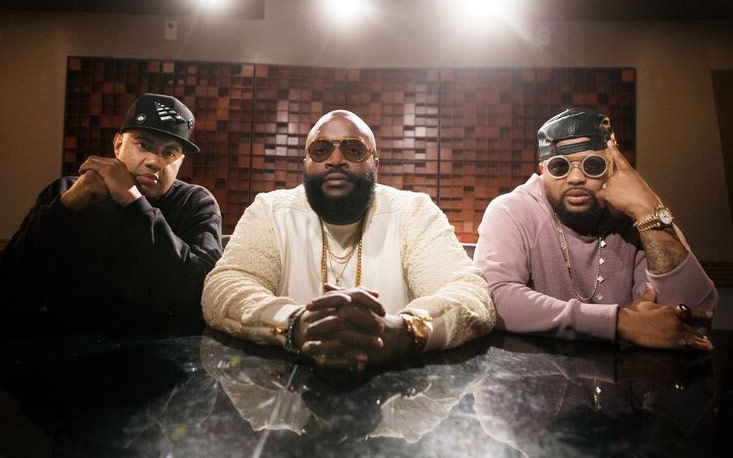 The moguls/judges of Signed: Lenny S, Rick Ross, and The Dream. (Photo by VH1)

The contestant is talented, but his lyrics threw shade someone the show’s three judges—”moguls” is how The-Dream, Rick Ross, and Lenny S are referred to—know and work with, and they send him home immediately for not being smart enough to change that lyric.

As moments like that make clear, signed is most definitely not The Voice or American Idol, it’s a music competition that feels ground in reality, not television.

At the end of the episode, The-Dream makes that point: “This is the fucking music business—like, this isn’t a fucking television show. It’s just on TV.”

The first episode of Signed (VH1, Wednesdays at 8) definitely makes it feel more music business than TV, and it’s a really interesting watch as a result—watching someone going from auditioning to recording in a day or two.

The contestants, who are all unsigned, hip-hop or R&B artists, audition for the moguls in a recording studio, filmed by hand-held cameras that are always in motion and often in close-up or extreme close up. It’s sometimes attractive and sometimes disorienting filmography, with some beautiful, intimate images but also too many lens flares and too much muddiness.

What it isn’t is the standard aesthetic for a music competition; there’s no shiny floor or awkward host. Mark Burnett’s name appears first in the credits, but the showrunner is Jason Sands, who directed season two of Laguna Beach and the first three seasons of The Hills, and was also the showrunner of Chasing Destiny, the BET series on which Kelly Rowland formed a Destiny’s Child-like group. That show was similar, though it felt more conventional, with its numbered contestants. He’s definitely creating something here that feels as intriguing as Laguna Beach once did.

Also, the music is consistently great—these are mostly talented artists, though how their performance and presentation is received by the moguls can vary. The three men are friends and collaborators, so they have immediate chemistry. And while there’s no artificial competition between them, there are creative differences.

Almost immediately, three contestants are given priority and developed, though there’s a different path for each one. The first episode ends in the middle of that stage, so what comes next, and what happens with the remaining contestants, is unclear. The introduction tells us that eventually there will be a live performance in front of an audience, and someone—multiple people?—may get signed to a label.

If it can stay grounded in the music and artists like this, Signed has a lot of potential.