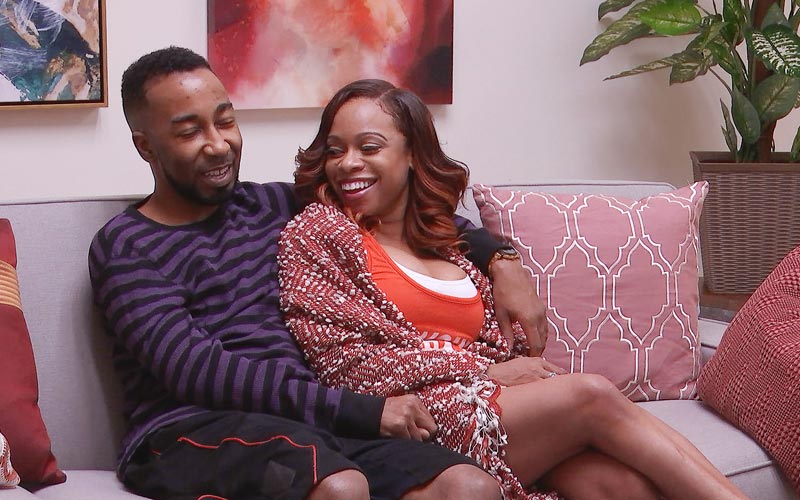 By far my favorite new show of the year so far was NBC’s First Dates, which was not only flawlessly cast, but wonderfully demure, just cameras capturing dinner and conversation between two strangers. Watching all those couples, whether they had instant chemistry or let hangups get in the way of connection, revealed the triumphs and challenges of trying to connect romantically.

Two new shows are similar eavesdropping experiments, though both skip past the first date—one jumps right to marriage, while the other comes after a relationship has ended—and one piles on an unnecessary game element.

I like the concept of A Night with My Ex (Bravo, Tuesdays at 10) much better than the first episode. In each episode, a couple spends a night in a corporate loft apartment in Los Angeles without camera crews or producers. Instead, they’re followed by Big Brother-like robotic cameras.

There is one moment when the camera zooms in a stack of cards, and one says, “Do you still love me?”, so they appear to at least have prompts for their interaction, but mostly it’s just them, talking, or eating and talking, or getting ready for bed and talking.

The show, produced by TwoFour America, is tightly edited, though it has the same kind of a tonal disconnect that other Bravo shows, such as The Real Housewives, do—jaunty music that doesn’t match the intensity of conversations. It’s as if the post-production was trying to splash water on any smoldering fires so as to not upset the audience by making something feel too real.

Alas, the first episode, which airs tonight, features a highly annoying former couple, starting with a highly annoying man who cheated on his ex with “a sexy Tinkerbelle” because she wanted to wait until marriage for sex and he was “sexually frustrated” but now wants to propose marriage to his “best friend” despite not seeing her for years. For real. At best, he’s clumsily trying to re-connect.

The couple’s interaction is full of regret and past experience, and considering how we’re used to seeing conversations with romantic potential, that’s an interesting twist.

Still, this particular couple’s interaction, while sometimes intense, rarely feels authentic. (They often feel like amateur improvisational actors performing a scene.) Perhaps that’s because they know they’re performing for cameras, or perhaps this is just what it’s like to interact with an ex. As she tries to apologize for being sexually unavailable, he berates her for scraping her fork on her plate.

The good part is that there’s a new couple each episode, and half-hour episodes mean that it’s over in just 22 minutes. That’s just enough time to see if something is there.

The Spouse House: get married or get out

Imagine if Bachelor Pad mixed with Married at First Sight and a Big Brother-style game (and dysfunction), and that’s The Spouse House, TLC’s new competition show (TLC, Sundays at 10).

The show starts earnestly, with people who seem like they’re looking for relationships rather than fame, as they’ve agreed to possibly get married to a fellow contestant. All of them are Chicago residents, so they have an actual chance at forming a lasting relationship.

But in the first episode, the cast is ready to get married because, after careful deliberation lasting several seconds, they’ve determined who’s hot. That’s what passes for attraction in The Spouse House.

The show’s format forces superficial interaction over lasting connections, because there’s a game: the contestants have to propose to each other at a weekly ceremony, and no proposal means people go home and will be replaced by new singles. If no one wants to get married, the women vote out a man, and the men vote out a woman—the “least eligible,” in each case. Those votes are open and public, so of course they create drama.

Also creating drama: the cast members are in competition with one another, and thus get in each other’s way of getting married, because there’s a limited pool of people. Their desperation and urgency is not romantic, and after watching 1.5 episodes, I could not see this leading to anything but divorces. Even if someone wants to get married, forcing it is not going to result in success.

The show comes from Kinetic Content, the wizards behind Married at First Sight, but this feels like a wrung-out washcloth of that idea married with Bachelor in Paradise on a TLC budget.

There’s more frankenbiting than romance, and no attempt to help the contestants find an actual partner. (MAFS participants are chosen after a careful matchmaking process, and even that has failed more often than not; the only criteria here seems to be single Chicagoans who want to get married.)

“You’ll leave the same way you entered: single and alone,” one of the two host/experts—who do basically contribute nothing—says at the first eviction. Those who leave are, of course, the real winners of The Spouse House.