Skip to Content
In The Keepers, Jean Hargadon Wehner talks about abuse she suffered at the hands of a priest at her school. (Photo by Netflix)

Both Netflix’s documentary reality series The Keepers and the Serial Productions podcast Shit-Town, or S-Town, have each been this year’s two next-big-true-crime sensations. They are beautifully crafted, haunting works of nonfiction art, each illustrating the best of their respective mediums.

That’s the way both were pitched to audiences, the shorthand that says There’s a murder to solve! You can play along too!

But, spoiler alert, both shows prove themselves to be far more than that. Neither of them forget the dead, and each of them have their own mysteries.

They’re mysteries that unspool like a thread in the middle of the ocean, where there’s so much depth and tumult that the thread kind of drifts off and becomes besides the point. Both The Keepers and S-Town are the stories of survivors—though the two involve very different kinds of traumas, and very different stories of those who’ve endured and survived.

The Keepers opens and is anchored by Gemma Hoskins and Abbie Schaub, two women who are investigating and researching the death of a former teacher, Sister Cathy Cesnik. Gemma and Abbie make for wonderful characters because they’re terrific human beings, devoting more time and dogged attention to a case it seems many others have forgotten.

They’re charming and inspiring amateur sleuths, persistent and effective, whether they’re keeping track of their Freedom of Information Act requests to the FBI, going to government agencies to request records, or mapping out relationships by writing names on coffee filters and spreading them on a kitchen table.

(The rest of this review discusses events from the series.) 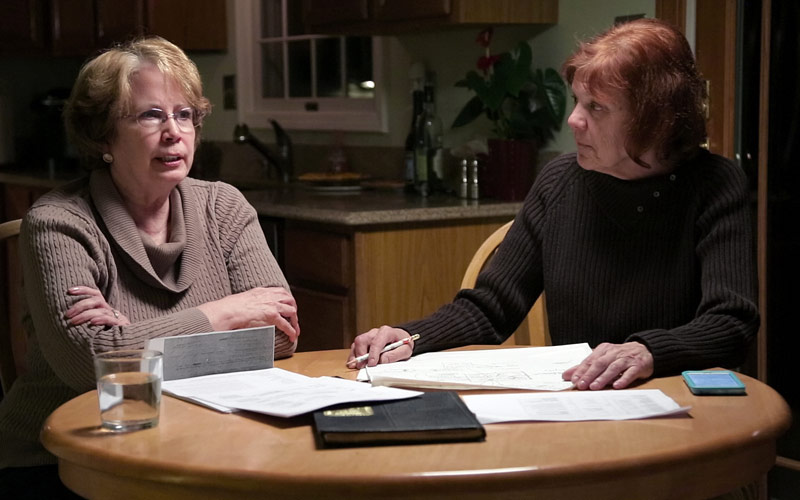 Abbie Schaub and Gemma Hoskins, who investigate the death of their high school teacher, Sister Cathy, in The Keepers. (Image by Netflix)

One major piece of information about Cathy’s death comes from a student who was taken to see Cathy’s body. By a priest. As a threat. Because he’d been systematically raping her and other girls, and also making it possible for other men in the community to rape the girls.

And Cathy, a teacher at the school where the priest was assigned and committed much of his abuse, may have known—hence her unexplained and unsolved murder.

That student is initially known as Jane Doe, a co-plaintiff in a lawsuit who unsuccessfully sued the Archdiocese of Baltimore and Maskell in the 1990s over the abuse. In The Keepers, Jean Wehner identifies herself as Jane Doe, and in its second and third episodes, she tells her story.

Jean’s bravery is not just in her candid discussion of what she was subjected to: sexual assault, rape, and unimaginable abuse of power. It’s also in sharing what she doesn’t know. “They used her death to keep me quiet,” she says in episode two. The death of Sister Cathy “holds memories, and I’ve been afraid of those memories.” Watching some of those memories be validated by independent, external evidence late in the series is one of its more joyous moments.

In Jean and other people survivors of that abuse—including her co-defendent, Teresa Lancaster, aka Jane Roe—The Keepers finds its footing.

Those memories that the women share, but Jean especially, take an abstract concept—abuse by priests—and turn it into knowable people and excruciating, concrete details. Words like “abuse” and “rape” don’t even seem to cover the violations that occurred at Archbishop Keough High School, they’re so atrocious.

“We’re not invisible,” Jean says of herself and her fellow survivors. They are now visible to the world, and to each other. In a darkly comic scene, several women who were victimized laugh lightly about how they might conspire to kill the priest, Joseph Maskell, who did this to them, were he still alive.

The Keepers introduces us to lots of theories and threads, suspects and possibilities, a cascade of details.

Some of those details are maddening. Just watch how Archdiocese representatives argue against legislation that would increase the statute of limitations for child abuse, or listen to the story of a man who reported Maskell’s abuses to his mother in the 1960s, and see if you believe what the Baltimore church says about having no idea at all until the 1990s.

Other details can be overwhelming. “I’m impatient for connections,” Gemma Hoskins says early on, and she might as well be speaking for the audience, especially in episode one, which meanders and could use condensing, as could other scenes throughout the seven episodes.

To his credit, director Ryan White never shifts his focus too far away from the survivors. His craft, while strong, usually doesn’t call attention to itself, though there’s a notable opening sequence, a flurry of black-and-white yearbook photos and crime scene photos, and also recreations that are a bit overused and a try a bit too hard for my taste.

White mostly makes effective yet subtle decisions, like the camera’s focus on Jean’s eyes in a rear-view mirror shortly after we’re reminded that her younger self looked upon the dead nun’s body with those same eyes.

What White has assembled, is a simultaneously horrifying and heartbreaking narrative that thoughtfully explores the pain its subjects have experienced. And he’s captured so many beautiful moments, such as Gemma’s first conversation with Sister Cathy’s living biological sister, Marilyn, which ends with her just putting her head in her arms and sobbing.

The Keepers is about recovered memories and the Catholic Church’s abuses and ongoing re-victimization of those who suffered at the hands of priests who were reassigned or ignored.

It is about how we treat victims, and so often put the blame on them. It’s about what it is like to live with the memory of your dead teacher, your rapist priest, the guilt your relatives carried and allowed to poison their relationships with others.

It’s so much to hold on to, and The Keepers is an excellent vessel to keep those stories—and people—alive.

The word “authentic” is overused in reality television, because what passes for authenticity is so often forced and over-produced.

But the year’s most genuinely authentic, real character is the central character in Shit-Town, aka S-Town, the podcast from This American Life and Serial that debuted in March.

That character is John B. McLemore, an eccentric, intelligent, paranoid resident of a small Alabama community who has strong feelings about a lot of things. After he speaks just a few sentences, you know him and probably love him, since every word drips with character.

Shit-Town begins with John B. contacting This American Life, encouraging them to investigate a murder, but it quickly expands far beyond that.

(The rest of this review discusses events of the podcast.)

Shit-Town is about a life, and that life belongs to John B. After he kills himself, the focus is on what he’s left behind: people. Those people have questions, such as what he may have done with his fortune, but that’s secondary to the ripples and waves his death creates to those closest to him.

Producer and host Brian Reed is one of those people, and becomes a character in his own story when, at the end of episode two, he gets a phone call from a family close to John and learns of John’s death. His trips to Woodstock, Alabama, has connected Brian not just to John, but to John’s employee/friend Tyler Goodson and his family, and others. In that phone call, Brian, Tyler, his wife Skyler, and others process the lost of this man who was a presence in their lives.

And that’s just the beginning. What happens to John’s mother, Mary Grace, and her closest living relatives provides some suspense and intrigue, and it all ties back to the ramifications of his death. And just when you think someone is a hero or villain, Reed rounds out a one-dimensional character and shows us how complicated people are.

Shit-Town has gotten some shit for what some listeners perceive to be ethical breaches, especially discussion of John’s sexuality and relationships with men, and for speculating about the cause of his death. But I found both of those to be handled responsibly. As to what might have contributed to his death, mercury poisoning, the narrative is upfront and clear about its speculation and the impossibility of knowing.

His sexuality, though, leads to what for me was one of the show’s best interviews: an extended conversation with a man who’d had a relationship with John. With Brian, he’s processing that relationship—and the loss of his friend, and the ambiguity of it all, from sexuality to human connection.

Reed convinced me in the podcast that none of the material he includes would have been objectionable to John B., who clearly wanted an audience for his life, his conspiracy theories, his concerns and worries, and his genius. Shit-Town the podcast is a beautiful tribute to him and his life; that John isn’t around to hear it is just one of its tragedies.