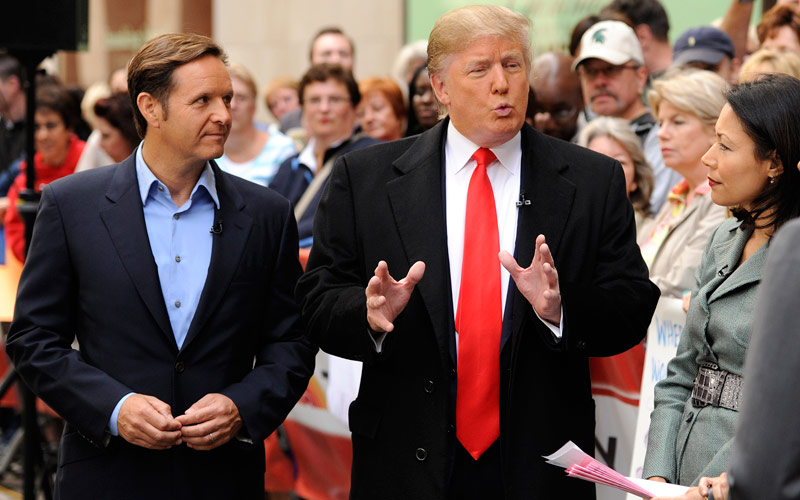 Mark Burnett and Donald Trump talk to Ann Curry on The Today Show in Sept. 2010. (Photo by Peter Kramer/NBC)

The New Celebrity Apprentice executive producer Mark Burnett has blamed people and politics for its low ratings earlier this year, instead of taking responsibility for the fact that the season was objectively terrible. He also says the show will likely return.

“It came on at a time in our country when there’s a big divide. That didn’t help the show. Many people couldn’t look at it purely on the merits of the fun of the show. That certainly didn’t help.”

Mmm, no. If anything, it was the perfect time for us to come together over the ridiculous antics of celebrities attempting business-oriented tasks.

That’s such an insulting deflection of responsibility—especially when Burnett himself is responsible for remaking Trump’s image via The Apprentice. Blame the audience! Blame politics!

Yes, there was high anxiety, animosity, and tension over politics in the United States at the start of this year, and we still may disagree about a lot, but that did not affect our collective love of shows from Survivor to America’s Got Talent to Big Brother.

Yes, the fact that the President of the United States would profit from a television show made news, because it was news. (It’s so important that two states are now suing Donald Trump over money he earned from the show.)

But the real problem was that the show was not good. Period.

Schwarzenegger was not good. The tasks were boring, especially in the two-hour premiere, which was too long. The show attempted to just swap out Schwarzenegger for Trump, and an office set on a soundstage for a boardroom set in Trump Tower, and expect everything would be fine.

It wasn’t; it was a flat version of its former self. Worse, it retained the original show’s sexism, such as Schwarzenegger repeatedly telling women to stop talking.

The season wasn’t all bad: It had a terrific winner, Matt Iseman, and…well, that’s all I can recall.

The Apprentice will be back

Burnett said that, because of the strength of the format, he expects it’ll return soon:

“The Apprentice is a great format. Formats are hard to come by. It continues to be one of the top shows in the U.K. I believe we’ll carry on (in the U.S.) for many years to come. I’m sure sometime in the next year we’ll look at it again and figure out what we do now.”

While Donald Trump remains an owner of that format, Burnett has not talked to him:

“I’m sure he’s got more things on his mind. We’ve had zero discussion about what to do with The Apprentice.”

Variety reports that a future season might not have celebrity contestants, and could also have a female host. Those would be welcome changes. But the show needs to do more to evolve than that.