Skip to Content
Amaryliss Fox, a former CIA officer, investigates H. H. Holmes to see if there's a connection between him and Jack the Ripper. (Photo by Magilla Entertainment/History)

The theory explored in History’s new series American Ripper, that Chicago’s “murder castle” serial killer H. H. Holmes was also Jack the Ripper, is compelling: Could Holmes, who swindled and then murdered people in a custom-built Chicago hotel, have secretly snuck off and killed five people in London?

That theory also isn’t new, which may contribute to the feeling that there’s less discovery, more didacticism in the first episode of American Ripper (History, Tuesdays at 10).

After all, Jeff Mudgett, the great-great grandson of Holmes and one of the subjects of American Ripper, wrote a 2011 book about Holmes. Holmes himself wrote about his Chicago murders—though he didn’t confess to the London murders, and nothing has been proven definitively yet.

The first of eight episodes does its job of introducing and telling the story, as Mudgett is paired up with a professional investigator who’s also a former CIA officer and professional speaker, Amaryliss Fox, and they visit locations and interact with professionals who keep historical records.

Very little feels like discovery, though. Instead, it’s a lot of narration.

In the first episode alone, I counted three narrators: Mudgett, Fox, and a more traditional third, faceless narrator. But why have someone do voiceover when you’re already having your cast fill that same role by reciting what seem to be scripted lines? That exposition is fine, and I’d actually prefer to hear the story from the people involved. (The series is produced by Magilla Entertainment, the company behind Long Island Medium and Moonshiners, which I never would have guessed.) 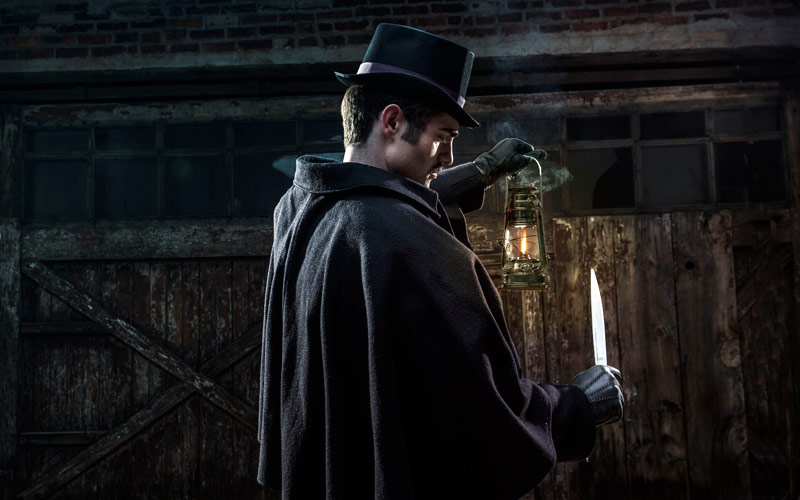 An actor portrayal during a reenactment on History’s American Ripper. (Photo by Eric Ogden/History)

I was so much more engaged in the this-season-on trailer at the end of the episode, which contains a flurry of moments of questions and discovery, of literal and metaphoric digging.

Based on that footage, I’m ready for episode two, though I fear that the trailer isolates the authentic moments in one package.

American Ripper’s visuals are striking, though it is perhaps more striking that the aerial drone shots—of Chicago’s loop, or an open grave—are more visually interesting than the barely lit reenactments, of which there are many. Though there’s a lot of it, that footage also is repeated.

Less is usually more with reenactments kinds of things, and I’d rather have imagined what a young Holmes looked like apprenticing under someone who was conducting an autopsy, rather than watching a young actor move a large bloody piece of something from a bloody hole in a faux corpse.

There’s more horror in imagination, and more thrill in discovery, and American Ripper doesn’t yet have enough of either.