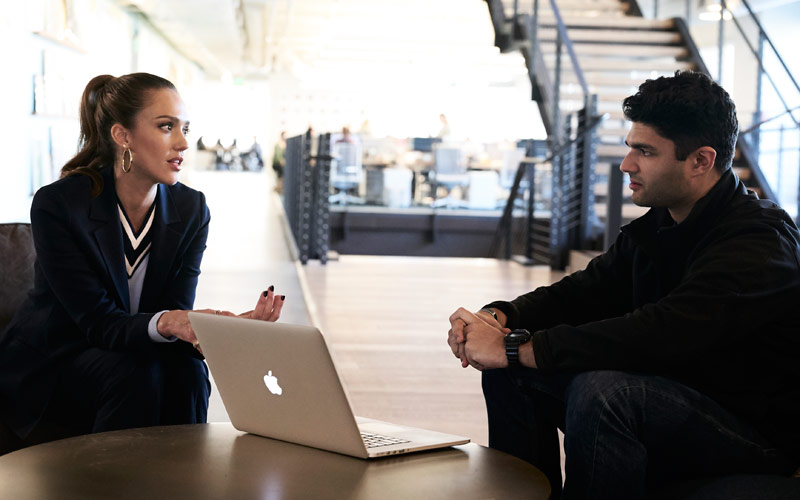 Celebrities sitting in the dark, swiping left or right, yes or no, on iPads. Shots of the camera operators, and the sound of the director. An escalator. Celebrities staring into space.

Planet of the Apps, Apple Music’s first TV show and first reality show, is full of these kinds of gimmicks, like the constant sound of a soundstage bell that signals filming is starting—except filming is already occurring, since we’re hearing the bell and seeing the reaction of the crew and the contestants.

Those seem to distract from the fact that there’s not much here; despite being an actual 60 minutes, the premiere episode—which debuted on Apple Music earlier this month, and which you can watch for free—is surprisingly flat. It’s a decent show but there’s also a reason it took me weeks to bother to write about it; it doesn’t feel urgent or super-interesting in any way.

In each self-contained episode, which are released weekly, app creators get on a fake escalator and pitch four celebrity panelists, who then swipe to say yes or no. If at least one says yes, they get to pitch more. They then choose one of the panelists—Gwyneth Paltrow, Jessica Alba, will.i.am, and Gary Vaynerchuk—who’s said yes.

They’re actually not investors themselves, but mentors. And it’s not clear why they’re qualified to mentor tech companies. They do a decent job of asking questions, though in episode one will.i.am is barely there and Gary Vaynerchuk is overbearing. And yet we still hear very little from them, and learn only tiny bits about the contestants.

After the gimmicks and faux-fourth-wall distractions are cleared aside, there’s a well-shot, smoothly edited show, but not one that’s interested in going deep on anything, including its own reason for existing.

Planet of the Apps is produced by long-time executives Ben Silverman and Howard T. Owens’ new-ish company Propagate, and also, I was surprised to see, Mission Control Media, which produces Face Off and Hollywood Game Night. I was surprised because this show has none of the life or heart of those fun competitions.

Not quite Shark Tank, but better than the other knock-offs

“Is anyone else doing this?” Jessica Alba asks the first contestant. Yes: Shark Tank does it much better, and knock-offs like Mark Burnett’s weak TBS competition America’s Greatest Makers have botched similar formats.

Planet of the Apps isn’t bad, it’s just not House of Cards—it’s not something I’d subscribe to Apple Music to watch. There isn’t any overt selling of the apps to viewers, though I did look up two of the apps in Apple’s App Store, though there I discovered that one hasn’t been updated since last fall and has reviews that say no longer works. So the show definitely isn’t an infomercial, or it’s just the worst one ever.

After the dry first half, when a host interviews the contestants and they do their escalator pitch (the set design may be this show’s greatest achievement), the show leaves the studio. It’s moderately more interesting as it follows the app creators as they have a series of meetings with their mentors.

What is all this for? What are the mentors there to do, exactly? Jessica Alba meets with her founder but doesn’t talk to him about his actual pitch to venture capitalists until two hours before the actual pitch, though she does find a use for his app at her company. Gary Vaynerchuk orders his founders around, but doesn’t seem to have any actual power or relationship over them—though ultimately he does make a decent suggestion, the one hint of the potential of this relationship.

POTA doesn’t feel as forced and staged as Beyond the Tank, but can’t quite shake the feeling that these meetings are happening just for the sake of the show, from the initial pitch to the mentor meetings to the final pitch to actual VCs. Even when one app gets a $1,000,000 offer, the show tells us so little about it that I was left with questions I learned from watching Shark Tank: What’s the valuation? What percentage are the giving up? What are the terms? There are no answers, just the next episode.

All of this means that, for me, Planet of the Apps seems destined to a fate similar to so many downloaded apps: destined to sit there looking nice while not doing very much at all.