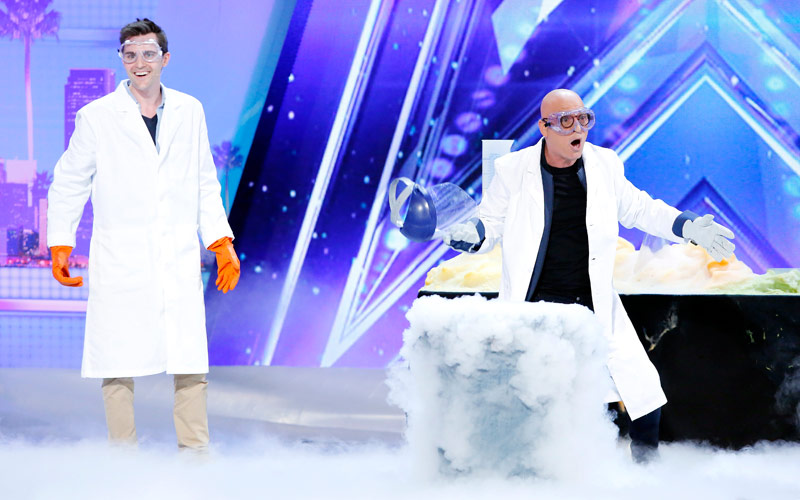 Big Brother 15's Nick Uhas with Howie Mandel at the conclusion of his America's Got Talent audition. (Photo by Trae Patton/NBC)

America’s Got Talent is back, and I’m gladly giving myself over to its two hours every week. The show is just fun, period. New host Tyra Banks fits well with the panel, and as a bonus, she is not attempting to imitate every single contestant from her stage left hangout, as her predecessor did.

Season 12 has delivered a lot of over-the-top spectacle: impressive talent, ridiculous moments, and lots of tears.

Yes, there have already been tears. This audition from the premiere in particular wrecked my household—both because of 12-year-old Darci Lynne’s talent, but mostly because of her reaction to the reaction she got:

A BB15 houseguest, now wowing the judges on NBC

On the second audition episode, which aired last night, a houseguest from Big Brother 15—which,  yes, was that season—auditioned in front of Heidi Klum, Mel B, Simon Cowell, and Howie Mandel.

Following a montage of contestants who got lots of Xs, Nick Uhas got a brief introduction, interacting with Tyra near the line of auditioners. “I’m a science teacher for the masses,” he said. “I ended up going to college for science, and became a published chemist, and I loved it.”

He never acknowledged his previous reality TV experience, which was probably a good idea.

“I am 32 years old and I make science videos for the Internet,” he told the judges. (He does.) When Simon Cowell skeptically asked if Nick thought his act could win $1 million, Nick said, “Oh yeah. Science is that cool.”

AGT sometimes cuts away to audience members’ commenting, and Nick got some shade from one of them: “That’s a little hard to believe, but okay.”

He started his act with a perfect comic bit: having the judges breathe in gas and talk deeply, the opposite of the high-pitched sound that comes from breathing helium. It went over so well Heidi Klum just tweeted a video of it.

Then he had Mel B and Howie help with creating two large-scale chemical reactions that were perfect for the AGT stage. Watch:

There wasn’t much, you know, science talk; Nick is no Bill Nye or Mr. Wizard. He didn’t even identify the gas in the balloons, calling it “a gas that is very different than helium,” and he didn’t explain what happened in the second reaction.

But they were undeniably cool to watch, and he got four yes votes from the judges, who gave him feedback after sucking in more gas and talking with their ridiculously deep voices. I think it’s safe to say he’s already a frontrunner. At least, his act has much more potential for evolving and being consistently entertaining than the very first act the judges put through, which was a reluctant but ultimately piano-playing chicken.