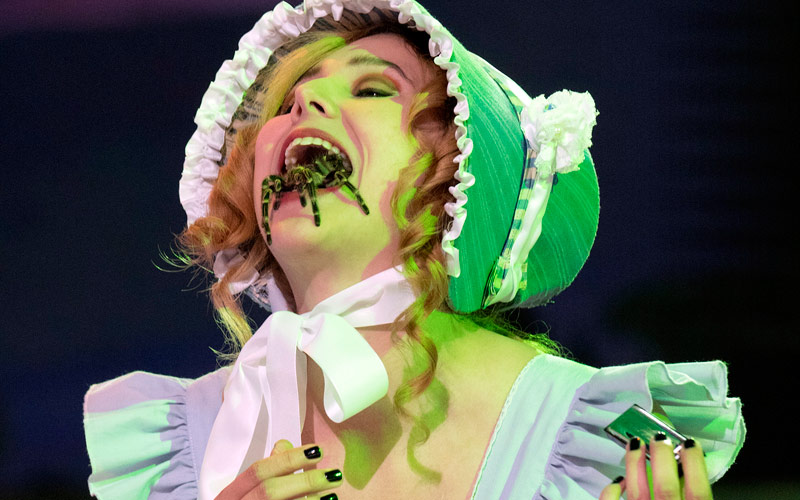 Mary Bleeds performs with a tarantula during The Gong Show's premiere. (Photo by Greg Gayne/ABC)

ABC premiered two new reality shows last night, and I have thoughts about each one.

Someone tell Boy Band it’s the boring one

Boy Band captured my interest because the original Making the Band still holds a special place in my reality TV heart, and not just because it was the first broadcast reality show, debuting well before Survivor did in 2000. I knew Boy Band wouldn’t be the same show—this is a singing competition, not a documentary-style series about the formation of a new boy band—but I didn’t realize how bad it could be.

Some of the guys were talented performers. And that was everything good about Boy Band.

Okay, yes, the show did improve over its two hours. But that was a half hour of mildly interesting content after 90 minutes of an exercise in futility, an okay let’s do this even though none of us really want to. Even the set, which resembled a massive garage door surrounded by an oddly balanced assortment of fake warehouse windows, looked like it didn’t even want to try.

The lack of a studio audience for the early auditions was an interesting choice, and I certainly am tired of the audience cheering that’s sweetened in post-production to make it sound like the entire audience is screaming and cheering non-stop. But it just helped highlight how little energy there was in the room.

The judges—excuse me, “architects” (and excuse me, retch)—were boring, too. Timbaland got up and performed with one contestant, which was a bit of fun in.

But I can’t blame them. I’d be bored, too. Few of them were both strong performers and singers, and there was a lot of pitchiness, dawg. That first hour dragged.

In the second hour, the judges combined the contestants, and that was a lot more interesting. I didn’t quite get Nick Carter as a judge until he started teaching a group of contestants a brief dance to “Everybody (Backstreet’s Back).” And then I didn’t get him again when he commented “fuego” on a verse sung in Spanish.

I want more training, which came after the formation of the top 18, including Tabitha and Napoleon showing up to teach them choreography. In other words, I wanted more Making the Band and less of everything we’ve already seem over and over again.

After 90 minutes of a cardboard version of a singing competition and a bit of  training, the outcome was a performance that felt like it was discovered on a VHS tape from the 1990s.

The Gong Show was exactly what it needed to be: an hour of absurdity. At first I wasn’t quite sure if there was a need for this show, when there are ridiculous and bad acts that show up as comic relief on other competitions, such as America’s Got Talent.

It was gross and juvenile and absolutely fantastic.

So was the woman dressed as Little Bo Peep who played the harmonica with a giant taratula in her mouth. And the sasquatch riding a unicycle playing a fire-breathing bagpipe. An operatic singer wooing Will Arnett.

The show is 100 percent about those so-bad-they’re-amazing performances. It doesn’t bother with bio packages or sometimes even with names for its contestants; the judges scores are mostly for comedy.

Mike Myers, in bad makeup to play host Tommy Maitland, was the weak link, though he was not as grating as in his pre-show appearances. As I tweeted during the show: If a show needs someone with dated jokes who’s convinced he’s funny, Mike Myers is a perfect choice. There is something interesting at the core of what he’s doing, but he’s trying too hard by about 50 percent, and it just feels like Austin Powers with puns and desperation.

He does keep the show moving, though, and it burned through a bunch of acts in an hour, and was the opposite of its Thursday night predecessor in every way: light, fun, enjoyable, and fresh, even for a show that’s echoing the 1970s.