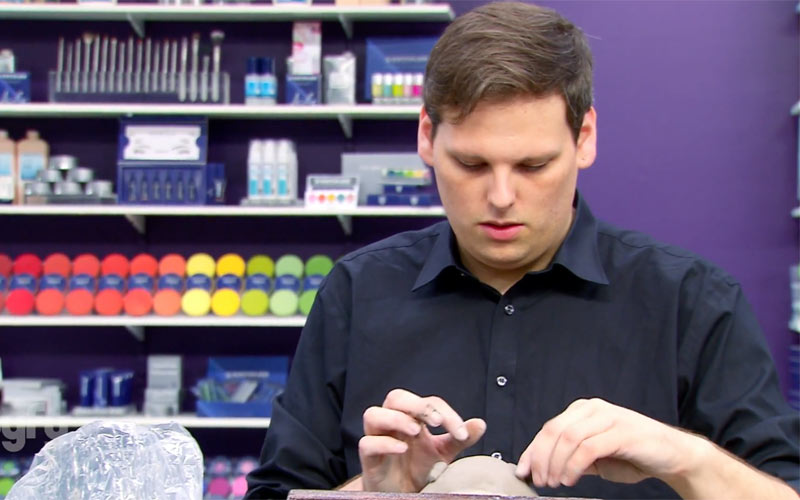 Nick Fischer in the workroom on Face Off: Divide and Conquer.

“I got to make fairies!” Face Off contestant Nick Fischer said in the most exuberant and animated way possible at the start of the Syfy show’s third challenge, which was to create a family of fantasy creatures inspired by an image of a fantastical house.

But that joyous start was not foreshadowing success. By the end of the episode, Nick was eliminated not because of the quality of his own work, but because of his actions in the workroom toward another contestant’s work.

Face Off: Divide and Conquer has, in its first three episodes, mostly just illustrated only the tremendous gap between the ability of its contestants to perform under the constraints of challenges, and the work done during Face Off: All Stars.

Of course the all-star contestants would be better: they each had practice in this environment, and were working in pairs that made them even stronger. Still, even though the contestants are working in two big groups, the quality is way down this season, and it’s noticeable—perhaps because of the team versus team structure, which gives on person more power over the division of labor.

What was most notable about last night’s episode was that there was conflict between contestants, and then an elimination that essentially punished Nick’s behavior as the person in charge of his team.

The always-stilted eliminations ended with Glenn Hetrick admonishing the eliminated contestant, Nick Fischer, by saying, “Being foreman is not a pass to do whatever you want, especially when it involves other people’s work.”

Nick said, “I completely understand. It wasn’t right of me to stifle her creativity—she’s very talented.”

He was talking about Jill, whose clay mold he modified without asking her. He also made other decisions for her, such as the decision to paint the model a ghostly white.

This didn’t turn Face Off into a drunken fight fest; the conflict was always grounded in the work. But it was conflict and it was quite the contrast to the usual everyone-helps-each-other atmosphere in the workroom, and work itself being the reason why someone wins or loses.

It got pretty tense for a moment during judging, which for me is the show’s weakest part because it’s so stiff and formulaic. While Jill’s work was being judged, she said only that “there was some conflict in the shop, and I was trying to do what I was told.” Glenn pressed her on that, and without saying Nick’s name, she said, “the foreman … jumped over to sculpt. He took off what I was working on because of Michael Westmore’s critique.”

Glenn, more agitated than I’ve ever seen him, turned to Nick and asked, “Did you take the sculpture off of the form?” He didn’t like Nick’s answer and said: “It’s a yes or no question.”

Glenn then lectured Nick in what to me seemed like the Face Off version of this legendary reality TV moment:

“That is tantamount to sacrilege in the effects industry. Every single person that works for me, not one of us has ever—ever!—walked through my shop and pulled the clay off of somebody else’s sculpture. Ever.”

Okay, so it wasn’t anywhere close to Tyra. But Glenn and the rest of the panel definitely could use a little more Tyra, should something like this happen again.