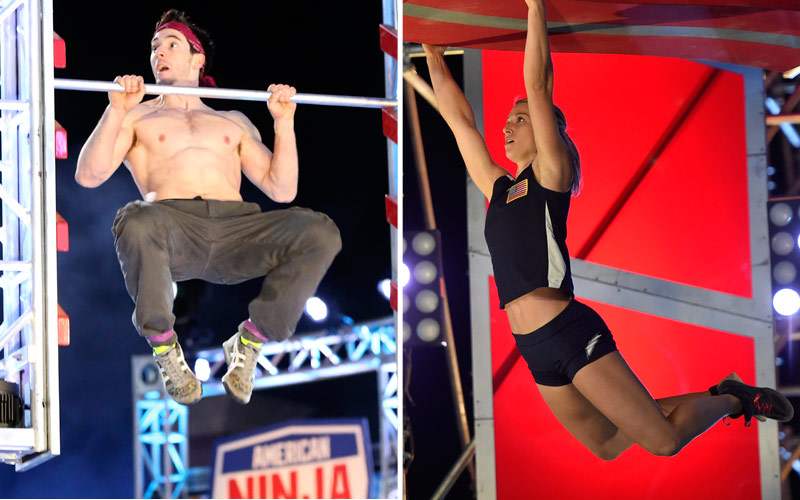 The first person I saw as I walked along the empty, quiet American Ninja Warrior course in Daytona Beach, Fla., was Jessie Graff, flying through the air.

There were no audience members or crew members or contestants; the sun was still up this cool April evening, and contestants wouldn’t start attempting the course for a few more hours. But there she was, holding on to two handles, frozen in space and time.

Jessie was on the side of a tractor-trailer parked near the front of the course—or at least, her picture was, a photo from last season’s finals in Las Vegas blown up and plastered to the side of one of the vehicles used to transport the show’s course around the country.

She was there because she’s become one of the show’s biggest stars, and because the contestants who compete on the show have become—and keep becoming—actual celebrities.

“To see Jessie Graff, who just a few years ago couldn’t make it up the warped wall, and now be the first woman to complete stage one, and now she’s literally on the truck. She’s the biggest Ninja around,” host Matt Iseman told me later.

Graff herself is surprised by what’s happened ever since her roommate applied to the show for her. “I am a truck now,” she told me. “It’s crazy. I thought I was just going play on an obstacle course, and it’s blown up into this huge fitness revolution.”

American Ninja Warrior truly has blown up. Last summer, it was solidly in the top 10 of broadcast primetime TV shows in all demos, and had its most-watched season ever.

And its popularity has made its contestants famous.

Earlier, I’d received a text from a friend who’d traveled 40 miles and rented a hotel room, just to be part of the audience that’d be cycled in after midnight, because her young son loved the show so much. My friend sent a photo of her son with Drew Drechsel, who’d taken time to pose with fans before competing.

It is, though it is also surprising, considering that American Nina Warrior gives its contestants exactly one chance. A contestant is introduced, sometimes with a video, sometimes not, and then tackles the course. They usually fall off an obstacle into the water—most do—and then most disappear for the rest of the season with a splash after maybe a minute or two of airtime, total.

Those who do the best return to compete in the next phase of the competition, but they can also be eliminated after just a few seconds with just one mistake.

So how did that give way to stars on the side of a bus, stars who young kids want to pose with, and who have their own character-trait nicknames, such as from Jesse ‘Flex’ Labreck” to James “The Beast” McGrath?

What happened, completely accidentally and organically, is that an entire culture developed around American Ninja Warrior that ranges from superfans to people who train to become contestants, to the contestants who offer that training.

Matt Iseman told me that Ninja Warrior has “really transcended the show. It’s become a sport.” He added that “the community that exists amongst the Ninjas …  has just been organic,” and so has the celebrity culture.

The key is one element of the television show itself.

“We can’t overstate,” he said, “if it weren’t for the stories, it would be people doing a jungle gym for two hours, and I think the stories we tell resonate with people.” Those stories are the clip packages and details that Iseman and his fellow host Akbar Gbajabiamila share with viewers as contestants tackle the course.

But not even they know everything about contestants. Last year, masked contestant Flip Rodriguez revealed that he’d been sexually abused for six years as a kid, from age 9 to 15. “I cried once I found out,” Akbar told me, “because I didn’t know that—we didn’t know that going into this.” He found out watching the episode.

Iseman said that “whatever obstacle you’ve faced in your life, someone on this course has probably faced it as well, and I think it just gives people the courage to get up and keep fighting.”

People do, and they work hard all year to be ready. Akbar said that one change he’s noticed over his five years hosting is how much “people are training to try it.” Previously, contestants “didn’t have the same level of respect [for the course or sport]—they just thought, This is something I can walk out and do.“

Returning to ANW year after year

The preparation and emotional connection has given way to American Ninja Warrior’s own celebrity competitors who return to compete year after year.

The show actually coordinates auditions from fan-favorite contestants, spreading them out across audition cities so that they’ll be some in every audition episode—in addition to brand-new competitors who may themselves become ANW celebrities, and friends with each other.

“I fell in love with the community, and fell in love with this new game of finding things that look impossible,” Graff told me. “Everyone obviously wants to do their best and be on top, but it’s so much more about beating the course than other people. We want to see other people do their best; we all get better when we help each other. I’ve learned so much from Michelle Warnky about grip strength and climbing, and I’ve been helping her with trampoline stuff. We all have such different backgrounds.”

It was well past dark when I interviewed her, and the bleachers were now full of screaming fans, and contestants had begun running the course, watched by the camera crew that followed along. (Later this month: I’ll report more from behind the scenes of the production.)

Jessie Graff was keeping an eye on contestants as they took on this season’s obstacles. “I’m watching the course as we’re talking,” she said at one point. I didn’t mind, of course, and said that, so she went over and crouched by the start line and watched a contestant for the better part of a minute.

I later asked what she was watching for, and Jessie said she was both rooting for the contestant and trying to learn the best technique for individual obstacles, analyzing how they worked.

She told me that now, tackling the course is “scarier every time. The first time I just didn’t know what it was. I didn’t know that anyone cared; I was just playing.” But now she knows that “the tiniest misstep and it’s all over.”

“People always talk about how relaxed I look on the course, and I’m terrified, of course—but I kind of enjoy being terrified, I think. I enjoy that pressure and testing myself,” she said, comparing the pressure to the fight or flight response from being chased by a bear. “How will you react under that much pressure? Is it going to overwhelm you and throw you off so you trip on things more easily, or are you going to be able to focus it and handle the pressure and do things better than you thought you could?”

“It’s a really cool experience that you get to try that,” she said, “and see how you do, and the consequences of failing are you’re wet and embarrassed, versus eaten by a bear.”

Drew Drechsel made a career out of ANW

It can also be lucrative, or at least a job.

Drew Drechsel’s bio calls him “a professional Ninja Warrior” and he told me, “It’s my lifestyle. This is what I do.”

He’s competed seven times on ANW and five times on the Japanese version, in addition to other kinds of competitions. He also trains people at his two gyms in Connecticut, Real Life Ninja Academy and New Era Ninjas, and recently announced that he’s looking to expand his business.

“Whether they think they can do it or they don’t think they can do it, everyone wants to try it,” Drechsel told me. He said that a “kid who wants to try it, they’re either going to go in their back yard or a playground, and they’re going to try doing it on their own in an uncontrolled and typically unsafe environment. I started opening gyms so that kids have a controlled environment to practice and play on, stay safe, and get proper coaching.”

Drew added that, “by the time they leave, they’re doing the salmon ladder, the cliffhanger, they’ve conquered the warped wall and the steps and rope swing.”

Training others to tackle the course, or at least versions of it, carries its own kind of pressure. “It’s always nerve-wracking,” Drew said about taking on the course. “I’ve built a career on my success at Ninja Warrior, and not to say that if I don’t well, my career won’t continue, but it definitely gets easier to grow and expand the better I do.”

For Graff, American Ninja Warrior is about more than just the time spent on the course itself, which may just be seconds. “If you got stronger over the past year of trying to do well on this course,” Graff told me, “you already won, regardless of where you fall.”