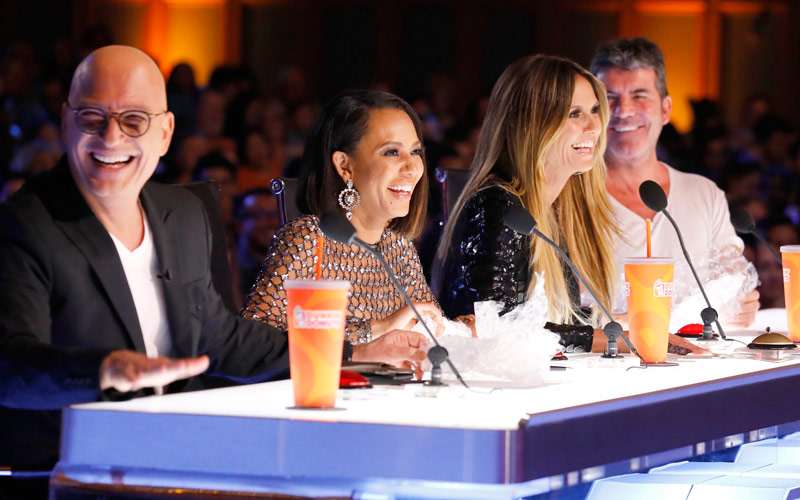 America's Got Talent is one of the best summer reality TV shows. (Photo by Trae Patton/NBC)

When I asked what your favorite summer show is, 28 percent of you said Big Brother—no other show came close, though many expressed a sort of reluctance about that. I read it as the same kind of minor shame I experience when I go watch a super-dumb action movie, such as Transformers: The Last Knight, that I know is stupid and have real problems with but still enjoy nevertheless.

As I’ve been watching TV, and narrowing down my list of my favorite summer shows right now, I realized that they’re mostly competition shows. Though I am watching some non-competitions (RHONY, The Profit), I think competitions make for great summer reality TV because each episode follows a relatively familiar path, and they can contain spectacle or goofiness or both.

So, here’s my list of my top five perfectly summer-y reality shows, plus five runners-up.

America’s Got Talent (NBC, Tuesdays at 8) has grown on me over the past few years. I’m not sure if it’s improved or if I’ve just given myself over to the spectacle, but it’s reality television’s best-produced spectacle.

The montages of judges playing around, the bios of the contestants—it’s all so well-constructed. Even the songs that play after a contestant has been sent through to the next round are well-chosen, and can stir up a lot of emotion.

Both Simon Cowell and Tyra Banks have been excellent additions, and those words surprise me.

Perhaps the show inspires relaxed fun; perhaps it’s such a big machine that it’d transform anyone into the cog it needs. But both are consistently at their absolute best. Tyra has been self-deprecating and relaxed, and very different from her Top Model I WAS ROOTING FOR YOU persona, and from her interviewing persona.

There are a few tiny things to quibble about, such as the preponderance of singers and Simon Cowell’s baffling belief that alleged mind readers or magicians are doing real magic. And it’s a show that works in full or in fast-forward.

2. Battle of the Network Stars, ABC

“Blair and Tootie are down right now!”

Battle of the Network Stars had me before the TV stars even started competing. But it was the commentators referring to the celebrities as their character names (“Here goes Balki!” as Bronson Pinchot started running, or “Blossom’s little brother” during a recap of Joey Lawrence’s run) that solidified it.

Based on last night’s premiere, the show seems like a model of simplicity, and thus is the exact opposite of AGT.

The competitions—10 total, though not all were shown in full—took place on the campus of Pepperdine University, which had practically no set dressing. There was no product placement; no overly produced drama; no complicated challenges. Just easy, simple games, and celebrities playing them.

Emotional, like when Kim Fields said to the camera, “I’ve known Lisa [Whelchel] since I was nine years old.” She paused, choking up. “And she’s still the same wonderful person. She’s been through a lot; I’ve been through a lot; you go through life.”

Yes you do, and being able to watch both of them then—they both competed in the 1970s/1980s version of the show, and the 2017 version gave us several flashbacks to that series—and now is one of the joys that life provides.

Besides Candy Crush (CBS, debuts July 9 with Survivor and Big Brother contestants), this is the show I had the lowest expectation for.

But Beat Shazam (Fox, Thursdays at 8) is terrific, thanks largely to Jamie Foxx, who is a wonderful host. He’s alive to every moment and doesn’t let anything the contestants say or do get past him. His only flaw is not being able to fake surprise at each episode’s celebrity guest, and that just illustrates how genuine he is the rest of the time.

Beat Shazam is a game show that’s very much like Name that Tune, with contestants trying to identify a song the fastest. For most of the show, it’s multiple choice. At the end, when the winning pair is competing for $1 million, they have to name the title exactly, and do it faster than Shazam. (Here’s how that works, by the way.)

By now, either you’re watching The Great British Baking Show (PBS, Fridays at 9, check your local listings) or you’re willfully avoiding it.

There isn’t a more charming, pun-filled way to spend an hour every week. Like Battle of the Network stars, it’s simple and stripped-down. Like America’s Got Talent, it allows us to connect with the contestants and follow their journeys.

This group seemed to struggle a little more in the early rounds, but it’s still bakers versus themselves and their ovens, not versus each other. And the hosts and judges are layers and layers of icing.

“Who’s this?” Paul Hollywood asked about a gingerbread cookie. “That’s Susan, my sister,” the contestant said, and Paul snapped the cookie’s head off. Delicious!

Each season adds new games, but this season expanded with a new faux backyard space that allows for bigger, more physical games (and versions of previous games), and it amps up the action.

Jane Lynch’s scripted and improvised commentary is wonderful, and so are the goofs and mistakes of the celebrities. Like Celebrity Apprentice, it has a way of revealing things we didn’t know about celebrities, like how smart they are, or how quickly pressure gets to them. But they also succeed, and in doing so help a non-celebrity win some money.