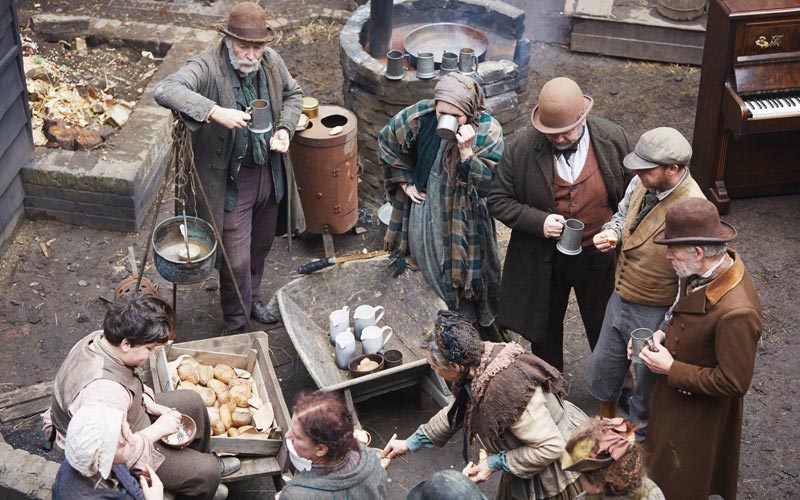 The participants of Victorian Slum House. (Photo by Wall To Wall)

The host, Michael Mosley, is talking to the camera and walking through present-day London, when the building or street he’s standing in front of dissolves and is replaced by a photograph of the exact same place in the late 1800s.

It’s striking to see how people lived 150 years ago, which is one of the reasons why these historical reality shows are so compelling.

What lingers, though, is how similar the images are, and how little has changed.

The past and the present don’t look so different after all. That’s the (usually) unspoken takeaway from this wonderful, edifying series, which has artificially constructed a world so that people can experience what life was like for their ancestors, and provided the rest of us with a potent illustration of the cycle of poverty.

Each of the show’s five episodes focus on a different decade, and it seems the participants spend about a week living in that time. There’s a lot of invisible work by the producers, who appear giving the participants options true to the time period.

There’s more interaction with the modern world in this show than I recall from earlier shows such as Colonial House and Manor House. Their slum house is in London’s East End, and some of the participants get jobs with modern companies that have roots in the past. Others sell things to non-participants.

In the second episode, a genealogist talks with one participant about her relatives who lived in the slums, and she visits the graves of two small children who didn’t survive that life.

Victorian Slum House is edifying because it’s not just a history lesson, but is an experience that the participants live and we feel. W

hile they’re in an artificial environment, of course, their exhaustion, anxiety, and worry is very real, pouring out of their mouths and off of the screen into our living rooms.

Their relief when they scrape by, or their panic when they cannot, is all deeply felt.

That is not something the show says loudly or directly, but you’d have to fight hard to not make the connection, to not feel for those who are experiencing this kind of daily struggle to survive.

One participant, an older man, is turned away from a job because of his age, and reflects that this happens “even in the 21st century,” even though there are laws against it.

“How many people have to live like this all their life?” one kid asks. Another kid says, “I couldn’t imagine living like this forever. It’s unlivable.”

But it is life for so many, then and now.