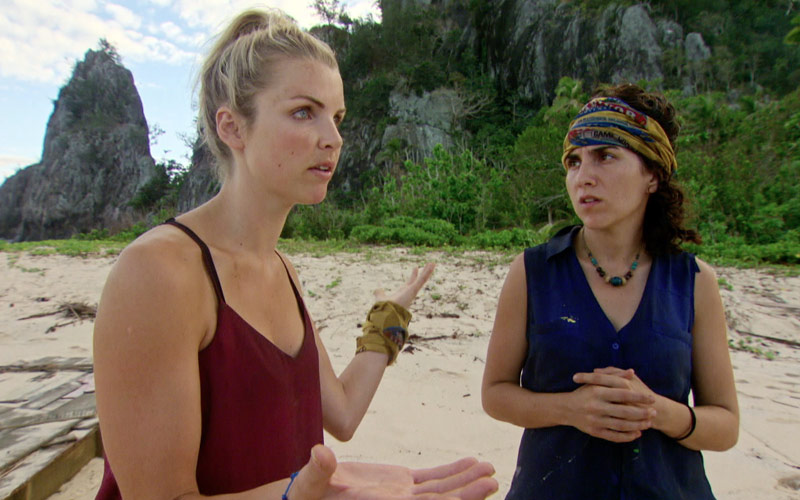 There were two competing philosophies involved in the strategizing on episode nine of Survivor Game Changers, and they were summarized well by two of the players:

Aubry was specifically referring to a strike against Zeke. That philosophy won out: his alliance from last Tribal Council’s Debbie vote turned on him and voted him out of the game. Even Michaela voted for Zeke, and while she knew which way the vote was going, there was none of her typical prop comedy, just tears for her friend and fellow Survivor Millennials vs. Gen X cast member.

The reason Zeke was targeted: “I’ve played four times and Zeke knows this game better than I do,” Cirie said. In his exit interview, even Zeke said “it was a great move,” adding in a subtle reference to that ugly episode, saying that Survivor “it was a tremendously signficant experience. I will forever be a better person because I played Survivor.”

The path to voting out Zeke involved a lot of important but low-key relationship management.

Sierra was willing to do anything to save herself (“I’m going to turn my back on my initial alliance”), while Cirie had to try to convince Sarah to turn on Zeke. Sarah tried to use her secret stolen vote advantage as leverage. She called it “backup,” which confused me at first, but that’s quite clever.

Clearly, something else happened behind the scenes. Zeke’s alliance all voted for Tai, except Tai and Zeke, who both voted for Sierra. We didn’t get any information about those votes, but this theory makes sense to me.

Though I will miss Zeke, and though I think it was a decent move to eliminate a power player when there was still an opportunity, Tribal Council ended with a fantastic capper. “Game changers,” Hali said to Debbie, who said back, “Idiots.”

I don’t agree in this situation, but that exchange seems like it’ll make a perfect GIF to illustrate more than a few Survivor moments.

After last week’s episode, which included a lot of Probst trying too hard to force good television while ignoring the real story, it was nice to return to a simple, classic Survivor episode: two strong challenges, a great reward, clear strategy with a blindside that didn’t blindside us.

The immunity challenge, also a repeat, was less tense than the last time we saw it, though Andrea’s win did seem to give her more confidence as the tribe started their internal deliberations.

I miss truly individual reward challenges, and the repetition of challenges from just last season is not the most exciting, I can see why the production reuses challenges like these. The reward challenge’s combination of individual and team performance, physicality and mental acuity, make for a great challenge.

The only weak spot was that, after 50 minutes of failed attempts to solve the puzzle and its 11-letter word, Probst got impatient and started shouting hints—and by hints, I mean basically telling screaming IT STARTS WITH A WORD THAT IS A SYNONYM FOR CHANGE AND THAT WORD IS REINVENTING AND THE REST OF THE PUZZLE IS HOW THIS GAME IS PLAYED CAN WE GO HAVE LUNCH NOW PLEASE.

After literally saying, “this puzzle is a great metaphor for this season because everything is always changing in this game,” one team started to figure it out, and Probst said, with all seriousness, “could they have pulled it out of thin air?” (Eye roll emoji.)

However, that wasn’t even Probst’s best line. As Sierra was gathering her team’s final numbers from way up high, and when she got the last number, he screamed, “drop her!” Now that I think about it, though, that might have been another subtle hint, this time about how he wanted them to vote.

I also appreciate true rewards like the one the winning team received: a night at the Tokoriki Island Resort (value: about $500/night!) to eat, shower, and sleep in actual beds.

Besides its clearly explicated strategy and character development, this episode also demonstrated Survivor’s exceptional technical work, which it’s all too easy for me to take for granted watching every week, season after season.

But for just one example, watch the editing during the reward challenge:

Wonderful work all around.

Survivor was tied as the #4 on broadcast TV last week, and this episode, while familiar and simple, was an excellent illustration why it is a top-five show (top five!) in its 17th year.