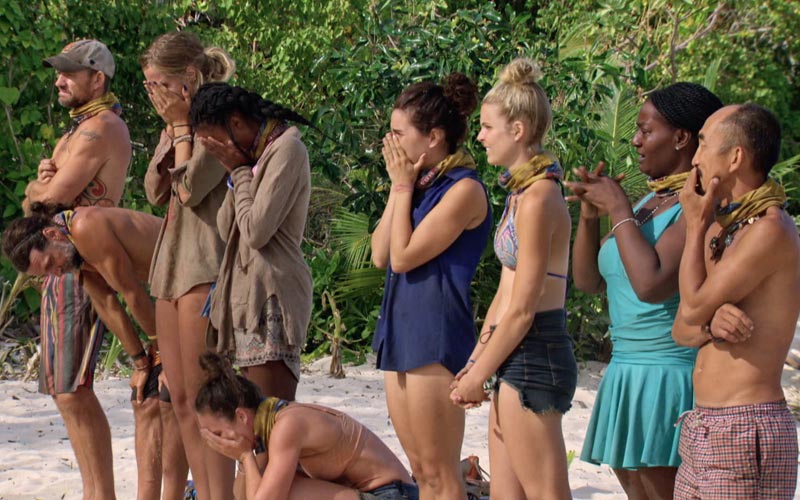 The Survivor Game Changers cast learns they're about to see their loved ones. (Image by CBS Entertainment)

Cue the music, cue the tears, cue the people in clean clothes running out from the bushes to hug and bawl: it’s time for Survivor’s semi-usual loved ones visit.

Not every cast has received a visit from their loved ones, but when they do, it’s quite—um, emotional? Wonderful? Predictable? Dull?

The loved ones visit stirred up a lot of emotions on screen, but not on my couch.

That may be because of the well-documented black hole in my soul, yes, but I think there’s a larger problem: they’ve become stock, predictable segments.

I have no doubt how deeply felt these moments are for the players and their loved ones, and the visit makes it quite clear how starved the players are for irreproachable support, and for human interaction that does not have constant paranoia and $1 million dangling over it.

But as a viewer, it no longer has the same resonance it once did.

Based on my totally unscientific poll, it seems that Survivor viewers are at least split about them; it’s not universally loved.

And yes I’m going to blame Jeff Probst, because if there’s anything more predictable than the loved ones’ visits, it’s me yammering away about Probst’s truly wonderful instincts and talent being sullied by his overreaching.

Loved ones visits: now with lots of exposition

Since he’s become showrunner, Probst has become more and more mindful of creating moments in the middle of the episode.

Survivor has built-in moments, of course—challenge victories, a vote—but since season one, it has also given us a lot of what the production calls “reality”: real moments between people playing a game.

Those don’t happen all the time, so Probst creates more of them, whether it’s in the middle of a medevac that should never have happened or a shoulder massage for a disturbed person.

The loved ones visit is an ideal opportunity for a Moment, because it’s a regular part of the game and a great opportunity to host The Jeff Probst Show again.

The reward was for a barbecue with the winners’ loved ones, but every contestant won the opportunity to have Probst explain their relationships to them.

Probst treats every single relationship as if it is surprising and new, and makes the players explain everything that we can see—and everything that I used to feel while watching.

For example, Cirie’s son ran out, embraced his mom—and was interrupted by this:

“Jared just said something I don’t think I’ve ever heard an 18-year-old young man say, which is, I can talk to my mom about anything. This is typically the time they tell their parents nothing!”

I can’t think of anything more interesting than hearing Jeff Probst’s thoughts on relationships instead of just, you know, watching one.

Wouldn’t Game of Thrones be better if there was a host to step out and explain everything? (Actually, bad example: Yes it would, since I’m easily confused by that show and sometimes turn on subtitles to understand what the characters are saying.)

As Stephen Fishbach tweeted, “The way Jeff introduces these family visits it’s like the entire concept of human relationships blows his mind.”

Probst also treats these pairs like human props: a not uncommon problem for producers who have lost touch with their subjects being real people and all.

Of course he has to host the show and introduce people; that’s fine, and he typically does a great job with his hosting duties.

But here, the efficiency with which he calls people out, narrates their experience, and then shuffles them aside when he’s done with them (“Give him some last love,” Probst ordered Monica Culpepper) makes the whole thing feel like an exercise.

Check off boxes, move on. It’s become so familiar that watching tonight felt like I was watching what happened last season, or any other recent season with a loved ones visit. I have no doubt it is special to the people on screen; it does not feel special to me.

(Update: What felt more special were the times when loved ones got to participate in the challenges—perhaps just because it’s not a regular occurance. But it also makes their visit more purposeful, and gives us more to see about how they interact with each other.)

Worse, Probst uses the emotional attachment for even more drama. Of course, everyone knows the deal: some people will win the challenge, others will lose, and the losers just say goodbye to their loved ones and that’s it.

This episode, the players competed in teams of three, which I thought was a nice way to avoid the expected “pick one more person to join you!” thing, which is torturous for everyone involved.

But Probst did that anyway. Twice. When there’s so much saltwater around, why not rub some into the losers’ open wounds by continuing to make them think they have a chance to spend more time with their loved ones?

Michaela, taking over for Ozzy, kicked at the sand, so I guess that’s a win for this technique and Survivor?

A quick and easy vote

Back to the actual game for a few paragraphs. While The Jeff Probst Show was the major event of Survivor Game Changers episode 10, there were also a few scenes of strategizing leading to a straightforward vote.

The set-up was simple: Cirie and her group were worried about the threat of Sierra and Culpepper, but Culpepper won his first-ever individual immunity, so the votes went to Sierra instead.

It was relatively easy, though the editing did a lot of work to suggest that something else would happen—primarily that Michaela and Tai might join Sierra and Culpepper and turn on the larger alliance.

The most interesting part was Sierra confessing to Sarah that she had the Legacy Advantage, and promising she would will it to Sarah should she be voted out.

Sarah, in brutally efficient fashion, decided she’d keep Sierra on her side and then backstab her. And she reassured Sierra by saying “I love you.” Cut to Sarah telling the camera: “This isn’t about making friends. This is about winning a million dollars.”

It worked, though, and Sierra bought it. “She was honest with me and real with me out here, and deserves to win this game,” she said upon her exit, willing the Legacy Advantage to Sarah.

It was as if Sierra was dangling off a cliff, and Sarah was basically like, Okay, hand me that cookie and then I’ll pull you up from the cliff, and then just took the cookie and stomped on her fingers. That was a move of Probstian proportions.