Skip to Content
Cirie Fields, whose expression was my own throughout the Survivor Game Changers finale. (Image by CBS Entertainment)

“I’m so freaking exited to watch these psychopaths,” Aubry said as she exited the game in fourth place. I wish I agreed. Instead, I fought to remain awake as the final hour of the Survivor Game Changers finale dragged and dragged.

The finale may have delivered some game-changing moments, but it was easily the worst Survivor finale I can remember. And that’s not just because the people I wanted to win went home in the order I would have chosen them to win: Cirie, Aubry, and Tai.

That left a rather dreadful final three of Obvious and Perfectly Fine Winner Sarah, Supreme Ego Challenge Machine Culpepper, and Who Is That Maybe We Can’t See Him Because He Blocked the Camera Operators on Twitter Troyzan.

Since the pre-merge outing episode, Sarah has received the most attention in each episode, with the most obvious winner’s edit I can imagine. No one else has had a multi-episode arc, and the jury confirmed that she’d played an excellent social game combined with strategy, i.e. repeatedly backstabbing people she befriended.

“My personal relationships were 100 percent real,” Sarah said, as the jury laughed, having been played by her. “Yeah, I lied, but it was what I had to do to sit here.”

She was right, and the majority of the jury agreed, making Sarah the sole Survivor and winner of $1 million with a final vote of 7 to 3 to 0.

What happens with a final Tribal Council tie

At the reunion, Jeff Probst finally revealed what the secret plan is for a tie at the final Tribal Council: If two of the final three are tied, then the third person joins the jury and casts the tie-breaking vote.

That came up when Probst wanted the jury to re-vote as if Sarah was out of the final three, which Culpepper resisted, and for good reason. He pointed out that how the jury would have voted then, nearly a year ago, may be very different than what they’d say now. Also, can’t we celebrate that a woman won instead of trying to see how a man could have won?

In any case, the result of the poll was a tie between Tai and Culepper, and Troyzan would have voted for Culpepper, and Probst finally told us what fans have been asking about for years.

Also during the reunion, Probst spent time talking about how Culpepper lost his chance to win after spending time focusing on how Sarah won by copying Tony, who mentored her.

Yes, another female winner, another reunion focusing on men—and this time, how a man was responsible for the woman’s win. Sigh.

The single best thing about the finale for me was the final Tribal Council, which switched to an open discussion format. No more speeches and individual questions, just conversation.

Probst’s introduction was confusing, and he was much more involved in controlling the conversation, which I can see is problematic. But it also focused the conversation to show what the jury values and what they should be rewarding, even if the “Outwit. Outplay. Outlast.” structure was forced.

The end result was still more of a real debate and discussion than I’m used to, and I really appreciated that. It created more interesting exchanges—including between members of the jury, which we’re not used to seeing. Since the jury members sit around Ponderosa and talk about the game, the show might as well let that conversation take place in the open, and that’s what this felt like.

Of all the twists to emerge this season, this is the only one that I hope sticks around.

Cirie got screwed, I was done 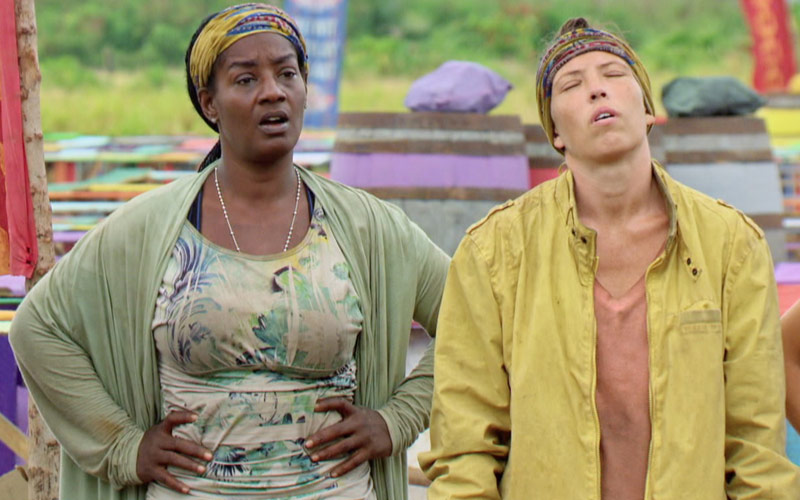 But those first two things happened because of the shower of idols and advantages, which piled up at the end of the game. That meant every single person was immune except Cirie, and she was eliminated from the game without receiving any votes—a game that’s entirely about voting people out!

Idols and advantages have given us many entertaining and crazy Tribal Councils over the years. This was not one of them. This was a travesty. This was a sign that enough is enough with the idols.

If Survivor wants to change the game, truly, it’s time to actually mix it up and leave idols out entirely. At the very least, there need to be fewer of them. This should never happen again.

Alas, this is what I fear happened with idol distribution during the season that was just filmed, considering the drama that having five immune people at one Tribal Council produced:

What was particularly sad is that, without any idols, Sarah would have been voted out. Cirie, Tai, and Aubry teamed up, and the others split their votes between Tai (2) and Aubry (1). That was a remarkable turn for Cirie, who appeared to have blown up her game by attempting to play Sarah’s advantage last week.

But Tai—oh, Tai!—quickly told Sarah the truth after lying momentarily, and Sarah turned on him and even apologized to Cirie. Incredible.

Meanwhile, in the finale, Brad Culpepper ended up winning five total individual immunity challenges—good for him, but boring television—but along with those wins, his uber-arrogance came out (“IT’S MY ISLAND NOW”).

It was directed toward Tai, especially, who he tried to bully into giving up his idols. Tai did not, to his credit—I totally thought he was going to do what Brad asked—and then later chastised Brad: “You’re treating me like a little child, like a little simpleton.” During the reunion, Brad apologized: “We were together, I was frustrated, and it came across terrible, and I apologize. It was awful; I am not a bully.”

Still, that lack of a social game came back to haunt Culpepper at the final Tribal, when he couldn’t really say anything about Michaela beyond the most superficial details, revealing that he hadn’t bothered to get to know anyone, and his passenger all season, Troyzan, didn’t even get negative attention from the jury.

A season without a story

Ultimately, the story of Survivor Game Changers is a season that was the strongest before the merge, and one that kept getting worse, including with this unfortunate event.

Season 34 also never found a narrative arc or storyline. Instead it was a series of crazy moments—some wonderful moments, yes, and some wild and fantastic game play—in search of a season.

The recap of the season at the beginning of the finale couldn’t even find a through line for anything or anyone except Sarah, which only served to set her up as the winner: “since the merge, she has played an aggressive game, bouncing from one alliance to another, taking out anyone standing in her way,” Probst said.

Also at the start, Probst said, “The players lived up to the hype.” Some of them did, absolutely, but this season certainly did not.