“It’s uncanny that it’s so quiet,” Cirie said. “I’ve never seen anything like this.”

That was Cirie talking about strategizing before the first Tribal Council during Survivor Game Changer’s penultimate episode. But she could have been talking about most of the hour, which tried really hard to make something out of not very much—a challenge, a vote, Andrea’s uneventful exit—but was pretty boring.

Also, all she had to do was wait. Because then came the scramble before the second vote, when Cirie’s plans blew up in her face, and blew up Michaela’s game.

What happened was all very confusing, and started before Tribal. It’s late in the season so everyone needs to work on their resumes, and, as Cirie pointed out, “We still have a lot of people in this game that need to go.” Culpepper was the obvious target, but he won immunity.

Tai decided to pad his resume with a vote against Sarah; Aubry decided Tai’s head would look good on her resume, and so she told Cirie about Tai’s plan. Then Cirie told Sarah. But! Sarah didn’t believe her, and Sarah’s confidence led her to give Cirie her advantage.

Because Tai has roughly 121 idols, Cirie then tearily tried to convince him that she was going to use the advantage to save him—thus encouraging him not to play an idol and allowing her to vote him off using her two votes.

It was quite the complicated plan, and so delicate that it wasn’t surprising that it fell to pieces. But it was still a shocking moment.

Cirie attempted to use the vote-stealing advantage to save Sarah, because that’d be a great line item for her resume, especially if she was sitting next to Sarah at the end. But Sarah became the kid who gives another kid a present and then wants it back for themselves. “Actually, that’s my advantage,” she said, and stomped around the Christmas tree until Probst made Cirie read the advantage out loud.

Cirie eventually got to the fateful three words: “this is nontransferrable.” (In a social media twist, Troyzan claims on Twitter that he was the one who informed Probst about the non-transferability of the advantage, and is now upset that he wasn’t given credit.)

The reality sunk in slowly for Cirie: “so she can’t give it to me.” Sarah took it back, and then took Tai’s vote (just to be safe?), and then voted out Cirie’s ally Michaela (just to be spiteful?).

Cue the next Tribal Council Whisper Party. As much fun as those are, I’m wondering if there should be a rule against private conferring. Watching that happen and strategy unfold in real time is so much more interesting than those many, many Tribal Councils when the tribe goes in with a locked-in plan, but it’s also frustrating to not have any idea what people are saying. And the point of having the jury at Tribal Council is that it’s one place where everyone gets the same information.

Though I will show up every day to watch Michaela tell Troyzan, “you have to back it up” and “slide to the side” when he tried to get in on their conversation.

It’s also interesting to me that Sarah did not target Cirie, especially if she was feeling particularly betrayed. I also wonder if Sarah—by giving away the advantage, and then using it—may have blown up her game. She’d already earned attention for her bad acting at Tribal Council, which everyone saw as an attempt to kiss up to Sierra (which worked!). Now she’s the most obvious threat. 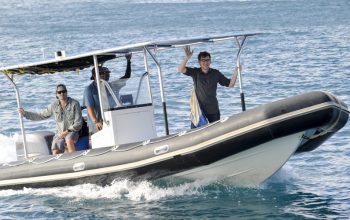 John Cochran didn’t show up on a boat, but was on Survivor in spirit.

Nothing in the first half-hour could match those final few minutes. Actually, the most shocking moment in the first half was not Andrea’s exit, but “I’ll go tally the votes” being followed by a commercial—Survivor, bless it, does not usually do this. It does not subscribe to the reality TV school of creating a cliffhanger out of every possible moment.

In the first half, Aubry won her first individual immunity during a repeat challenge, which was an opportunity for Probst to drool over Cochran, who held the challenge’s previous record, as he told us approximately 121 times.

Aubry did break the record, easily beating Cochran’s 17-minute tower-building record: she did it in six minutes. But she only almost broke Probst, racing to him and giving him a hug after she won the challenge.

Probst narrating tower-building was about the most insufferable narration imaginable, and I say this as someone who finds all of his narration insufferable, because every time a tower fell, he announced it, as if we didn’t see that happen.

Later, during immunity challenge #2, Probst helpfully explained, “That bucket has holes in it,” as water came out of holes in buckets.

I was on a plane—thank you, free Southwest live television—and we were descending during that second challenge, so I had to take my earplugs out of my ears because the pressure was building.

And oh! What a blessing to not hear any more of that. Amazingly, I still figured out what was going on. I mean, I had to, you know, look at my screen, but otherwise I had no problem figuring out who was in the lead or what they were doing. I knew why Michaela kicked her puzzle (she’s a member of the Ozzy school), and I knew that Brad won when he started throwing sand and screaming. “Pick somebody else, people!”

“Even when all hope seems lost, keep talking, because somebody might be listening,” Probst said at the end of Tribal Council #1. Not me, Jeff, not me.