When the show debuted a month ago, I was disappointed: Food Network had not actually created “a fresh reboot,” as it had promised, but instead had just created another studio cooking competition. I saw a familiar, stale formula with the Iron Chef label.

But Iron Chef Gauntlet had something to offer those shows don’t: Alton Brown, who’s at the top of his game here, and exceptional contestants, who bring nothing but the best. In short, it’s the very best of this kind of Food Network competition: no gimmicks, just exceptional cooking under intense pressure.

The chefs challenge themselves to do a lot in 30 minutes—make pasta from scratch, create a merengue, build a smoker and smoke something—and are hyper-creative. As a result, they’re eliminated because of microscopic errors, which shows the level of talent here.

I actually didn’t intend to keep watching after the premiere, but my DVR recorded the second episode, and sometimes I have a need for food competition, so I watched. And I noticed what I’d missed and what became more clear as the series progressed: these contestants are a joy to watch, and so is its host.

Alton Brown at his absolute best 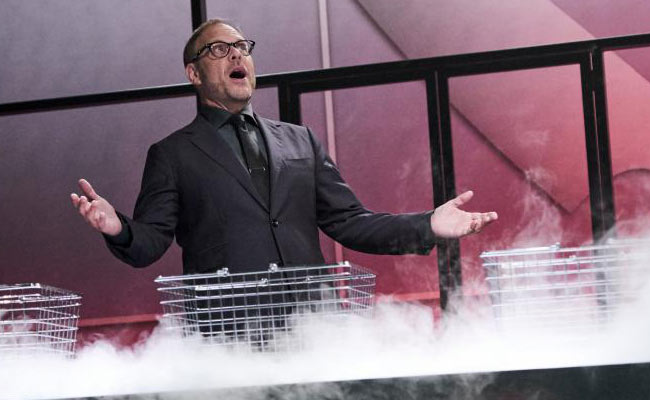 Alton Brown is an unqualified television god, and should be given more shows. I’m not a fan of Cutthroat Kitchen because I feel like it underuses him and also employs his talents in a bit of a mean-spirited way; this show uses him flawlessly.

He gets to do everything he’s great at, and he does a lot of it:

Alton is such a great judge that I miss him in the final act, when two guest judges—often an Iron Chef and someone else—come in to judge and score the final challenge.

Iron Chef Gauntlet is like a familiar dish made with the finest ingredients, and is far better than my metaphor game, which will continue in the next sentence. I look forward to the conclusion and seeing how Stephanie does, and I hope the show becomes a staple of Food Network’s pantry of cooking shows.