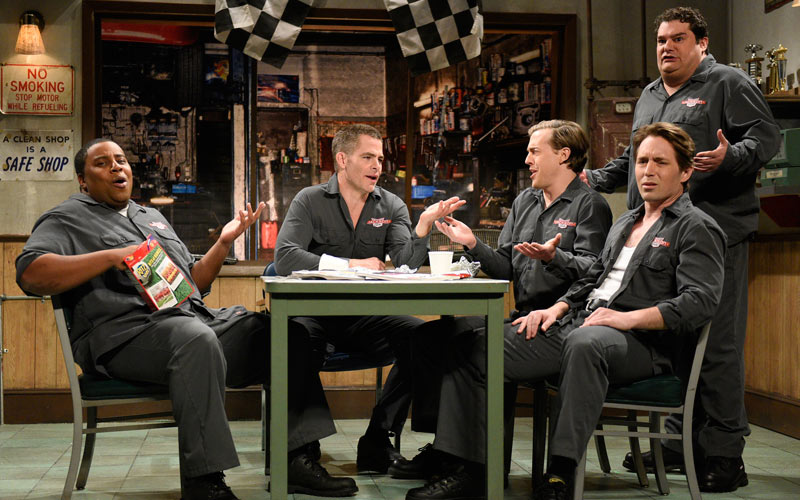 Two sketches on Saturday night’s SNL, hosted by Chris Pine, focused on reality television: one celebrated RuPaul’s Drag Race and the other was set in a Real World-style house.

Let’s look at both.

If you haven’t yet seen Chris Pine in “Auto Shop,” watch the sketch first:

The most humor is in the specificity—they really know RuPaul’s Drag Race, and by “they,” I mean the characters and SNL’s writers—and how it’s revealed layer after layer.

I also appreciate that this is additional publicity for a strong show, and perhaps this sketch is best viewed as evidence that Drag Race is becoming so mainstream that SNL can shape an entire sketch and jokes around it.

But the point? I’m not so sure. Is it that mechanics and/or presumed straight guys are hesitant to admit they love Drag Race? Because they might be judged? Isn’t that a little dated? The hesitation isn’t funny to me, and seems like pretty sad commentary on how people are worried that admitting they like a television show will attract some kind of undesirable label. These characters do quickly embrace their love and knowledge of the show, though only once they realize they’re in a safe space and surrounded by others who agree with them.

Maybe it just points out that the show does have a wide range of fans, so perhaps this was just SNL pointing that out and giving other fans permission to love it publicly. Trinity Taylor, who was name-dropped during the sketch, told Billboard:

“It’s so crazy seeing how diverse the Drag Race fandom is. At DragCon, I just met so many straight men that were with their girlfriends and wives that were just giddy at the fact that they were meeting me. It’s crazy to see how many straight male fans there are.”

The slightly stronger piece for me was The House. Throughout, it demonstrates how nothing can be dragged out into something slightly more than nothing—the power of editing!

But what it mostly does is illustrate all of the absurd tropes that have piled up on reality TV shows, especially soundbites that repeat what we’ve just heard and recaps of something that just happened.

Are those elements are so overused now that the repeated use of those tropes alone is a punchline? Because there really isn’t anything else to laugh at here. That should be a clear signal to networks to lay off this nonsense.