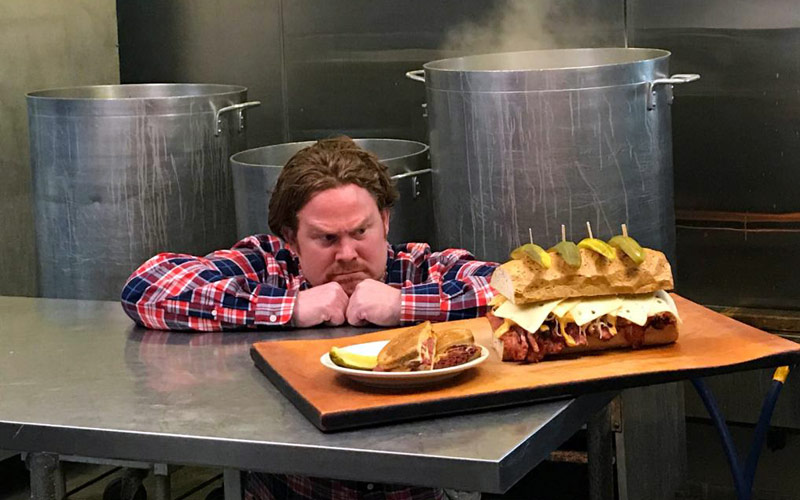 Travel Channel’s Man v. Food will return after five years off the air, but without host Adam Richman. The show aired for four years between 2008 and 2012, and resumes production this week with new host Casey Webb, an actor who’s had parts on shows such as Inside Amy Schumer and Boardwalk Empire.

The show doesn’t yet have an exact premiere date, but the network said it will return in August.

The new show will return to the format of the original show, with Webb taking on eating challenges across the country. Travel Channel described the new version like this:

“Webb continues the quest to find America’s most delicious, unique eats—taking on legendary eating challenges. Original host and food fanatic Adam Richman astounded viewers as he braved dozens of incredible food dares for four seasons. Now, Webb will hit the road in search of hometown hotspots with the spiciest, largest and most amazing dishes on their menus.”

Travel Channel executive Courtney White said in the press release that the show “is a true, pop culture phenomenon that has inspired more than 1,000 new restaurant eating challenges in the last several years. Travel Channel couldn’t resist getting back on the road, visiting cities across the United States, where our ‘Man’ will take on new unbelievable foods and flavors.”

Richman is closely tied to the original series, and some fans on social media were not happy with the change and/or attempt to replace Richman.

After five years on Man v. Food—a show that affected his health, as he wrote about in an essay—Adam Richman hosted other Travel Channel shows, such as Man v. Food Nation and Man Finds Food.

The latter show had its debut delayed for almost a year after an ugly social media exchange that started with him apparently misusing a hashtag and ended up with him telling a woman to kill herself. Adam eventually apologized.

He went on to host two seasons of NBC’s Food Fighters.