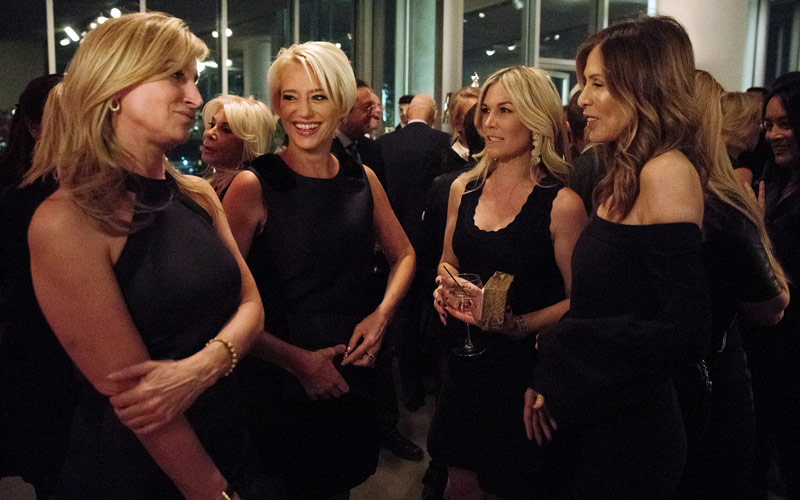 Of the many casualties to come out of November’s election, we can add The Real Housewives of New York City, which is suffering in the first half of its ninth season from a focus on the impending presidential election. The election is just dragging down the show’s ridiculousness into a morass of repetition.

RHONYC seasons always start with a slow burn, as the Housewives figure out who they’ll fight with and what trivial things they’ll take too seriously. That’s one of the reasons why this Housewives keeps my attention: they make a disproportionate deal out of nothings.

Bethenny’s decision to sit out most of the gatherings is probably a smart move, at least personally, but her absence is obvious, and even when she is around, all that’s lingering are bad feelings from last season and its reunion.

A lack of an invite to the Berkshires. Tom. “Please don’t let it be about Tom.” “It’s about Tom.”

So there’s nothing new except the election, and who on earth wants to relive that all over again? Yes, reality is ruining some reality TV, and while I’d normally welcome the bumps of real life into a heavily choreographed show like this, waiting for the election to arrive over five episodes has just been excruciating, not illuminating.

During last night’s episode, “The Politics of Friendship,” the election finally happened. It was at once too much and not enough. Carole and her mother drove to Pennsylvania to volunteer for the Clinton campaign, and we saw precisely no canvassing—just a drive and then lunch. Wow, politics is easy! The tension of watching the returns went by quickly. Carole cried. Ramona made false equivalencies, and also got her face scorched by a laser.

What was new here? What did we learn? Not much.

The little new information that has come up this season, such as Carole’s condescending passion for politics, never went anywhere beyond repeating the same idea over and over again.

That’s something RHONYC gets away with when it’s Dorinda being mad at Sonja for talking to the press, or even about Tom (PLEASE DON’T LET IT BE ABOUT TOM).

But hitting a story beat over and over again instead of advancing the narrative is boring when we know the story’s outcome. Of course, we knew what was coming with the election a mile away, so however you feel about the outcome of the election, watching this play out felt like watching bad horror movie in slow motion, because the conclusion was inevitable.

At least with Tom last season, we didn’t know what was going to happen, so wallowing in that shallow water was kind of fun.